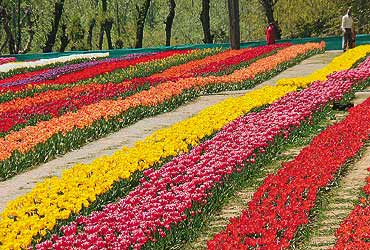 outlookindia.com
-0001-11-30T00:00:00+0553
Srinagar's newest delight is a garden of tulips being laid out in rows in the colours of the rainbow on the slope below the high ridge to the north of the city. Below is the Dal lake and above the famed Chashm-e-Shai springs. Further along the boulevard skirting the lake are the 16th century Nishat and Shalimar Mughal gardens.

A long crocodile of schoolgirls, in regulation white salwar-kameez and headscarf, is walking up the potholed road to the gardens. With them is a smaller section of boys. Each is carrying a banana, a boiled egg and a carton of juice; evidently a school picnic. The children, the few adults among them, the setting—nothing could seem more peaceful. Yet every 100 yards or so, gun-toting uniformed men patrol either side of the path leading to the garden.

The contrast is heightened by glimpses of change; of what could be. For instance, Srinagar's new international airport. Like the tulip garden, it is incomplete, but the gleaming glass-and-steel structure attracts attention. It is guarded by unarmed J&K policemen.

Symbolic of the military presence marring Srinagar is the dilapidated Nedou's Hotel with chinar trees on its lawns. Now the CRPF HQ, entry is barred by two sets of iron gates; the corner rooms have been turned into bastions with slits for guns; inside, there's peeling woodwork.

Nedou's was open when I first saw Srinagar on October 30, 1947, three days after Indian troops flew in to defend the city from tribal invaders. I was lucky to get a lift on a supply Dakota from Delhi. Nedou's symbolised the oasis of communal amity Srinagar represented in the partition-riven subcontinent. At the airfield, Indian soldiers were being transported towards Baramulla in trucks and buses driven by local volunteers. Kashmiri porters were unloading military supplies. National Conference workers were patrolling the streets on which Muslims, Hindus and Sikhs mingled.

Relations between civilians and security forces were usually amicable. The turning point came in 1989, with the induction of and reliance on troops to counter the outburst of militancy. Backed by the Armed Forces (Special Powers) Act, they were free to engage in search operations. This could mean emptying villages and localities of males while their homes were searched for arms. Women could stay indoors but there were many reports of molestation, rape and theft.

In March-April 1990, a human rights team sponsored by the People's Union of Civil Liberties and Citizens for Democracy toured the Valley. Among its members were eminent jurists V.M. Tarkunde and Rajindar Sachar; former vice-chancellor Amrik Singh and well-known Jammu writer and political analyst Balraj Puri. They reported that "the whole Muslim population of the Kashmir valley is wholly alienated from India ... due to the highly repressive policy pursued by the administration in recent months".

The rise of militancy, sponsored, financed and mostly manned by Pakistan, had become an undeniable threat to the Indian administration. Discontent had been festering, with the steady erosion of the special autonomous status promised to the state of J&K on accession. That, endorsed by a series of rigged state elections after the dismissal of Sheikh Abdullah in August 1953, shook confidence in New Delhi.

Much has improved since. The tradition of rigged elections was altered to some extent in 2002; tourists have returned; prosperity is evident, at least in Srinagar; people move freely. But azadi remains a popular slogan.

Official accounts report a marked decline in infiltration of foreign militants. It's courtesy changes in Pakistan and US policies, plus a reduction in local support. But homegrown teenage militants, who come from families which have suffered repression, continue resistance to what they see as Indian occupation.

For them, as for most Kashmiris, the sight of security forces, especially from the army, is a source of alienation. The army's reluctance to reduce their battalions despite waning militancy is seen as fuelled by the benefits of a posting here. Reports of innocents being killed in encounters staged by the army and police lend credence to this view. Officers are known to get rewards and promotions in return for the 'kills' they claim. The army presence in areas lacking militant justification—buildings, apple orchards, grazing grounds and forested areas (some since deforested)—feeds the impression.

Since the downfall of Sheikh Abdullah, who had contested Muslim communal forces, moves to satisfy Kashmir's claim to a special status have been squelched by Hindu communalist forces. Today, the Manmohan Singh government moves in fits and starts; its pace fettered by fears of BJP gains.

New Delhi needs to return to Pandit Nehru's speech of Aug 7, 1952, to regain Kashmiri confidence. He told the Lok Sabha: "We do not wish to win people against their will with the help of armed force; and if the people of Kashmir wish to part company with us, they may go their way and we shall go ours. We want no forced marriages, no forced unions."