For Jha, the acid or Gangaajal is a metaphor for cleansing the corrupt system, a springboard for a violent public movement, of mob frenzy, nihilism and revenge. Problematic but powerful. 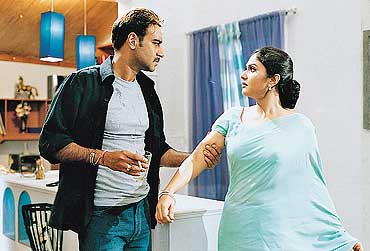 With Gangaajal, Prakash Jha steps into politically explosive terrain. And that's certainly got nothing to do with the fact that Jha's villain, Sadhu Yadav (Mohan Joshi), happens to share his name with Laloo Prasad Yadav's brother-in-law. The custodial blindings in the film recall the infamous Bhagalpur blindings of the late '70s that brought the issue of human rights violation and police atrocity into focus. Jha doesn't quite stick his neck out against the perceived brutality of our law-enforcers. Instead, he keeps the issues of morality, crime and punishment tantalisingly open-ended. The right and wrong are not so disparate in Jha's Tejpur, nor are there any ready solutions. It's this uneasiness which works. Particularly in the frustration, cynicism and many dilemmas of police officer Baccha Yadav (Mukesh Tiwari) who may have done many wrongs but isn't such a bad guy after all. Jha's focus is on the use of violence in a venal, decaying society. So, the build-up to the machismo, recklessness and violence of the "incident" has a definite context. For Jha, the acid or Gangaajal is a metaphor for cleansing the corrupt system, a springboard for a violent public movement, of mob frenzy, nihilism and revenge. Problematic but powerful.

Jha's biggest plus is the detailing of his characters—none of them gets lost in the large canvas. The vignettes of police life, the intricacies of established corruption are well portrayed. It only helps that Jha has talented actors for support. Take DSP Bhurelal who unleashes a lot by not doing anything. Akhilendra Mishra is first-rate in his sheer physicality—the slouch and that potbelly leave nothing unsaid. And, as the idealistic SP of Tejpur, Ajay Devgan literally leaps out at you in that wiry frame. Here's an actor with an uncanny eye for the right script and roles, those which only enhance his brooding, melancholic, intense screen persona.

It's quite a coincidence that two of the best films of 2003 are both set in small towns—vital, throbbing, real spaces than the stuff our cinematic dreams are normally made of. After the violent student politics of UP in Haasil, it's an absorbing shift to a volatile Bihar in Gangaajal. Here on, Jha should never travel back to a Rahul or Dil Kya Kare again.