Will the party wither away? LS 2004 could decide it for a listless Congress. Updates 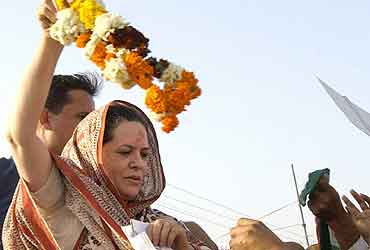 outlookindia.com
-0001-11-30T00:00:00+0553
Even before the battle for Lok Sabha 2004 is joined, the Congress headquarters at 24, Akbar Road wears a palpable air of defeat. Many Congressmen reckon that never in its 119-year history has the party campaign been so lacklustre. It is as if it's merely going through the motions; there's no discernible strategy, no cogent agenda, no credible voice. There is no message and hence the lack of inspired messengers does not come as a surprise.

Not the most ardent of Congress sympathisers believes the party can pull it off this time. And when Congressmen talk of forming a government and pushing their tally to a dizzying 200 seats from its present low of 112, they do so mechanically and with such absence of conviction that listeners walk away doubly convinced that the party is heading for disaster.

Says sociologist Dipankar Gupta of JNU: "Politics is a comparative game. It's a monopoly market where you choose between available products. The Congress is dull and lacks lustre, so the BJP shines." Historian Mushirul Hasan agrees the Congress doesn't come across as a winner. "There's a perceived inability to capture power.... It is not seen as a winning party."

Despite professional assistance, the Congress has been unable to launch a credible counter-offensive. Its ad campaign got off the ground very late—not just because it needed to conserve its scarce resources, but because it took the media committee forever to decide on agencies to handle the account. The ads began appearing last week but lacked the punch of India Shining. Films and cable TV spots were planned, then shelved as the EC ban on political ads on the idiot box kicked in. The ruling party thus got the full benefit of TV exposure (before the ban) and the Congress (by waiting so long to launch its campaign) didn't.

Corporate India hasn't been particularly kind to the party. Treasurer Motilal Vora, CWC member Ahmed Patel, ex-FM Manmohan Singh and strategist-at-large Jairam Ramesh have been asked to raise funds but with little success. The squeeze is being put on party CMs to generate funds; prospective candidates have been told they had better foot their own bills. To the BJP's 20 helicopters, the Congress had booked only seven last fortnight.

Perhaps the worst crunch it faces is in terms of pan-Indian campaigners. It has no one to match the BJP's dazzling array of 'visible' faces. Never has the absence of the late Madhavrao Scindia and Rajesh Pilot been felt more acutely. Malini Parthasarathy, senior journalist, feels Sonia has failed to broadbase the party brass—"As a president with untrammelled powers, she should be more inclusive and transparently democratic, more inclined to collective leadership. She needs to expose her corps more."

Even as Rajya Sabha MP Subbirami Reddy sneered at the BJP's "come one, come all" attitude to film, sports and corporate stars and disgruntled/unattached netas, he was making desperate efforts to rope in names like Govinda and Kapil Dev and prevent erstwhile polestars of the secular brigade from migrating to the BJP. The Congress did manage to bring industrialist Naveen Jindal on board but he ended up embarrassing the party by expressing admiration for A.B. Vajpayee. Reddy's only catch, screen villain Shakti Kapoor, generated many a sarcastic headline about "nayaks in the BJP, khalnayaks in the Congress".

Currently, Congress leaders have fanned out across India—35 regular netas, 35 'yuva netas' and 35 'mahila netas'—to petition for votes. Spokespersons in Delhi, like Jaipal Reddy, valiantly battle negative perceptions: "Tell me where the BJP allies are doing well? TDP, AIADMK, Trinamool, all are in bad shape". In a similar vein, Rajya Sabha MP Kapil Sibal, who's been ranging the country spewing soundbites with desperate ferocity, says: "I've been all over India...it's obvious the BJP can only go down. The alliance factor will work for us."

With all this dizzy jetting about, why isn't the Congress campaign more visible? CWC member Ambika Soni feels the party's strength in terms of regional leaders makes for a more decentralised campaign. Says she: "The BJP is compelled to rely on a clutch of Delhi-based leaders, it doesn't have any regional presence." Congress leaders may draw comfort from such rationalisations, even if true, but the more sensible among them acknowledge these are no substitute for a positive agenda.

Its campaign stars, however, are more keen to animadvert on the damage being inflicted on the health of the exchequer by the BJP's expensive electioneering than pull up their socks. The main problem, observers agree, is the Congress has lost the capacity for reinvention. For the past decade, it has been standing still, unable to find a sure footing vis-a-vis the saffron surge and thus needlessly caught up in caste and religious calculations.

And when the BJP found a development-focused campaign yielded better results than the "riots and elections" model, the Congress was robbed of one of its key issues. The BJP, says economist Y.K. Alagh, has occupied the "growth space". The credit for reforms has been irretrievably usurped by the BJP, leaving the Congress with little to differentiate itself from the ruling party in policy terms. Just a feeble effort was made in its manifesto and vision documents (an idea borrowed from the BJP's 2003 assembly campaigns). "The Congress has the intellectual wherewithal to devise appropriate strategies. It needs to find the nerve to stand up and say one can be both for reforms and social progress," observes Prof Sunil Khilnani of John Hopkins.

Nor has the Congress been able to make capital from the impressive list of scams—petrol pump allotment, UTI, Ketan Parikh, Tehelka, Rajiv Pratap Rudy, HUDCO, land allotment etc—during the BJP dispensation. Although it made scathing remarks about the deputy PM's rath yatra, dubbing it as a "prayashchith" or "kshama" yatra, the prospect of a spectacle that takes the stuffing out of Sonia's roadshow has rattled party leaders.

In the event of the Congress scoring under 130 seats in LS 2004, a question mark against Sonia's survival would be inevitable. Will that be curtains for the Congress? "Sonia's exit may lead to the party's disintegration," says Hasan, for many see in her a "guarantor of its secular-democratic profile". Khilnani holds out hope still: "The Congress is a survivor. In its long history, it has drawn many obituaries; somehow it remains standing. It has endured a wide range of leadership styles: that's an index of how deeply rooted in the political landscape it is."