Gandhi In The FIFA?

Twenty20 World Cup, odd exploits of a Sania Mirza or even a hockey triumph... but the great Indian elephant of sport, like Kumbhakarna, goes on sleeping 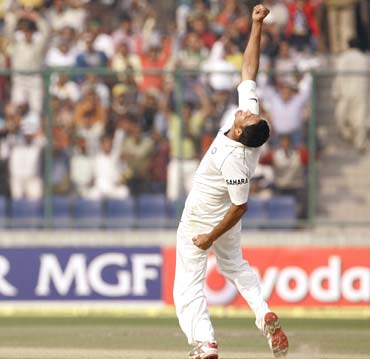 outlookindia.com
-0001-11-30T00:00:00+0553
The most revealing insight into why India continues to be the world’s greatest underachiever in sport came in Durban in November. Gathered in the city’s vast exhibition hall were the great and good of world football, the most popular game in the world.

They had come for the draw of the 2010 World Cup. It was an important moment for South Africa and for world football. If you were a player on the world sporting stage, you had to be there. I scanned the hall and could not find a single Indian face. Then just before the draw for Asia, India’s name’s finally popped up, but in a footnote.

India, we were told, had already been eliminated by Lebanon, a much smaller country ravaged by wars. India’s name was not even going to go into the pot with the other Asian nations to decide which of them might win the right to be in South Africa. Let alone be at world sport’s biggest ball, India did not even have the right to buy a ticket for the ball.

What made India’s absence in Durban all the more poignant was that one Indian was mentioned—Mahatma Gandhi. He was invoked as part of Durban’s rich past as it welcomed the distinguished gathering which included South African President Thabo Mbeki and FIFA president Sepp Blatter. Indeed, I was later told that Gandhi, during his early days in South Africa, had tried and failed to become a delegate for the Natal football federation. Who knows how the story of Indian soccer might have unfolded had the Mahatma succeeded? Could it be that India might have won the World Cup by now but not secured her freedom?

Make no mistake about it, for all the achievements of India’s cricketers, like winning the Twenty20 World Cup, the odd exploits of a Sania Mirza or even a hockey triumph—lifting the Asia Cup in September was no mean achievement—the great Indian elephant of sport, like Kumbhakarna, goes on sleeping. Kumbhakarna did finally wake up. But 2007 held no hope that Indian sport will rouse itself from this state of torpor any time soon.

Indians thought their cricketers would once again mask this sporting failure by winning the 2007 cricket World Cup. Never have I seen a country anticipate triumph so much and experience such a devastating fall. Just before the World Cup, I spoke to a leading Indian cricket official who confidently told me he was not going to Trinidad to see India’s group matches. Instead, he had booked flights and accommodation for Barbados where the later stages of the competition and the finals were to be played. India did not even get out of Trinidad, although I am sure the official had a good holiday in Barbados.

If hubris played a big part in the Indian disaster, it was also due to a failure to realise that just by getting an Australian coach you do not instantly acquire the Australian winning mentality. The entire Greg Chappell episode and his battle with Sourav Ganguly, the final moments of which dominated the early part of 2007, was yet another illustration of how difficult it is to change things in India. His predecessor John Wright, the first foreigner to coach India, did not quite become a Bengali babu, but became more of an Indian and prospered. Chappell, the more assertive Antipodean, did not and paid the price; in the process Indian cricket went backwards.

It is interesting to compare India in the 2003 and 2007 World Cups. Both competitions started similarly for them. India arrived for the 2003 World Cup in South Africa after a disastrous time in New Zealand which left Wright furious with his native country for doctoring its pitches to suit its bowlers. In South Africa, India began very uncertainly but recovered to reach the final. India arrived in the West Indies after humiliation in the one-day series in South Africa. But, unlike in 2003, there was no recovery, suggesting that the coach and the players were not quite in tune. You could say India had two bad days in Trinidad and because of the wretched way the tournament was organised—far too long, too many meaningless matches—they found themselves on the plane home.

But then the 2007 World Cup was an organisational disaster made worse by a Jamaican police force that seemed more intent on media glory than getting an investigation right.

Nobody could have anticipated the death of Bob Woolmer, the Pakistan cricket coach. But the Jamaican police, led by its investigative officer Mark Shields, introduced unnecessary drama into this by declaring Woolmer had been strangulated when the medical evidence did not back this up. This, fuelled by lurid stories from the subcontinent of match-fixing, allegedly responsible for Pakistan’s defeats, fed a media frenzy. And all this was not helped by the way the ICC reacted. Once the police stepped in, they abdicated responsibility in the way other sports organisations like the FIFA or the IOC would never have done.

Indian cricket did, however, recover from the World Cup and the second half of 2007 saw some marvellous victories. In late summer India won a Test series in England for the first time since 1986. Within a month, India won the inaugural Twenty20 World Cup in South Africa with a side that seemed an afterthought, playing in a tournament nobody much cared for.

It turned out to be a wonderful illustration of how India can produce gold from what seemed like roadside dust. Mahendra Singh Dhoni, the novice captain, proved a shrewd leader, helped, not hindered by the absence of the triumvirate of maestros: Tendulkar, Dravid and Ganguly. How odd that these three will never lift a world trophy in their career!

The achievements of Dhoni’s team cannot be overstated. At one stage it looked as if they might not get out of their group, which included Pakistan and Scotland. It needed a cricket shootout with Pakistan to do so. After that, India just conquered every peak they came across. Who will ever forget Yuvraj Singh’s six sixes off an over of England’s Stuart Broad, comparable to Kapil Dev’s mighty 175 not out against Zimbabwe in 1983 that turned defeat into victory and signposted the World Cup triumph.

In that sense, the Twenty20 victory reflected the country. For all the hifalutin talk of coaching and planning, the country’s sportsmen do best when least expected and when their most gifted players are allowed to perform with certitude and without the fear that ordinarily shackles the mind.

But instead of going backwards after such an unexpected victory, as so often in India’s past, Indian cricket went ahead, beating Pakistan both in the one-day and the Test series, the Test triumph being the first at home since 1980.

Encouragingly, this was despite Dravid’s stepping down as captain and the captaincy going to Anil Kumble. His leadership has borne out John Wright’s belief that of all the players he coached, Kumble was the one best suited to captaincy. If Indian cricket can make such a transition without acrimony and still win, it suggests it may at last be growing up. That is not a bad sign for 2008, as it prepares to meet Australia.

(Mihir Bose is a journalist, and is BBC’s sports editor)