The Mahatma's grandson takes his message of ahimsa to the heart of violence, but finds the response mixed 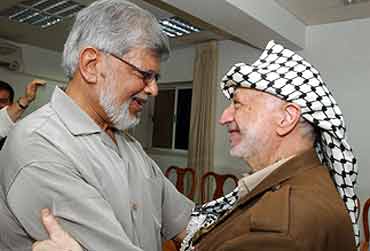 outlookindia.com
-0001-11-30T00:00:00+0553
When newspapers in Israel reported the decision of the Mahatma's grandson, Arun Gandhi, to visit the West Bank and Gaza, there was disbelief at the task he had set out for himself: teach the virtues of non-violence to a people who believe death as their only freedom. This is the land where an invisible wall separates perceptions about violence and non-violence, freedom and enslavement. For Israelis, (state) violence is necessary to curb suicide-bombers intent on blowing up innocent people. For Palestinians, a non-violent struggle is ineffectual against an army which reduces to rubble apartment buildings only because it suspects one of its inmates to have spawned or sheltered a suicide-bomber.

It was to this troubled land that Gandhi, who heads the MK Gandhi Institute for Non-Violence in South Memphis, US, was invited by left-wing NGOs and political groups. These are the people who have been trying to persuade the Palestinians to initiate a non-violent struggle for freedom. And who better to convince them than the grandson of the Mahatma?

On August 27, Gandhi spoke to a rally in Abu Dis. Behind him, the eight-metre-high concrete barrier separating this Palestinian town from Jerusalem; flanking him Palestine Authority premier Ahmed Qurei. As Gandhi began to speak, a youth climbed the wall and lustily waved the Palestinian flag. "This wall which I see here reminds me of the Bantustans (self-governing enclaves) which the apartheid regime in South Africa tried to create," Gandhi said. "I've come here to protest two kinds of injustices, the injustice of a wall and the injustices of prisoners who are treated worse than animals."

In Ramallah, Gandhi asked legislators to lead 50,000 Palestinian refugees from Jordan into Palestine, hoping to violate peacefully Israel's ban on homeless people returning to their land. "Maybe the Israeli army would shoot. It may kill 100, it may kill 200 men, women and children. That would shock the world," he said.

Gandhi's endeavour on his six-day visit was to propagate the liberating powers of a non-violent struggle. But the message was drowned in the twin bomb blasts that rocked the Be'er Shebba in southern Israel, a day after he left. "It ruined his message," said Abd Abu, a senior Fatah activist who attended a low-key reception in the Palestinian side of Jerusalem to honour Gandhi. "He was welcomed better in the West Bank," Abu said.

Assisting Gandhi on the visit was Dr Mubarak Awad, an American-Palestinian psychiatrist who runs the Palestinian Centre for the Study of Non-Violence. Awad believes Gandhi can succeed in his mission only through continuous action. "It's not enough to come and go." The disagreement with Gandhi came out in the open at a reception in Ramallah. The city's governor, Mustafa Liftawi, disagreed with him publicly, saying, "We tried to apply non-violent techniques of resistance. But the Israeli occupation has given us no choice but to use force."

However, Israel peace activist Amit Leshem of Checkpoint Watch, which monitors the behaviour of Israeli soldiers at security checkpoints, was fascinated by Gandhi's address at the Van Leer Institute in the Israeli side of Jerusalem. "The hall was packed, the audience was attracted to his stories about his childhood with his grandpa." Among senior Israeli bureaucrats, Gandhi's visit wasn't viewed negatively even though many thought it was odious to compare Israel to South Africa's apartheid regime. As a senior government source told Outlook, "He came to support the wing among Palestinians which wants to push the militant intifada toward the non-violent path. We hope he succeeds."

But the Israeli media wasn't as tolerant. It dropped Gandhi from its pages the moment he criticised Israel. In contrast, the Palestinian media highlighted his pro-Palestine statements.Indeed, the wall between two peoples in this region is more than just a physical reality.

Scythe In The Field