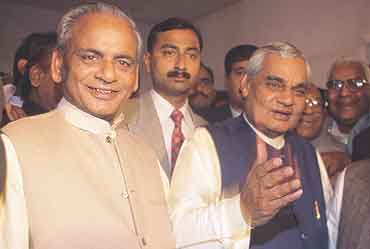 outlookindia.com
-0001-11-30T00:00:00+0553
There's a curious cat-and-mouse game being played out in Uttar Pradesh. All the big political players are devoting as much energy to blocking their opponents making pre-election alliances in the state as in coming to arrangements of their own. The only certainty is the state will be decisive in determining the destiny of the major political formations.

With uncertainties looming on the horizon, the ruling Samajwadi Party has good reason to begin worrying about the upcoming polls. Last week, chief minister Mulayam Singh Yadav and his deputy Amar Singh revealed they have no shortage of friends in the world of business and cinema. Leading business houses like Reliance, Sahara and Godrej announced massive investments in the state. The same evening, all the top guns of Bollywood flew to Delhi for Amar Singh's lavish birthday bash at a five-star hotel.

The scene was somewhat surreal. Amitabh Bachchan, Ajay Devgan, Sunny Deol, Sanjay Dutt, Hrithik Roshan, Sridevi, Dimple Kapadia, Aishwarya Rai, Preity Zinta all trooped up on to a stage. Playback singers Udit Narayan and Sonu Nigam began crooning songs for the birthday boy. A touch of glamour had certainly been added to the grime and dust of UP politics. With so much stardust in the eyes, the emerging political picture looked even fuzzier than before.

The UP scenario is particularly complicated as each party's fortunes will depend on the alliances struck by its opponents. As Rashtriya Lok Dal leader Ajit Singh says, "Instead of becoming clearer, the picture in the state is becoming more unclear as the countdown to the polls begins. There are so many imponderables that no one can predict the outcome with any certainty." Mulayam himself believes it will only be possible to assess the situation once the combinations in the state become clear. Some compare the political picture to a game of poker—where no one is revealing their cards and everyone is bluffing to some extent.

There is, however, a broad consensus that the imminent return of Kalyan Singh to the BJP fold has been the catalyst for the political meltdown in the state. The Lodh leader is the sort of politician who may win a limited number of seats on his own but can tilt the balance in a close contest and damage his opponents. In the 1999 Lok Sabha polls, for instance, Kalyan—who had by then quit the BJP—had helped swing about eight seats in western UP in favour of the SP. His possible return to the BJP could therefore seriously upset Mulayam's calculations.

Masoom Moradabadi, editor of Urdu daily Khabardar, stresses that it will be a mistake to write off the BJP in the state. The party had been in a mess in 1999 and still got 29 of the state's 80 seats, the SP coming a close second with 26. There is, in fact, a view that the BJP is deliberately downplaying its position in UP in order to avoid tactical voting against it by the Muslim community, which makes up nearly 18 per cent of the electorate. Ironically, it is in seats with a heavy minority population that the BJP really fancies its chances. For, if a Congress-BSP alliance materialises, it will be in hot pursuit of the SP's Muslim vote. A close scrutiny of voting patterns in Uttar Pradesh reveals the BJP often scrapes through in a triangular contest not because of positive vote in its favour but because of a division in the so-called secular vote.

Kalyan's return is expected to be formalised in early February. But till all the modalities are worked out, he is in an awkward position. His son Rajbeer Singh and close associate Kusum Rai are still ministers in Mulayam's government. BJP sources say that Kalyan is keen to secure the future of those who have stood by him. Says Rajya Sabha MP Balbir Punj, who has been one of the main negotiators with Kalyan: "Only a few details have to be worked out."

There's no denying that both the BJP and Kalyan need each other. The BJP's fortunes in the state have plummeted ever since his exit. As a former chief minister and high-profile backward leader, Kalyan will certainly attract a section of the non-Yadav, non-Kurmi OBC vote and some of the MBCs (most backward castes) who had been tilting towards the BSP in some seats. Party strategists believe that Kalyan's return is just the sort of boost that the dispirited parivar cadre needs.

All is, therefore, not lost for the BJP. For, even in caste-ridden Uttar Pradesh, there has been a consolidation of a small core of "Hindu" vote that transcends caste and which appears to have been charmed by the general Hindu right-wing rhetoric of cultural nationalism vis-a-vis minorities, Kashmir and Pakistan—if not the Ramjanmabhoomi issue per se. And they can always be expected to rally behind the BJP. However, it ought to be borne in mind that the caste ambit of this minuscule constituency does rarely extend beyond the OBC band. For, in Dalit-conscious UP, the politics of Bahujan samaj is evidently there to stay as a major mobilising and polarising field, one way or the other. That is perhaps also the reason why it's a bit too presuming to talk of a complete desertion of the BJP by the upper-caste vote, particularly in the aftermath of the bitter BSP-BJP divorce. And since it's a Lok Sabha election, the larger national factor—of Atal Behari Vajpayee versus Sonia Gandhi—only serves to further firm up upper caste commitment to the BJP.

Now that the Kalyan chink in his armour has been exposed, Mulayam and Amar Singh are doing their utmost to prevent a Congress-BSP tie-up. Amar Singh, usually quick to target the Congress, now says the SP can certainly "consider giving outside support to a Congress government at the Centre as long as the party continues to support our government in Lucknow". In fact, though the Congress-BSP talks have reached an advanced stage, many state Congressmen privately admit they would prefer a deal with the SP. The SP has, therefore, jumped into the fray and has added to the prevailing confusion.

The party is also bending over backwards to recover its secular image that had been tarnished by talk of an understanding with the BJP that had derived credence from the first affidavit (later replaced by a revised version) filed by the Mulayam regime in the Supreme Court, exonerating the cbi from charges of political partisanship towards some BJP leaders in the Babri Masjid demolition conspiracy case. Last week, Mulayam was categorical in his insistence that there was no question of the SP ever giving support to an nda government. "It is an abuse to me to ask whether I would ever support a party like the BJP," he said. The party's Badaun MP Salim Sherwani was equally adamant: "I don't know how you all keep talking about a secret deal with the BJP. A party like the SP would be finished if we were to ever extend any support to a communal force like the BJP."

The stakes are clearly high in UP. Hence, everyone is working overtime to block everyone else from coming together. It is a curious brand of negative politics. As a veteran UP politician says, "Blackmail is also a factor here. Everyone has some dope on everyone else. Add this to the complex caste and alliance arithmetic and you have utter confusion and conspiracy theories galore."