Deja vu as Modi gets the BJP juggernaut rolling. The disarray in rival camps may help him.

More from Prarthna Gahilote
View All 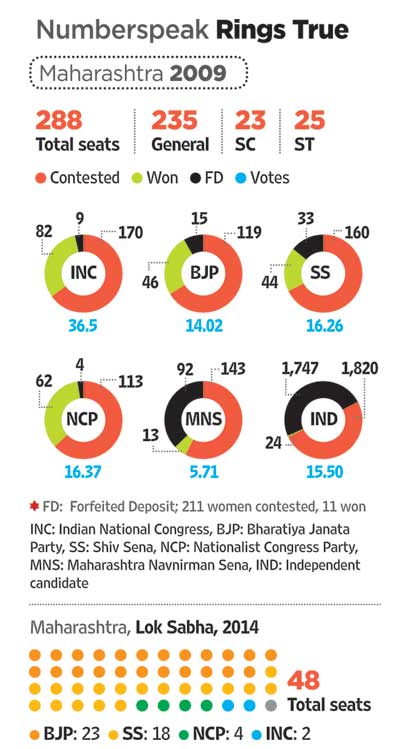 If there is one thing Prime Minister Narendra Modi hates, it is roadblocks in the autobahn to progress he wants to fast-track the country on to. The Lok Sabha election has certainly put him in the driver’s seat, but he wants to be at the wheel in the states as well. This intent is redefining the political map of Maharashtra. A state that had been home to a stable binary of coalitions in recent decades—one centrist, one rightist—is now split wide open. After a handful of reversals in recent bypolls, Modi is pulling out all stops to deliver a majority to the BJP—preferably on its own. Ranged against him is a confusing medley of former (and potential future) allies and rivals, which includes the shattered pieces of another coalition. The outgoing Cong­r­ess-NCP dispensation, at the end of a 10-year reign, looks to be staring down the barrel. As judged from inside the Modi campaign, they’re simply part of the irritants and roadblocks in his path. Remove them, and he’ll deliver even the moon—Mars being done already.

The juggernaut of resources, manpower and rhetoric unleashed by the BJP seems to have caught rivals off guard. The relative strength on the ground is anyone’s guess but it’s created an overall impression of regional parties like the Shiv Sena, the Maharashtra Navnirman Sena and the Nationalist Congress Party being caught in a rearguard action for political survival. Rule by a single party will dim their political relevance, which explains not only their no-holds-barred campa­ign, but also the curious fact of their rhetoric seemingly converging on key themes. The three parties—on different sides till recently—have adopted a strikingly similar pro-Maratha vocabulary against the BJP. Even as that hints at a potential axis, neither the BJP nor the Sena-MNS would be averse to coming together in a post-poll scenario either, should circumstances so demand. The BJP, of course, would like to be the dominant partner in any such coalition.

Vladimir Putin's Hands In The News Again, This Time For Turning Purple