Game For The Show 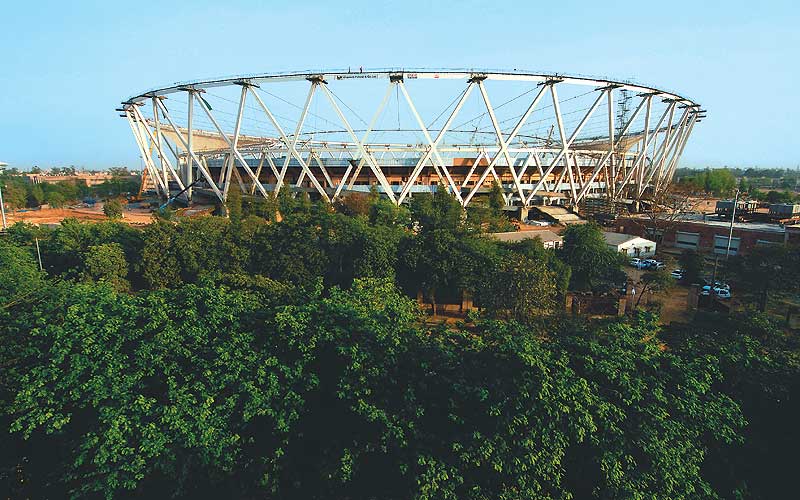 When Ananya Lamba came back to the capital last year, after completing a bachelor’s degree from Pune, she felt cheered by the sense of a new urgency in the air. Says the 21-year-old, “It struck me that flyovers which earlier took forever to be built were now being completed in a matter of months. Roads were being lined with blinkers, they were being widened, lanes were being added.” A new fleet of lime-green, low-floor buses convinced her that the old Delhi of ramshackle public transport that she knew so well was giving way to a “trendy, young and fun city”. This positive outlook might sound strange to Delhiites who have been horrified to see their city turn into one big construction site. What underlies it, explains Ananya, are her memories of Mumbai, where she spent her weekends while living in Pune. “It is such a relief,” she says, “to be living in a city where you’re not stuck in traffic at 11.30 at night, and where nothing’s going to change any time soon.”

For her, the metro station coming up near her home in Gurgaon only underscores the contrast, with its promise of even faster travel. “The only problem I can foresee,” says the management trainee, “is that my folks will no longer listen to my excuses for not being back home on time.”

As Ananya thinks about her future deadlines, Delhi, in the throes of raging Commonwealth Games fever, seems to be finally meeting its own. The city’s new airport, set to be the sixth largest in the world, will start seeing traffic from July. With much of the work on its 128-km-long Phase II now almost over, the Delhi Metro has started handing back to civic agencies roads that it once barricaded. Sporting venues whose deadline-readiness was the cause of concern up until a few months ago are now being inaugurated with impressive speed. As more pieces fall into place, the Commonwealth jigsaw is becoming easier to comprehend. It is also becoming evident that the games will leave in their wake a Newer Delhi; and a wider gap between the capital and other India metros. While the look and the feel of it may not please town planners, who believe that better choices could have been made, or civic rights activists counting the cost of the games in labour law violations and deaths (see accompanying stories), Ananya resolutely says, “My generation is very excited.”

NDMC officials in charge of refurbishing Talkatora are worried more about the neighbouring monkeys than any other glitches.

Compliments like these are music to the ears of Delhi’s chief secretary Rakesh Mehta. “Normally,” he says, “it would have taken us 10 years to provide this kind of infrastructure for Delhi, but thanks to the CWG, we have done it all in three. The citizens of the city will start to see concrete benefits by June.” Mehta promises that with increased water availability (826 MGD to 966 MGD), and a beefed-up capacity to generate 6,000 MW of power, Delhiites will have to fill fewer emergency buckets of water and no student will have to cram by candlelight. It is an assertion that would sound almost obscene to those who run Calcutta, where the Calcutta Electric Supply Corporation finds it hard to meet the daily power requirement of 1,500 MW.

If anything symbolises the new power-rich Delhi extolled by its babus, it’s the sight of the brilliant centre lights of the Talkatora Indoor Stadium coming on. The boxing venue for the CWG is almost fighting fit, with its maplewood floor, glassed-in lobby, rainbow-coloured plastic seats and acoustics that can amplify perfectly the sound of gloves smashing against a boxer’s jaw. It says something that officials of the New Delhi Municipal Council (NDMC), responsible for the refurbishment of Talkatora, seem more worried about bad behaviour by the notorious monkeys that populate the nearby trees than any other glitches. 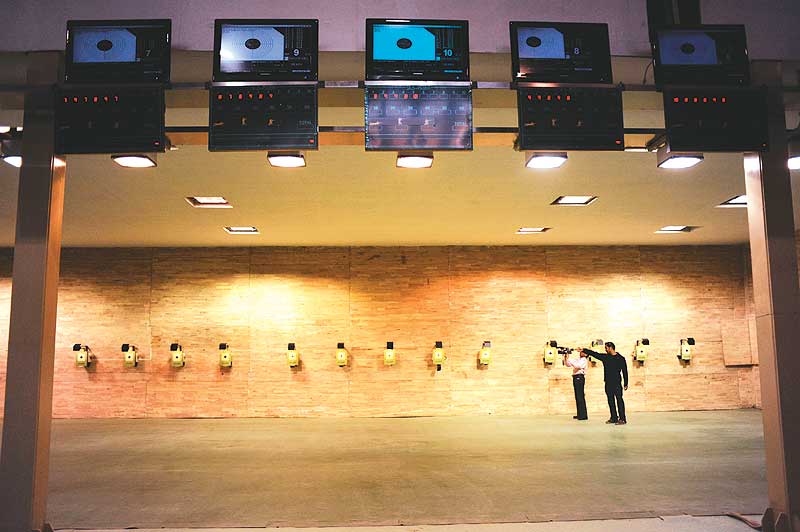 By contrast, the centre field of the Jawaharlal Nehru Stadium, the central venue for all athletic events and the location for the opening and closing ceremonies, resembles a fifth-grader’s volcano model, and the only runner on the tracks is a stray dog. But even before you can ask the obvious question (“Ready by October?”), Union sports and youth affairs minister M.S. Gill immediately says, “We are well on our way to being absolutely prepared.”

Looking beyond the acrimonious debates about delays, ace shooter Abhinav Bindra doesn’t doubt that, post the games, ‘Dilli chalo’ will be the slogan for the country’s athletes. “Compared to other cities,” he says, “Delhi will undoubtedly have the best sporting infrastructure to offer in the country. All national teams will want to be based out of here.” The only regret this Olympic gold medallist has is that only elite athletes will benefit. “At least a third of the CWG budget should have been spent on developing world-class sporting facilities for the grassroots,” Bindra laments.

The length of Phase II of Delhi Metro alone is almost six times the size of the Calcutta Metro’s total route length of 22.3 km.

‘Grassroots? What grassroots?’—the administration seems to be saying, as it massages the ego of the already spoilt Delhiite, to defend an expanding budget (the cost of hosting the games, including the cost of extending the metro, has escalated over the years to a whopping Rs 15,000 crore), partly underwritten by the Centre, and partly by Delhi’s own revenues. Kewal Sharma, principal secretary with the Public Works Department (PWD), says, “The roads and flyovers are not being built for just 15 days. They will solve Delhi’s problem of congestion for good.” Officials are also quick to promise that unlike Mumbai, where flyovers have exacerbated congestion, Delhi’s 24 new flyovers will provide uninterrupted connectivity to and from the Indira Gandhi International Airport.

At T3, the favoured, “global”-sounding abbreviation for Delhi’s new international airport, the sense of space overwhelms the visitor. Look up, the ceiling seems a long way off; look around you, and there are 168 counters stretched across a vast expanse of check-in area for international and domestic passengers. As for the meet-and-greet enclosure, it won’t be easy, even for the large garland-bearing contingents of Indian families who come to receive, or see off, to make this one look crowded. The airport’s 78 glass aero-bridges reek of more glamour than any Indian fashion week. 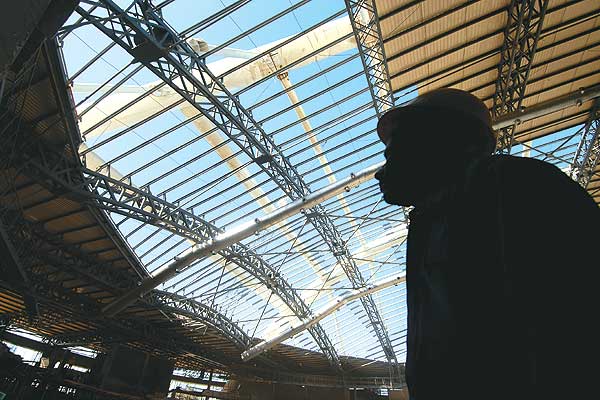 How do other Indian airports measure up? No competition. Even if you were to join together the Mumbai, Hyderabad and Bangalore terminals, T3 would still be larger, with a capacity to accommodate 34 million passengers every year. Airport developer GMR’s chief operating officer, Andrew Harrison, points out less visible features: protection against security threats with a five-tier baggage scanning system, and also, he argues, against peculiarly Indian habits such as paan-spitting. “Once you give fliers large, cushioned, comfortable chairs and air-conditioning, you find that the new environment itself starts to positively impact and improve their behaviour,” he says.

Perhaps the same logic is dictating the transformation of Delhi’s transport systems. With 3,775 new low-floor buses decked with alphanumeric dual displays and automatic doors augmenting its existing fleet (and with its ugly “killer” Bluelines banished), Delhi will have not just better-looking buses, but almost twice as many as say, Chennai; and with a far lower ratio than the southern city, officials claim, of passengers per bus.

However, many travellers may choose to go underground instead. It is perhaps an unfair comparison, given how stalled the Calcutta Metro project has been, but the length of Delhi Metro’s Phase II alone is almost six times the size of its total route length of 22.3 km. While its Calcutta counterpart travels in a relatively straight line, the Delhi Metro twists and turns, in its attempt to provide comfortable access to all the 10 games venues and the new T3 terminal from points as distant as Noida, Gurgaon and Badarpur. 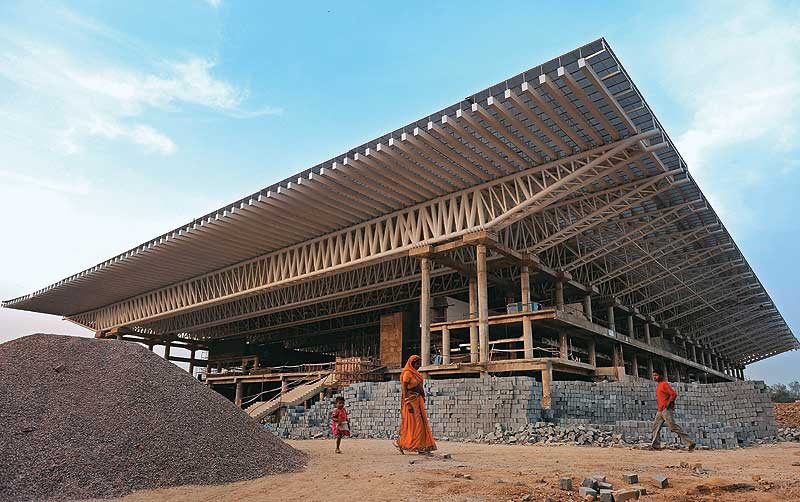 The Thyagaraja stadium, the country’s first to be absolutely eco-friendly, a building that runs 100 per cent on natural gas

Historian and writer Mukul Kesavan, who was a twentysomething during the 1982 Asian Games, believes the metro will be, to the young Delhiite of today, what flyovers and colour television were to his generation then. “The CWG,” he says, “has worked as a kick up the bum. The metro is now coming to South Delhi, the comfortable bastion of the upper middle class, before it was meant to. The chatterati that goes to book launches and drives public opinion will travel the way much of the city already travels and will, hopefully, have a better sense of being connected to all the other Delhis.”

“I’m not happy paying more (for gas cylinders),” says Delhi girl Harshanjali, “but then I’m investing in a city I wouldn’t want to leave.”

Sudhir Sahi, a UNDP consultant for rural tourism, believes that this levelling sense of connectivity will enable a city that’s been notoriously hard to traverse “become the prime gateway not only to India, but to South Asia at large”. Moreover, not just visitors for the CWG, but future tourists too will savour a city with restored heritage, from Mughal monuments to the colonial Connaught Place, spruced-up roads and pavements, new signage, even new cycle paths. The Connaught Place restoration is deeply emblematic of the city’s drive to rejuvenate itself; the gracious Lutyens-era shopping enclave was once at the centre of Delhi’s world, but had lost its lustre over eight decades of neglect. NDMC chairperson Parimal Rai, within whose domain swathes of historic Delhi fall, emphasises that it’s not just for tourists, but for “long-term legacy value”. He says, “The citizens of Delhi will benefit for a long time to come.”

It is perhaps hard for Delhiites to take the long view, especially after being told that they’ll have to pay more for LPG gas cylinders, watches and desi ghee to foot the state government’s Commonwealth bill. But make-up artiste Harshanjali Singh, 27, supports Chief Minister Sheila Dikshit’s move. She says, “I can’t say that I am happy paying more, but I know that I am investing in a city I would never want to leave.” 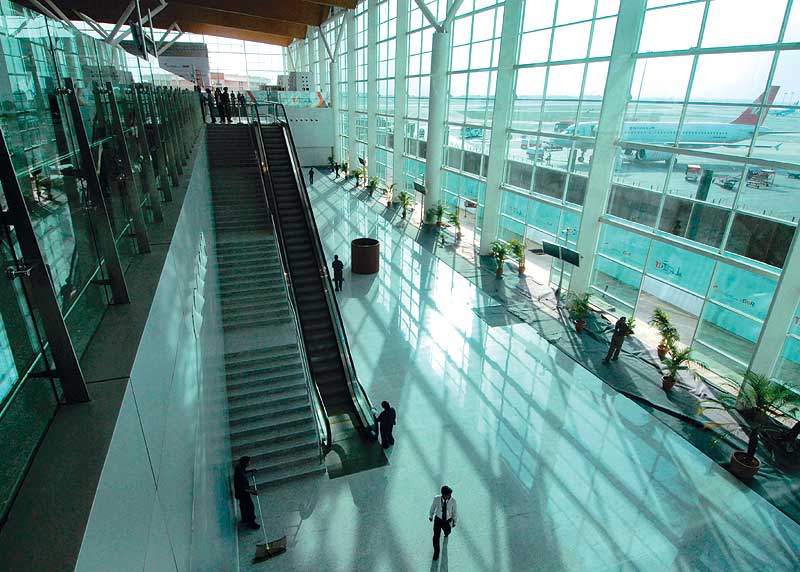 Writer Sam Miller, author of the lively Delhi: Adventures in a Megacity, notices a change in the city’s psyche. “Usually,” he says, “Delhi people care about the area where they live and don’t go any further. But the CWG has set them asking questions like ‘will it or won’t it be right for the city’ and that generates a sense of collective responsibility.” 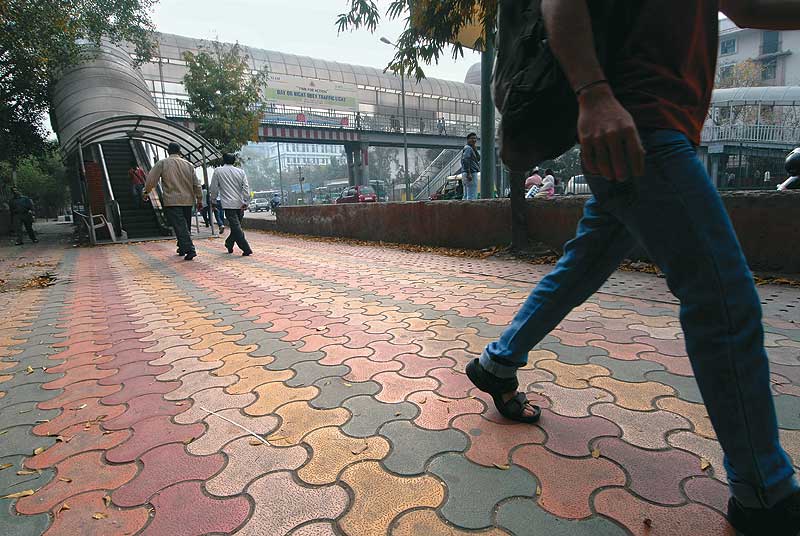 25 of the 30 proposed foot overbridges, among them this escalated one at ITO with newly-laid pavement, have already been built by the PWD

Perhaps they are also less oppressed than before by the grind of daily survival, and have more time to debate and enjoy what the new New Delhi will offer. Delhi’s per capita income stands at an impressive Rs 78,690, leagues ahead of the national figure of Rs 33,283. “There is no shortage of money here, and if the surplus weren’t enough, the city gets hosed with even more money from to time,” says Mukul Kesavan. Rather than asking how Delhi sees itself, says the historian, the question to ask is: How do others see Delhi? Given the extent of the capital’s newly-acquired ‘common wealth’, the old answer—‘with barely concealed contempt’—may well be replaced, at least on some scores, by something closer to ‘with naked envy’.