Indians are superstitious, sexist—'modern' film actors are no exception 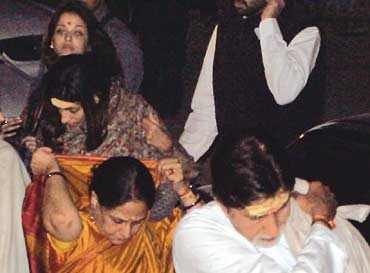 Film stars routinely make news. The Bachchans make more news than most. But in recent days, they have outdone even themselves. Not a day passes without the family featuring on the front pages, on television channels and in party conversations.

So, what's so strange about that, one might well ask. Hundreds of thousands of Indians visit temples every day. They do so to seek blessings for a journey, a marriage, a birth, a new life. To ask for divine intervention in a life crisis and so on. But these aren't your routine run-of-the-mill temple visits. Just look at the list, and then look at what is connected to it. From the Madurai Meenakshi temple in October, to the Kashi Vishwanath, Ram Janki and Sankat Mochan temples in Varanasi in November, to the Brahma Temple in Pushkar in December (where bahu-to-be Ash went alone), to the Siddhi Vinayak in Mumbai in January and, most recently, to the Vindhyavasini temple near Mirzapur in UP. It's a long and impressive list.

Has the Bachchan family then suddenly turned extra-religious? Or have they always been that way? Or is it that they are, like thousands of their compatriots, seeking blessings on the eve of their son's marriage? I'm not sure that we can ask these questions—or even that we should ask them. After all, the Bachchans, like everyone else, have the right to visit temples, or indeed churches or mosques or whatever else they want to visit. But it's precisely because of their public stature that these visits acquire other overtones.

For example, it's hard to escape the conclusion that these repeated visits have something to do with the impending marriage of Abhishek and Aishwarya and with Ash's manglik status. There seems to be a desperate attempt to somehow remove the mangal dosha she is believed to carry with her, almost as if it is her fault that she was born under a particular constellation of stars. It's hard to believe that these are routine temple visits. For, did the Bachchans, for example, visit temples with such regularity when their daughter Shweta was getting married? Or is it that there's something different about the marriage of a daughter and that of a son?

For even though the Bachchans, like anyone else, have the right to their private lives, it's when they make them public, and when the media works hard to do the same, that these questions begin to be asked. Why does it matter so much that a woman, otherwise perfectly articulate, independent, successful, needs the backing of the gods to marry the man of her choice? Look at the characters involved and their stories: both independent, both successful, both modern, both at the peak of their careers, both with pasts that hold other involvements. They decide to marry, a decision no doubt born of a combination of emotion, logic, reason. And immediately, enter the family, enter the pandit, enter superstition, enter the temple.

But why speak only of the Bachchans? These messages are repeated everywhere in our society. We only need to turn our attention to the many serials on television. There's a temple in virtually every home, there are temples that spring up miraculously on deserted forest roads and in the most unlikely of places. And every character—no matter how logical, how modern—runs to a temple to be in discussion with the gods at every step of the way. So no matter that it's the 21st century and no matter that we declare ourselves to be modern, when it comes to personal relationships—more so marriages—nothing serves as well as the gods and their representatives.

So perhaps there's something to be grateful for here, for the Bachchans' temple visits remind us how deep superstition lies in our lives. Can we, in this day and age, really believe that marriage to a tree first will take away the 'inauspicious' nature of someone born under a constellation of stars? While Aishwarya and Abhishek go through their rituals of appeasement, we have the same thing played out in a serial on television, where a man thinks nothing of marrying a perfectly capable woman simply to remove the curse that he is told his kundali carries, for she will then take on the bad luck and he can marry the woman of his choice. And is it surprising that in all of this, it's the woman who is the one up for sacrifice—whether it's marriage to a tree or a life sacrificed, in the end, her sacrifice is needed to make the man happy. Is this the 21st century we are talking about?

(Urvashi Butalia is an author and publisher)