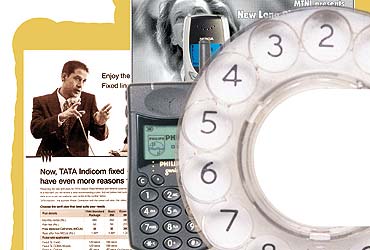 outlookindia.com
-0001-11-30T00:00:00+0553
Ramesh Jain, a Mumbai-based executive, heaved a sigh of relief on May 1, as all incoming calls on his mobile phone became free from that day. He was happy that his mobile bill would come down. Little did he realise that while that may be true, the bills for his fixed line at home would inflate.

In Delhi, the Joshi family has been trying to get a fix on what telecom plan they should opt for in their household. After wading through dozens of plans from various telecom companies, they remain as confused as they were at the beginning of the exercise and have no clue which plan suits them the best.

Lakhs of people across the nation are in a similar quandary. The plethora of new telecom tariff plans being hurled at them by every company in the sector seems to be too complicated for anyone with less-than-genius-level IQ. No one seems to have any idea about how much they would have to pay to call a particular service and which of the various offerings would suit them best. Moreover, it’s extremely difficult to figure out whether their bills would go up or down, whether using a cellular is cheaper than wll (wireless in local loop), or whether Bharti offers better rates than Reliance.

But there are several other complications before you reach such conclusions. Sample this: if you are calling a fixed line from another fixed one, you pay Rs 1.20 per 3 minutes. But a fixed line call to a mobile is charged at three times this rate. Even these would change if you opt for different tariff plans. The rentals too change according to your plan and can range between Rs 250 and Rs 2,000. As your call charges will now include interconnection and termination charges, your billing goes up. Confused already? And we haven’t even come to the 20 different tariff plans from five different companies in each telecom circle, which vary depending on whether you are a corporate or an individual user, how much you call, who you call and what sort of service you call.

Explains T.V. Ramachandran, secretary general, Cellular Operators Association of India, "The confusion is because of the transition from the old to the new regime. This will ultimately benefit customers." Adds Manoj Kohli, president (mobility), Bharti-Televentures, "It’s a temporary phenomenon. We will try to make it simpler for the customer so that he doesn’t have problems."

According to the industry, the general puzzlement was bound to happen as the government and the Telecom Regulatory Authority of India (trai) took too much time to take a decision and then announced things in a haste. Says a Reliance Infocomm source, "trai took two years to announce the iuc regime and did not take essential elements into consideration. There are multiple rates but no education from companies about their benefits. So within days of its announcement, there is already talk of a fresh tariff determination mechanism which will confuse people further."

Kobita Desai, telecom analyst with the Gartner Group, feels that more plans do not necessarily translate into a genuine wealth of choice. Says she, "Giving users more options doesn’t help. It just confuses them more. What’s needed is transparency in tariff plans. The classification between domestic and corporate customers is also not very clear." Agrees Umang Das, MD, Spice Telecom: "Action is needed on simplicity and quick correction."

And how do the consumers feel? Says a top Delhi executive, "I’ve stopped using the outgoing facility from my mobile as I can’t figure out how I will be charged. I’m not sure which tariff plan I’m in now." Another subscriber, happy using his Reliance India Mobile service for the last two months (all calls were free then), says now he is scared to call anyone but a Reliance subscriber because he is not sure what plan he is in, what additional charges he has to pay.

The new tariff regime may undergo more changes due to angry reactions from politicians, many of whom walked out of the Lok Sabha in protest last week. This has forced the government to take another look at the tariff structure. trai is expected to give its verdict on the possible changes next week. Already, trai has reportedly asked Reliance Infocomm and Tata Teleservices, both wll operators, to rework their tariff plans to make them compliant under the new regime. Industry sources contend that trai may also release a primer to help operators simplify plans.

What’s the way out? Industry sources say that soon companies will reduce the number of plans and have only few, clearly classified offerings. Says Ramachandran, "To remove the confusion, some operators are also talking about a common plan." As for now, hapless subscribers are all by themselves in the dimly-lit labyrinth of tariff plans.