A shark-fishing rank calls for responsibility 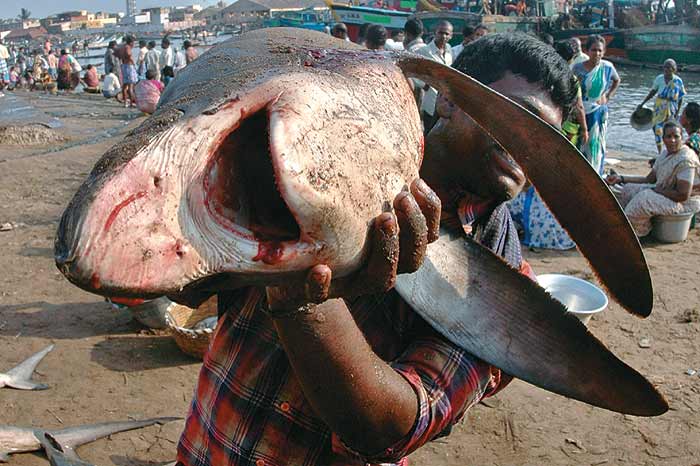 The word ‘shark’ may well be used to describe a rapacious person, but the fate of the real shark seems quite pitiable. Much of India’s conservation efforts focus on the tiger; meanwhile, indiscriminate shark-fishing in Indian waters to feed markets abroad may be driving the shark to extinction. Compiling international data, TRAFFIC (a global wildlife trade monitor) and the Pew Environment Group have ranked India second on a list of the top 20 shark-catching nations. With an annual average yield of over 74,000 tonnes, India accounts for nine per cent of the global catch. It is surpassed only by Indonesia (13 per cent) and followed by Spain (7.3 per cent) in the ranking, announced early this year. A 2008 report had placed India third; to conservationists, the improvement is really nothing to be proud of.

While most people associate sharks with the ferocious kind of the film Jaws, few realise there are over 400 species of shark, many of them critically endangered. In fact, the Union ministry of environment & forests (MoEF) had even banned shark-fishing. However, the ban was revoked in 2004 on pressure from groups representing fisherfolk.

Sharks are often caught just for their fins, made into soups prized in some oriental cuisines and costing over $100 a bowl. They are cut away from trapped sharks that are still alive and the fish is dumped into the sea to die in order to reduce tonnage on the trawler. The practice has evoked much revulsion.

Fins account for around seven per cent of a shark’s weight, but for over 40 per cent of its total value. Though India is the second-largest shark harvester, it surprisingly doesn’t feature on the list of big exporters of shark fins. Samir Sinha, head of TRAFFIC in India, “strongly suspects” this indicates fins are being exported illegally. “Given that we catch over 70,000 tonnes of shark annually, we logically ought to have several thousand tonnes of fins too. But the fins are not showing up in the export data and there is no local consumption of fins,” he says. “So where are all these fins going?”

Ten years ago, member-countries of the Food and Agricultural Organisation’s Committee on Fisheries (COFI), including India, had agreed to adopt the International Plan of Action for the Conservation and Management of Sharks (IPOA-Sharks). This involved creating and executing a “shark plan” to ensure sustainable shark-fishing, but India has made little progress.

Part of the problem, Sinha says, is that there’s no clear data on the species fished in India; estimates are that 18 of the 70 species found in Indian waters are fished. Earlier this year, the MoEF put out a list of India’s critically endangered shark species. It included the Ganges Shark and the Pondicherry Shark, whose populations have fallen drastically owing to indiscriminate fishing, among other reasons.

Sharks are especially vulnerable because they mature late and reproduce in low numbers. Glenn Sant, the global marine programme leader at TRAFFIC, says, “Comprehensive measures to monitor and manage the catch of such species at sustainable levels are therefore required. However, this is not being demonstrated to be occurring in India at this time—or has been at any time in the past. There is great pressure at the international level for the top 20 shark-catching countries to take responsibility. India needs to take such responsibility and only allow for trade in shark products such as meat and fins that have been caught sustainably.”