As if aware of the layers of disbelief readers have accrued in the 300-odd years since Defoe wrote his novel, Martel attacks our cynicism detail by prosaic detail. 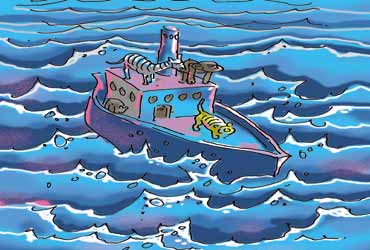 When Yann Martel’s Life Of Pi first landed on my desk a few months ago, I did what a literary editor sometimes does: took a hasty glance at the blurb and title and tossed it into the junk pile. An unknown Canadian writer presuming to write about an Indian castaway with the improbable name of Piscine Molitor Patel, bobbing away in the Pacific with a hyena, a zebra, an orangutan and a 450-pound Royal Bengal Tiger. Puhleez! But curiosity began to war with my judgement when Pi made it to the Booker shortlist. Curiosity won.

On the face of it, Martel’s yarn about a young boy from Pondicherry, the lone survivor—apart from the animals—of a cargo ship carrying his family and their zoo is an unpretentious adventure story. But what Martel has in fact achieved in this deceptively simple book is little short of a miracle: snatched the novel, almost in its last gasp and returned it to its pristine roots. We feel here the pulsing excitement, the thrill of not knowing if his story is real or not, that the first readers of that first novel, Robinson Crusoe, must have felt. Like Crusoe, the story of Pi’s incredible adventures on the Pacific are passed off as a true-life story of a blundering teenage boy’s struggle to overcome and befriend remorseless Nature. But whereas Defoe used a real incident as the kernel of his novel, Pi is pure invention, masquerading as real. So meticulously indeed does Martel work at chipping away at the reader’s sense of disbelief that one finds oneself reaching instinctively for the dictionary to check out more about meerkats living in a million-strong colony on an island of man-eating algae. As if aware of the layers of disbelief readers have accrued in the 300-odd years since Defoe wrote his novel, Martel attacks our cynicism detail by prosaic detail. Leaving us, in the end, like Pi’s sceptical interlocutors from the Japanese Maritime Department, we no longer care if the story is real or not; what matters, as Tomohiro Okamoto tells the narrator, is that "his story is unparalleled".