Fruits Of The Loom

A slowcoach in the new world order, India can get on the textiles map with a garment-driven, export-led push 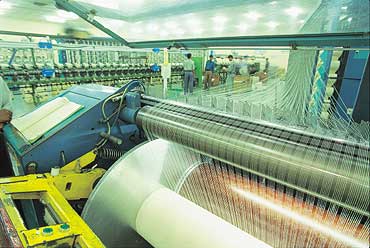 outlookindia.com
-0001-11-30T00:00:00+0553
Circa 1976: One in five families in the Chinese heartland can barely afford a pair of pants a year. Circa 2005: Chinese-make clothing swamps world markets, exporters from places like Bangladesh consider shutting shop. Indian exporters are better off, but only slightly. Says one of them: "China phobia has gripped the world textile industry."

The abolition of the four-decade-old quota-spawning Multi-Fibre Agreement is expected to make global trade in textiles free, fair and enriching. Currently, the global textile and clothing trade is worth $395 billion, and is geared to touch $600 billion by 2010. The US, for instance, imports 85 per cent of its clothing needs, and the EU, 60-70 per cent, says Raghav Gupta, principal, KSA-Technopak. Souring India's happiness is China's share, 17 per cent now, and 40 per cent estimated by 2010. India has a dismal 3-4 per cent now, shared equally between textiles and garments, despite the sector being its largest employer after agriculture and generating 40 per cent of all manufacturing output.

Analysts and manufacturers agree that though India has missed the first-mover advantage, it is certainly not too late to recoup. Says Siddhartha Rajagopal, executive director, Cotton Textile Export Promotion Council (Texprocil): "India has been a late starter compared to China which has achieved awesome capabilities in terms of economies of scale, labour productivity, access to raw materials and infrastructure." Echoes A.K. Jain, GM (commercial), Orient Craft: "China carried out a process of capacity enhancement much before India which lacks enough capacity to meet demand."

The blame, unfortunately, lies entirely with the policymakers. Arvind Panagariya, Columbia University professor, sums up the reasons for India ending up a tortoise in the textile race. "The government was too slow to dismantle ssi reservation. Even when it did, it would not give additional export quota (pre-2005) to the existing efficient and expanding firms, which forced them to start new firms to qualify for the quota and thus forego the advantages of a large-scale operation. The government has also been hopeless on labour legislation. Even the last hope of having a flexible labour regime has been dashed with the latest SEZ Act, which could not give even limited, geographically circumscribed immunity from the draconian labour provisions of the Industrial Disputes Act (IDA) to the firms. How then do you expect entrepreneurs to take advantage of the global production chains of which China is the most important part and from which India is entirely absent?"

In 2004, the US imported $76.6 billion in textiles from around the world. China, at $18.2 billion, led the charge with 24 per cent share, a little less than the total share of Mexico, India, Canada and Indonesia. In Q1 of 2005, India's textile export to the US is believed to have risen 22 per cent. But alongside, profits are sliding as prices have dropped between 8-20 per cent and the industry is braced for a shakeout, with the supplier base already consolidating. The factors that affect importers' decisions now: distance between source and destination, product quality, efficiency of the turnaround cycle. Importers prefer suppliers who have "verticalised" rather than "dispersed" production systems. "Emphasis is now on scale of production rather than fractured holding of production capabilities," says Rajagopal. China, which applies mass production techniques, is gaining. Of the 1,500 Indian exporters, only about 15 have turnovers of over $50 million.

To catch up with China then, or to even be a viable second option to importers, India has to focus on several areas. One, infrastructure. Nearly 37 per cent of total production costs is incurred on power and water use.In China, this figure is 24 per cent. India also has archaic port handling facilities.Large vessels cannot directly dock even in Mumbai or Kochi and have to offload cargo into smaller vessels either at Dubai or Colombo, before being brought to Indian ports. Constant power shortages plague manufacturers.

Second, amendment of labour laws. There is no exit policy in place, as political leaders are reluctant to stir passions in a country with high unemployment. "I cannot employ people for a short period because I cannot subsequently lay them off when the global trade cycle turns," laments Jain. Quips D.K. Nair, secretary-general, Indian Cotton Mills Federation (ICMF): "It's a highway without any exits. Why would anyone want to drive on such a road?" China has virtually no labour laws and a 12-hour work shift compared to India's eight hours. "Our labour productivity is far lower," says Rajendra Hinduja of Bangalore-based Gokaldas Exports which employs more than 23,000 people.

Three, technology. Under the Technology Upgradation Fund Scheme, the grant during the current fiscal was nearly two-and-a-half times the amount granted the year before. "But none of it gets utilised in the manner it is meant to," says Dr K. Rangarajan, professor, iift, "as the technology imported is obsolete". No new technology gets developed indigenously.

But the optimists are growing in number. Says Nair: "If we were to offer 70 per cent subsidy to our exporters like China does, they wouldn't have much difficulty in taking the Chinese over. Also, there is little product compatibility and no market compatibility between the two countries, hence they are not direct competitors." China mainly uses man-made fibre and serves mass markets, while India essentially produces natural fibre and caters to niche segments. India is now number one in man-made fibres, thanks to Reliance, but only number three in cotton.

A recent 'vision statement' prepared by crisil for the ICMF predicts a $85-billion industry by 2010, or a growth rate of 11 per cent, half of it from exports. "It's important that growth in the textile industry be garment-driven and export-led," points out Nair. The inference: move up the value chain. Instead of exporting intermediate stage products, India must aim at goods which are toward the end of the assembly line. "It's important for India not to look at Bangladesh or Sri Lanka as potential markets but as competitors," says Rangarajan. The price-sensitive Latin American market is already a focus for some.

As for the kind of investments needed, estimates range from between $15-30 billion, a bulk of which is to be generated internally. "Increase in fdi will depend largely on the extent to which the reforms process is carried out," says Rajagopal. While Hinduja, who is looking at an investment of $12-15 million in the next 4-5 years, expects an annual growth of at least 20 per cent, Jain is even more bullish and hopes to grow by 25 per cent annually.

The domestic market is also expected to boom with demand for 'high value' branded items and household items to show a sharp increase. Perhaps why yarn manufacturers are moving away from exports and evincing interest in the domestic market as well. The industry, it seems is ready to internally utilise high quality yarn, most of which was earlier exported.

In view of the special safeguard provisions imposed on China as part of its wto entry, India enjoys a chance of covering at least some of the lost ground till 2013. Inundated by Chinese goods, both the EU and US have imposed some kind of sanctions against China in some segments. Panagariya and Jagdish Bhagwati wrote in the Wall Street Journal recently: "The fear of China has begun to moderate in the major poor nations.... India and Bangladesh are confident that they can compete with it even as...wages in China are finally rising. Both plan investments in big mills where scale economies obtain and modernisation is possible." India's cheap and abundant labour holds the key to the textile trophy. We have a comparative advantage in this sector and, as Panagariya puts it, "it is our only hope to turn India from a primarily agriculture-dependent, rural society to an industrial and urban one". Is the government listening?