Frontiers Of The Imagination

The story of the war lies buried with its dead, the debate lives on 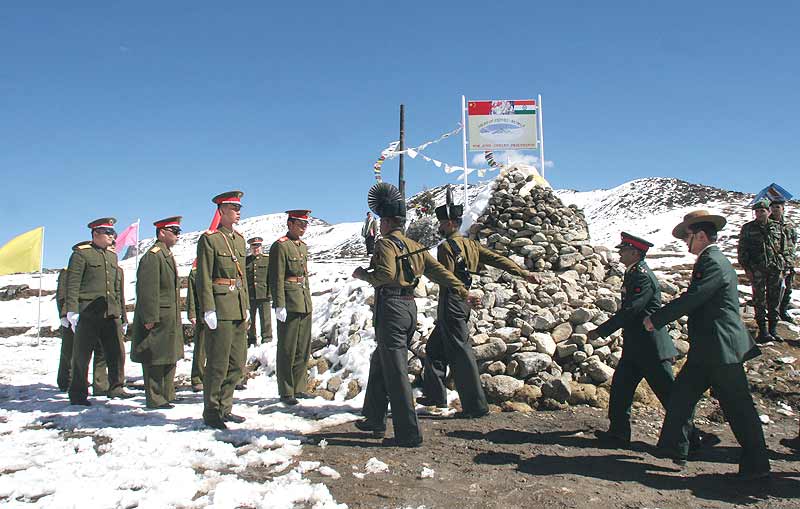 A few years ago I was lucky enough to visit a remote border outpost in Arunachal Pradesh where a sentry sat in the thick morning mist, pierced only by the gentle flares of flowering rhododendron bushes. His binoculars were trained on a Chinese outpost perhaps a hundred yards away. This place had been a minor flashpoint in the 1980s when the Chinese established their camp and started building a helipad. The Indian army set up its own posts on higher ground. Things calmed down, so I was told, when the People’s Liberation Army clarified that the helipad was really a basketball court. The jawan’s job was to watch basketball and he took it very seriously.

Fifty years ago this month, a very different mortal game was played out on those very hills and across the 3,500 km long frontier of the world’s two most populous republics. It ended in a rout, as you know. The bigger guys—or at least the larger team—won. And then left the field, for their dugouts.

The war itself has been well remembered and quietly forgotten in India. A short litany of political ham-headedness, rotten intelligence, poor strategy and entropy under fire—relieved only by a handful of tales of tragic valour, squandered lives. The published accounts and even the poorly concealed secret record (the notorious Henderson Brooks-Bhagat Report) vary mostly in internecine details of personal responsibility and finger pointing. The course of the battles is an open book. Not surprisingly, perhaps, the war is poorly memorialized in a few shabby monuments, and the patriotic fantasy Haqeeqat. Even the signature dirge, Aye mere watan ke logon, has been mawkishly appropriated for other wars and political campaigns. When I visited a sprightly veteran of the fall of Bomdila a few weeks ago, he had nothing to say about the war: “Bad memory,” he said. And then he corrected himself… “Bad memories.”

But if the story of the war itself has been buried with its dead, a livelier (or deadlier) debate persists today about the merits of the two sides’ claims in the dispute and degree of responsibility in precipitating the armed conflict. These are two different things, but given the passage of time they are now intertwined in what was always a dispute about history. Jawaharlal Nehru’s stature has inevitably been diminished by what in hindsight can only be seen as poor situational awareness. His Chinese opponents plainly played a more skilful hand. If nothing else they were clearly capable of both diplomacy and war, whereas Nehru’s final gambit, the ‘forward policy’, proved to be neither.

50 years later, it is on the shared frontier that each republic still reveals its imperial carapace.

It is possible, of course, to go from blaming Nehru for the outcome of war—humiliating defeat—to blaming him for causing it. The stain of failure and ineptitude is easily spread, and many writers, most recently Perry Anderson, have made hay with this messy approach to history. In such readings, Nehru appears as a Peter Sellers-ish poltroon, mouthing verities about India’s immutable spiritual unity with the fastnesses of the Himalayas. “We don’t think who we are, we know who we are,” as it were. Entertaining perhaps, but one might as well represent Zhou Enlai as the inscrutably aggressive Cato. It is better to remember instead that vapid flourishes on the eternal or sacred territories of national soil were flaunted by both sides in the war of words that preceded the bullets. That it was a conversation surcharged with mutual suspicion and the toxic mix of post-colonial nationalism and cold war anxieties.

It was also an argument conducted in tones of exasperating hypocrisy and self- righteousness by two nascent states who were busy fashioning nations on the territories of empires. And 50 years later, it is on their shared frontier that each republic still reveals its imperial carapace.

Trawling through a pile of post-1962 reading recently, I was rewarded by two startlingly similar and diametrically opposed footnotes addressing the same issue: the cultural affinity of the tribes of what is now Arunachal Pradesh with this or that side of the border.  The first claim was made by Neville Maxwell, deftly invoking a colonial authority to assert: “The tribes ‘are not Indian in any sense of the word, neither in origin, nor in language, nor in appearance…it is only historical accident that they have been tacked on to an Indian province’. After independence the tribes began trying to undo that accident, and a strong separatist movement developed in the 1960s.”

The second came from K. Krishna Rao, a former Legal Adviser and Director of the Legal and Treaties Division of the MEA.

“The tribes inhabiting this frontier are of separate stock from the Tibetans; the latter in fact referred to them as Lopas, a term of contempt. Ethnically they are akin to the tribes which inhabit Rajasthan, Madhya Pradesh and Orissa.”

It’s hard to say which of these two attempts at misdirection is more opaque. Indeed, the most obvious similarity in this sad contest is in the domineering paternalism with which the bureaucratic imaginations of India and China treat their frontier minorities. There is little to distinguish the crude pageantry of India’s republic day parade from the popular Chinese new year’s eve TV gala in which Han men appear in business suits while “the minorities are made to appear in their most colourful traditional costumes…The Han thus manifest themselves as the Future, and the minorities as the Past, in a tableau which is utterly political, even if not consciously so.” (We have this from Benedict Anderson, Perry’s brother but no relation in acuity).

Fifty years after the tumult of war, the India-China border remains a perplexing place. Despite occasional minor intrusions and incidents of paper rustling on either side, it has become arguably the most placid of India’s frontiers. Our border with China is longer than that with Pakistan but it seems much more remote. I suspect that the real lesson of 1962 is that the two nations developed an aversion to their proximity. And perhaps to their growing awareness of similarity—in size, national complexity and economic ambition. Like the Aleutian frontier of the USA and Russia, the India-China border has become a common backwater. Hindi-Chini bhai-bhai, with faces averted in mutual recognition.

Back at the sitzkrieg I observed that morning on the LAC, I watched the sentry call in his report on a field telephone. He opened his log and solemnly began to list the day’s incidents:  “Gyara baje, do bande carom khel rahe the…”

Kai Friese is the editor of Geo. A version of this article appears in print

To Uncle, From L’il Pappoo