Through the magical metaphor of carpets, Kremmer does a fine job of chronicling the decline of a once-fabled region. 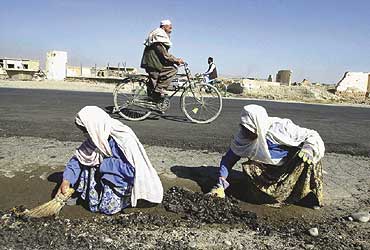 The Carpet Wars: A Journey Across The Islamic Heartlands
By Christopher Kremmer
Harper Collins Pages: 448; Rs 595
Let me put my cards on the table and begin by confessing to a tinge of jealousy. With the exception of Balkh and Tajikistan, I have reported from all the ‘exotic’ places Christopher Kremmer has written about: Kabul, Kandahar, Herat, Peshawar, Kashmir, Iran and Iraq. But when I look at my notebooks full of barely legible, now obscure political details with a shelf-life of a few newspaper stories, I can only marvel at the meticulous manner in which Kremmer documented every waking moment he spent on assignment.

Loosely woven around the Australian-born author’s passion for carpets, the book is actually an immensely readable account of the contemporary political history of South-Central Asia. In between, readers get more than a glimpse of the practical difficulties journalists encounter, in unfamiliar places dealing with unhelpful officials. At the Jordan-Iraq border at Trebil—a crossing I made in March ’98 with almost the same disastrous consequences—Kremmer describes the manner in which officials wanted to administer an aids test with "a gargantuan syringe of uncertain provenance". Fortunately for him, he was allowed to pay a ‘fine’ in order to avoid the jab.

The area covered in the book, from Iraq in the west to Tajikistan and Kashmir in the north and east defies a unifying geographical or political label but has seen more than its fair share of turbulence in the past decade. Everywhere he went, Kremmer found the time to indulge his passion for carpets. While the civil war in Afghanistan is the core around which the book is built, his account of a visit to Iraq soon after a US bombing in December 1998 makes for compelling reading.

Buried within Kremmer’s Iraq narrative is the fascinating, and hitherto unpublished, testimony of Eric Fournier, a senior French diplomat posted to India after spending a year as political advisor to Richard Butler, chief of the UN Special Commission on Iraq (UNSCOM). Tasked with inspecting and destroying Iraqi stocks of proscribed weapons, UNSCOM had become a tool for US policy, and Butler—a mediocre but ambitious Australian diplomat—was a more than willing accomplice. Simply put, Butler used unscom repeatedly to trigger a crisis with Iraq so the US would have an excuse to continue attacking it. So provocative was UNSCOM in their dealings with the Iraqis that UN humanitarian officials posted in Baghdad told me they used to refer to the weapons inspectors as "unscum".

With the US preparing once again to bomb Iraq, Fournier’s account is strikingly relevant: "Why did the bombings occur in December 1998? Well, because Richard Butler reported that the Iraqis had not cooperated with inspections, even though more than three hundred had taken place in a few weeks and only a handful had been a problem. Three out of three hundred did not go perfectly smoothly...the report, drafted like that, was a good excuse for some members of the Security Council to take action".

Fournier also told Kremmer that Butler at one point sounded positive about closing the disarmament issue. But then Richard received a call from the state department who weren’t happy with a positive outcome in Iraq.

Thanks to politics and foreign interference, cities like Baghdad, Kabul, and Herat have fallen upon miserable times, their residents pauperised, their famed merchants close to bankruptcy. Through the magical metaphor of carpets, Kremmer does a fine job of chronicling the decline of a once-fabled region.

Closing Out An Innings