From WACA To Wagah 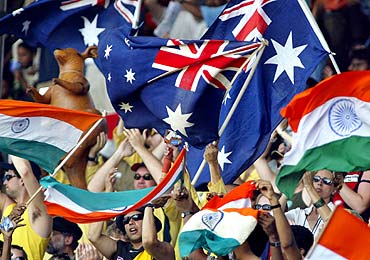 It was a great pity George Bush's flight into India earlier this year overshadowed the visit of Australian Prime Minister John Howard. For, not only can Howard roll his arm over in a manner to shame the leader of the free world, he is aware of the legend of the Amarnaths and is as familiar with Sachin Tendulkar's statistics as the most recent Indo-Australian trade figures.

Indeed, he may well know it was Gogumal Kischenchand who was bowling when Don Bradman scored his hundredth hundred at Sydney in November 1947. He has, after all, been famously described by former Australian captain Mark Taylor as a "cricket tragic" (in this context, 'tragic' means someone passionate, perhaps obsessive, about the game).

While rarely recognised by historians and social anthropologists, a shared love of cricket has been fundamental to the relationship between Australia and India which has matured so strikingly over the past 25 years or so. Indeed, the Australian cricket community had an awareness of India and the Indian diaspora long before Indo-Australia became accepted nomenclature in Canberra and Delhi and in social, diplomatic and media circles.

After all, Frank Tarrant, one of the most significant if unsung figures in the formative years of Indian cricket, was a canny Australian cricketer and entrepreneur. But for his energy and persistence with a belligerent and unworldly cricket authority in Australia, the Maharaja of Patiala's Australian cricket team would never have opened sporting dialogue between the countries with an extensive tour of India in 1935-36.

Writing to the Australian cricket authority from the Motibagh palace in February 1936, the Maharaja of Patiala observed: "Politically and economically, the tour has produced an immense amount of goodwill, and the general public, which has had but vague notions—not always appreciative—has now a feeling of cordiality towards Australia. In view of the changing economic and political circumstances, this, I venture to think, is mutually beneficial for us.... Our interests are bound together by Empire and the prospects of trade between two such developing countries are also very important."

It is not well known that trade had begun as early as 1801 with Australia's first-ever commercial export being a shipment of coal to India. Furthermore, there is evidence that a government store ship, Sydney Cove, was sent to Calcutta in British India in the 1790s for additional supplies. Returning with rice, sugar, tobacco, salted meat, candles et al, it is said to have sunk off the Tasmanian coast. In those formative years, the Bishop of Australia was also the Bishop of India.

Coincidentally, after many years of estrangement, the governments of Australia and India endeavoured to strengthen their relationship throughout the 1980s when Prime Ministers Bob Hawke, another with an abiding love of cricket, and Rajiv Gandhi made reciprocal visits. While the importance of trade underpinned their talks, both alluded to the significance of cricket and its capacity to bond.

In the ensuing years, Indo-Australian cricket has increased markedly and visibly, and has now risen to a heady level. Significantly, the trophy that has been keenly contested since 1996, named in the honour of legendary batsmen Allan Border and Sunil Gavaskar, was initiated not by a cricket authority but by the Australia-India Council, established by the Australian Labour government in 1992.

But it was the game's legislators who first saw the potential of a joint celebration of India's Republic Day and Australia Day which fall on January 26. However, congested international itineraries have, to this point, prevented an annual fixture.

While there has been a steady increase in bilateral trade over the past 20 years and an enhanced appreciation of India's most distinguished cricketers past and present—most notably the incomparable Sachin Tendulkar—there have been many other factors which have seen India rise so dramatically and thrillingly in the Australian consciousness.

Foremost among these has been the attention mainstream media has paid to India's rising stocks following its economic liberalisation in 1991. There is increasing recognition of its profound influence in the world of IT and and high-powered business and it unquestionably is seen as a rival to China as a future superpower.

As a writer on cricket, I have had the good fortune to visit India regularly over the past 20 years. It is very pleasing to write that the attitude of Australia and Australians to India has changed considerably in this time. Perhaps to some degree the new maturity of Australia's elite cricketers has helped to demystify the Indian experience for the wider community. Where these men were once fearful and ignorant, they are now, in the main, aware and worldly and so much richer in every sense.

As the Indo-Australian alliance has intensified, so too has its sphere of influence within the cricket world. Where all cricket authorities once looked to England for inspiration and direction, they now look to the Board of Control for Cricket in India (BCCI) and Cricket Australia (CA). Indisputably, they are the superpowers of cricket's brave and alluring new world.

Of course, there has long been a universal appreciation of the beauty, diversity and unique vibrancy of India. But often this was obscured by the stereotypical images of abject poverty, dysentery and despair, population chaos, pollution and the quest for enlightenment by unkempt and drug-addled western youths.

Thankfully, most of these stereotypes lie shattered as more Australians have availed cheaper air travel packages to explore for themselves the countless wonders of India. It is indisputable that Australia is developing a more sophisticated and substantial relationship with India and its people. Indeed, scarcely an evening passes these days when an Australia company or one of its international parents does not make contact with households in Australia from call centres most likely to be located in Delhi, Bangalore or Chennai or some other thriving megapolis. It is the way of a world that continues to shrink. Both countries have borders to the Indian Ocean and are effectively neighbours.

The popular culture of India—especially the filmic and musical excesses of Bollywood—has become well-known to younger Australians. Indeed, the thrilling performance of the Indian troupe at the closing ceremony of the Commonwealth Games in Melbourne earlier this year has Delhi 2010 fixed firmly in the minds of thousands of Australians.

Australia is among the most ethnically diverse countries and Indians continue to migrate in increasing numbers here. Furthermore, they are also holidaying in greater numbers. The most recent figures from tourist authorities show that Japan, South Korea and other East Asian nations are turning their backs on Australia. But Indians are flocking to the Wide Brown Land, making the subcontinent Australia's fastest-growing tourism market.

While the number of visitors from Japan, South Korea, Indonesia, Malaysia, Singapore, Thailand and Taiwan fell in the five months to the end of May 2006, the number of Indian visitors for the same period leapt 31 per cent to 36,500. India is Australia's 10th biggest tourist market this year. In 2003, it was the 20th biggest.

Unwittingly, perhaps, but Australia at large is honouring the charter of the Australia-India Council which serves to broaden the relationship between Australia and India by encouraging and supporting contacts and increasing levels of knowledge and understanding between the people and institutions of the two countries. These days the very term 'Indo-Australia' bespeaks a warm relationship pregnant with possibilities. May this long be.