From Voodoo To Vaastu... 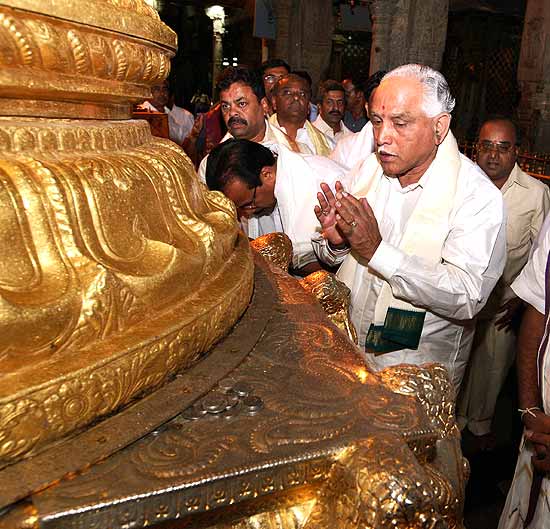 Remedial or precautionary tantric rituals are not confined to the hinterlands of Karnataka alone. They take place at the very epicentre of power and democracy in Bangalore—in the Vidhana Soudha. In the past few decades, various politicians who have occupied the seat of power have resorted to a wide assortment of rituals. In the process, they have made it all look normal and acceptable, notwithstanding their constitutional oath.

A few months ago, when B.S. Yediyurappa was chief minister, he apparently got the east gate of the Vidhana Soudha closed, fearing that his opponent would make an entry from there and usurp his power. Not only is he accused of shutting the gate but also of throwing around consecrated lemons and a sacrificed hen. The local media often splashes pictures of Yediyurappa performing ‘yagnas’ and ‘homas’ in various temples.

Not just Yediyurappa, every CM who has occupied official residence Anugraha, in Kumara Krupa in Bangalore, has altered its vaastu at state expense. H.D. Deve Gowda, S.M. Krishna, Dharam Singh, H.D. Kumaraswamy and Sadananda Gowda—all are guilty of having made alterations to suit their stars. One of them is even said to have sacrificed an animal.

Even the official bungalow meant for a deputy CM or a senior cabinet minister—Cauvery—is viewed as haunted and jinxed. It had remained unoccupied for a long time until rural development minister Jagadish Shettar dared to become its inmate. When he lost the recent chief ministerial battle to Sadananda Gowda, it was attributed to the vaastu of the house he occupied.

An aide of former CM Veerendra Patil says that it was widely believed in the late ’80s that Patil lost power and suffered a stroke because his opponents had buried tantric dolls near the threshold of his private residence. One of Karnataka’s most progressive leaders, Devraj Urs, is believed to have breathed his last in his tantrik’s house.

“Power makes people very insecure; politicians resort to all kinds of things and go to any extent,” a tantrik who boasts a VVIP clientele told Outlook. The number of people who perform tantric rituals has gone up in the last decade, he adds. “All and sundry perform it. It isn’t effective any more. It’s an attractive business idea that plays on the insecurities of the rich and powerful.”