From The Barrel Of A Shotgun

And now, an angry missive from the BJP's star MP Shatrughan Sinha 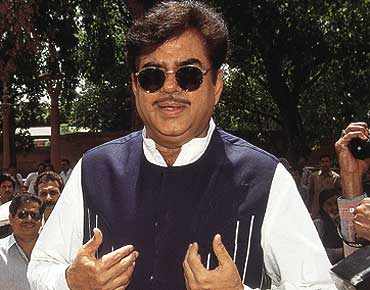 outlookindia.com
-0001-11-30T00:00:00+0553
Shatrughan Sinha has a reputation of not mincing words. One of the first film personalities to join politics—and pursue it seriously, the bjp Rajya Sabha member has been miffed with the PM for he believes that his star-power is used for campaigning and he is then overlooked. Sources at the bjp headquarters informed Outlook that one of the reasons Vajpayee is so livid and off-mood is a letter Shotgun had shot off to him in early May. The letter is political dynamite as it attacks the Vajpayee regime on all fronts. But as the star—known to keep his distance from the political press—refused to reveal its contents, Outlook procured a copy through some highly-placed individuals in the government.

The letter begins by saying that "till today I have never asked for anything. Nor have I ever gone to the press with my grievances. Please understand that I am neither expecting nor demanding anything. If you were to make me a minister in the fourth expansion it would be a matter of shame for me".

He says the reason he was drawn to the bjp was because he thought it to be a party with a difference. "I was attracted to the bjp because it was a party with a straight and clean record..." But then the process of disillusionment began. "After Tehelka, the telecom scam, the bsc scam, the customs scam and so on we are no better that the Congress."

The letter is a direct attack on the prime minister’s management. Sinha writes: "You had an opportunity to wash your hands off this dirt when the Opposition demanded a proper investigation...you should have agreed." There’s even more harsh criticism: "Turncoats and downright depraved individuals were inducted into the council of ministers at the cost of dedicated party workers..."

It’s no holds barred when Shotgun offers his take on the Balco sale. He says "the ghost of Balco refuse to go away. The impression is that the government sold a profit-making psu for petty personal gains". As if that were not enough, he adds: "When charges were made against the pmo, why did you not initiate an investigation vis-a-vis certain individuals in the pmo."

Sinha also has some strong words for the growing culture of caste politics. He writes to the PM: "The party and its leaders had claimed to be above caste. But many able individuals were overlooked when you made Bangaru Laxman the party chief on the basis of his caste." That Laxman was tainted in Tehelka only adds punch.

Harsh words are also reserved for the handling of the bsf-bdr skirmish: "When our bsf jawans were killed in Bangladesh, our government was more worried about Sheikh Hasina’s survival. Our response was too little, too late." He adds: "The day is not far off when Sri Lanka, Bhutan and Myanmar will frighten us..."

He raises a pertinent point about dynastic politics: "Our party was against dynastic politics. I have great respect for the late Rajmata and Shri Jaswant Singh (both whose offspring were given bjp tickets) but even the likes of Hukumdeo Narain Yadav now get tickets for their children..."

And he rounds up by getting back to corruption once again. He laments the bjp’s into a cesspool of graft and deceit: "We were against corruption. But we’re now surrounded by thieves. We take support from the likes of Jayalalitha and Sukh Ram. In UP, tainted and corrupt individuals have been made ministers."

The conclusion is tongue-in-cheek. "I being a soldier of the party can’t digest you name being sullied. People are blaming us for not taking prompt and remedial action. "

A Man Dwarfed By His Shadow