From Tangra with Love

Run by Hakka Chinese, but the cuisine, generally, is what a Calcuttan might call "chow-chori"... 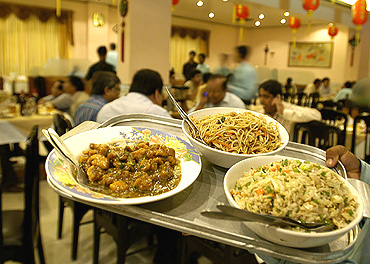 Tangra is a bizarre place. With its maze of fortress-like concrete walls, it’s like a scene from a 1960s spy thriller. And you half expect to find Dr No lurking around the corner, planning death with refinements. It also has the highest number of Chinese restaurants per square yard. And everybody seems to have their own personal favourite. Which is the best? Shun Li? Beijing? Kimling? Kim Fa? Big Boss? It’s the subject of endless debate.

But Tangra’s not for food snobs. The restaurants may be run by Hakka Chinese, but the cuisine, generally, is what a Calcuttan might call "chow-chori", an exuberant collision of Indian and Chinese flavours and ingredients, calculated to delight the Indian palate. The queen of Tangra is Monica Liu, who runs two of the best restaurants here, Beijing and Kimling. Beijing has some interesting and unusual dishes based on Ms Liu’s secret recipes, like Thai Chicken, Fried Meatballs and Peking Chicken with Hoisin Sauce. But best of all is perhaps the Special Duck Roast. Meanwhile, we hear that now there’s a restaurant in New York called Tangra Masala, serving up Indian-Chinese food to New Yorkers!