From Silly Point To Long On

A patchwork run through India’s Test history has great anecdotal charm, but is repetitive 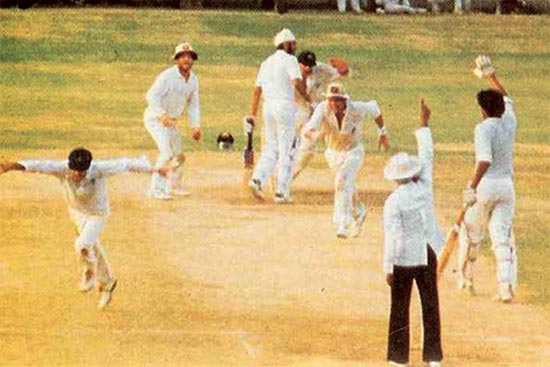 West Indies, the first team to play in India after Ind­ependence, had to wait till the fourth Test in Chennai in January 1949 to record their first win. India came within six runs of squaring the ser­ies in Mumbai, but they finished with 355 for eight, thanks partly to rival skipper John Goddard’s time-wasting tactics (at one stage, the wicket-keeper ran to the boundary to fetch the ball). And partly to the decision by the Indian umpires to call off the game with two minutes (at least one over) rem­aining. In fact, umpire Joshi not only got the time wrong, he even miscounted, all­owing only five balls in what turned out to be the last over.

This landmark Test match is the starting point of the book; it was an early indicator that India would go for targets in the fourth innings with vigour. So much so, say the authors, that “it became a common joke to say that India ought to play their second innings first”.

This story of Indian cricket, told through 28 landmark Tests, like the tied Test of 1986, is as much a tribute to players as to the mediums that carried them to us.

It wasn’t so long ago that cricket meant only radio commentary and newspaper reports. Television and the internet have brought Test matches into our drawing rooms and the palm of our hands, and this story of Indian cricket told through 28 Test matches is as much a tribute to the players as to the mediums that carry the matches to us.

Fans of an earlier generation saw the game through the eyes of men like Pearson Surita, Anant Setalvad, Dicky Rutnagur, V.M. Chakrapani, their voices heralded by All India Radio’s signature tune.

This, the authors, colleagues at the Azim Premji University, tell us, was composed by the Czech refugee Walter Kaufman in Raga Shivaranjani. It is the kind of detail that you look forward to reading in the description of the Tests. But perhaps that number does not lend itself to the gradual unfolding of a Test match, complete with breaks for tea. Giridhar and Raghunath, who bring an obvious passion into everything they write (their earlier, Mid-Wicket Tales, was both quirky and fun) are clearly lovers of Test cricket. But the format of the essays is more limited overs, short and sweet. Perhaps it is a technique to attract the T20-loving millennials to Test match cricket.

This is an Indian quilt of a book, a patchwork history lovingly stitched together with threads from cricket writers, commentators, players, Wisden and Cricinfo. The flip side of such self-conscious objectivity, however, is the repetitive nature of the essays, where statistics sometimes dominate. The authors do speak to some of the actors in the many dramas described but insights are often of the “bowling-in-the-right-areas” variety. Perhaps, they needed to have brought themselves into these essays more; after all, the stats are available online. When they appear in the stories, the anecdotes charm and the book becomes as much about “India watching (as) about India being watched”, as Gideon Haigh obs­erves in the foreword.

Yet, in the context of an effort like this, which involves much collecting and collating, these are minor cribs. The audience is clearly the youngster who is IPL-obsessed and whose history doesn’t go beyond Mahendra Singh Dhoni (I know of at least one cricketer who, when introduced to Sunil Gavaskar, said, “Oh yes, you are the commentator”). The matches are well chosen, 13 of them at home, and there can be no complaints about the industrious manner in which they are put together.

All of India’s cricketing  greats find their place here, from Lala Amarnath to Anil Kumble, from Vinoo Mankad to Virender Sehwag. The suggestions to keep Test cricket alive are both heartfelt and practical. “Our memories of watching Test matches from the 1950s are of the gaiety of a festival that pervaded Indian grounds,” say the authors. “Yet for some years now, expectations of a victory every time India take the field have assumed jingoistic proportions.”

Their book, where fighting draws are shown to be as exciting as India’s victories, is an antidote to such monorail thinking.