Manmohan Singh would rather abandon his post than his principles. Speculation begins again. 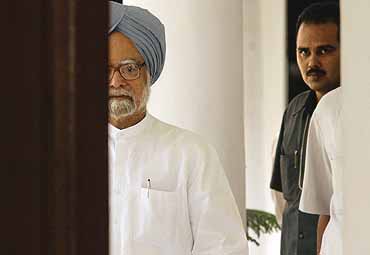 outlookindia.com
-0001-11-30T00:00:00+0553
Manmohan Singh is not a man who takes failure, or criticism, lightly. In his long career in government, as economist and politician, he has threatened to quit—or indicated as much to those close to him—at least six times. The first occasion was in the late '80s, when he was deputy chairperson of the Planning Commission, and Rajiv Gandhi, the prime minister of the day, called the commission "a bunch of jokers". Then, as finance minister in P.V. Narasimha Rao's government in the '90s, he threatened to resign twice, once shortly after 'Big Bull' Harshad Mehta's scam broke and, again, when there was pressure on him to roll back fertiliser prices. As PM, he threatened to step down first when the Left parties tried to block the Indo-US military exercises in November 2005 and, again in June 2006, when his own party, the Congress, wanted him to reverse the hike in petroleum prices.

Speculation about his desire to throw in the towel surfaced again, just after the Left parties expressed their categorical opposition to the Indo-US nuclear deal in August 2007. But Union parliamentary affairs minister Priyaranjan Das Munshi had dismissed the "rumours" that time, saying, "Our prime minister will complete his full term. It will be a very successful term. The PM is firm to deliver as the prime minister till the last day."

It didn't stop reports of a "deeply unhappy" PM doing the rounds till two months after, when it looked as though the "pause" button had indeed been pressed on the nuclear deal. Asked to respond, freshly appointed party spokesperson and MoS Shakeel Ahmed said, "(The prime minister) has the full confidence of the allies and there is no question of either him or the government resigning."

Be that as it may, the opposition to the nuclear deal remains the most serious challenge yet thrown to Prime Minister Manmohan Singh's authority. So even though party spokespersons have ruled out his exit in public, many wonder if he will be able to stay the course. When asked whether he'd step down at the Hindustan Times Leadership Summit, the prime minister brushed aside the question lightly, saying, "You are suggesting a course of action."

Government sources are convinced that the PM may understandably be deeply distressed and unhappy, but he won't quit. A minister close to the PM and Congress president Sonia Gandhi said: "Of course, the PM is very unhappy and someone who would not stick to his chair. But for him to insist on resignation would not be fair—he would be letting down Mrs Gandhi who has done so much for him. He would also be letting down the party, by plunging it into a crisis, because, frankly, there is no suitable replacement."

The fracas over the nuclear deal has not exactly sent out the right signals to the US or the western world. But letting Manmohan Singh go would just make it infinitely worse.