Home  »  Magazine  »  National  » Covid-19 Centre State »  From Field Hospitals To Relief Packages, How States Are Combating Corona With Their Own Set of Rules

From Field Hospitals To Relief Packages, How States Are Combating Corona With Their Own Set of Rules

Big or small, rich or poor, the provincial constabulary is shouldering India’s campaign in a world war 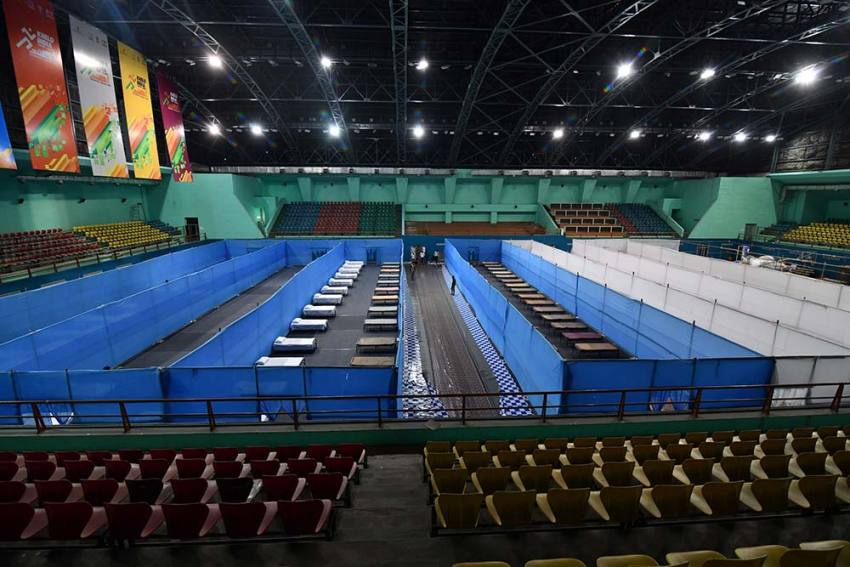 Sarusajai Stadium, Guwahati
Bhavna Vij-Aurora, Preetha Nair April 10, 2020 00:00 IST From Field Hospitals To Relief Packages, How States Are Combating Corona With Their Own Set of Rules 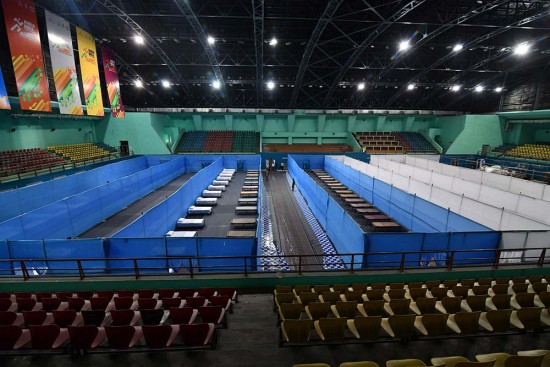 They were clapping, hooting, whistling, blowing into vuvuzelas—a crowd of 33,000 football fans rooting for a goal, expecting a cliffhanger ending. But the Chennaiyin goalie fisted out a full-booted volley, the best chance NorthEast United had that evening in 2016. They lost a home game. At Sarusajai Stadium in Guwahati. Similar scenes—idyllic, except for the context—played out again this February. Sarusajai hosted the Filmfare Awards. That, of course, was then. The world has changed. The shadow of the coronavirus pandemic has lengthened across India. The stadium has morphed into a field hospital: a quarantine centre, with rows of 1,000 beds under a tarp-covered longhouse shaped like an inverted U. Masked workers and overseers in hazmat suits have replaced the excitable football fans.

The beds—their neat white sheets gleaming under the floodlights—are empty for now. But the threat posed by the pandemic has never been more stark. The stadium provides a panoptic view of what lies ahead. How our states, which are no stranger to deadly outbreaks, are responding to the evolving crisis. The response varies from state to state, from Centre to states.

A state like Assam, with a smaller population and lesser number of infections, is better prepared. That is what it seems from the government’s bulletins: 5,000 beds with ventilators reserved for COVID-19 patients, a stockpile of 4,000 personal protection equipment (PPE) and 5,000 more on the way, nearly 37,000 N95 masks and 700,000 triple-layer masks. It has 28 active cases, as on April 8, while the tally for the entire Northeast was 33, with Nagaland and Sikkim yet untouched by the 21st-century plague that has forced half of humanity indoors. Assam is also considering issuing entry permits to regulate the number of people entering or passing through the state once the lockdown is lifted. The NE has a geographical advantage—the narrow ‘chicken’s neck’ that joins the region like a train coupling with the vastness of India. Self-isolation leads through a highway and a railway line on that strip. Block these, all movements stop. But even an airtight seal isn’t a copper-bottomed guarantee against the virus rebounding post-lockdown. Singapore and Hong Kong are grim reminders. 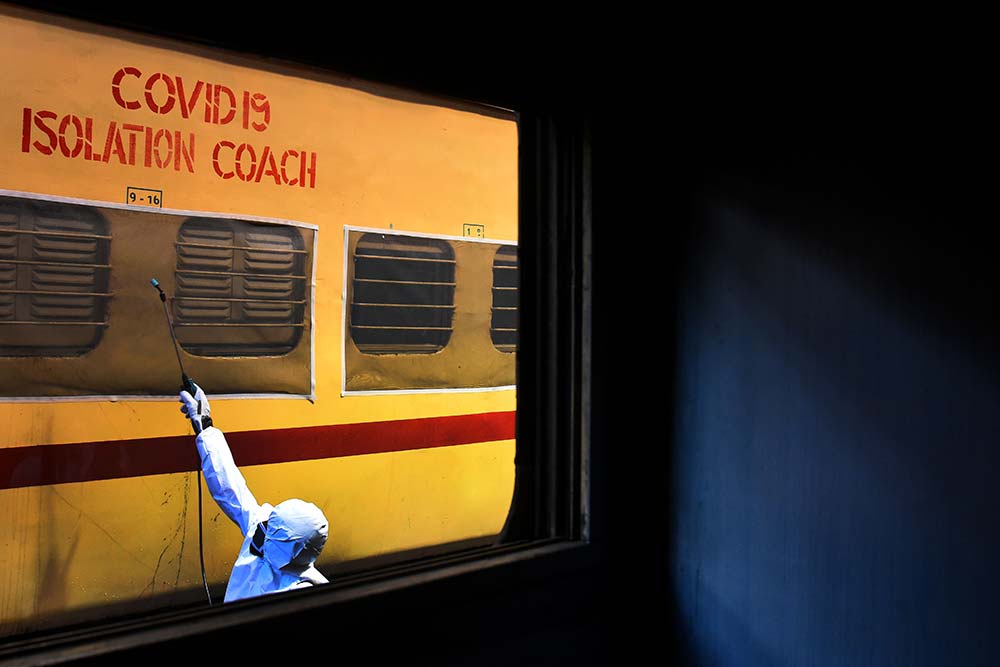 2,500 coaches—of the Indian Railways have been converted into isolation wards. Target is 5,000 such coaches.

But not everyone has the luxury of geographical isolation. Chhattisgarh, for instance, sits in the middle, landlocked between Maharashtra, Madhya Pradesh, Uttar Pradesh, Jharkhand, Odisha, Andhra Pradesh and Telangana. Some of its neighbours have the highest active cases in the country, prompting authorities to identify ‘containment zones’, meaning stricter restrictive measures. Simply put, no one gets out of their homes even for groceries and medicines. Such a step is imperative as the virus, incubating inside its human hosts, is popping up rapidly in the ‘hotspots’ where multiple positive cases were detected. The Indian Council of Medical Research warns that a single infected person—symptomatic or asymptomatic, which are the hidden and more dangerous cases—can infect 406 people in 30 days if that carrier is not quarantined. 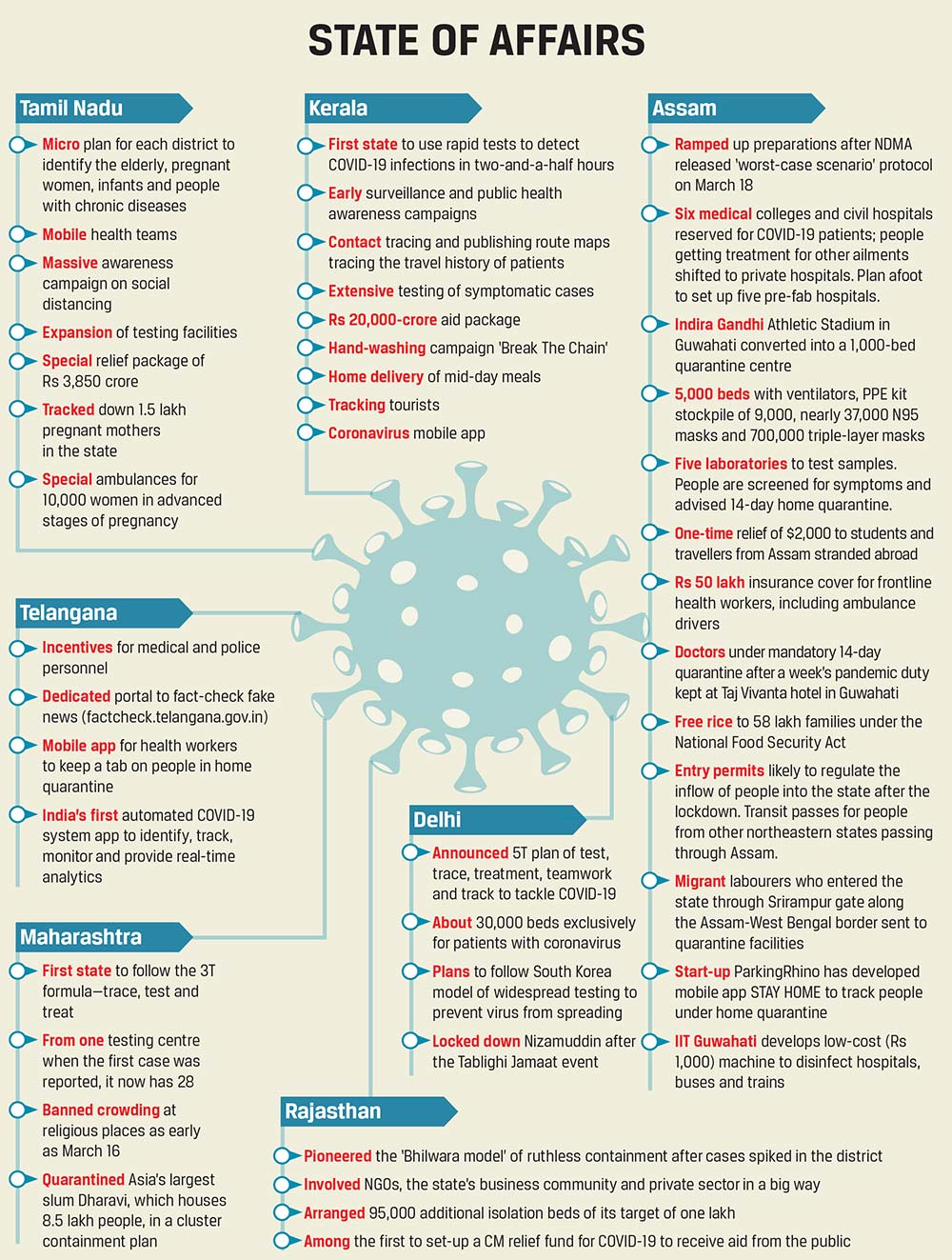 Chhattisgarh CM Bhupesh Baghel knows why ‘stay at home’ is the most effective cure and how reopening interstate traffic will make his people even more susceptible to catching the infection. He imposed Section 144 in Chhattisgarh on March 21 as soon as the state recorded its first positive case. “When cases emerged in neighbouring Maharashtra, we blocked the Great Eastern Road (Mumbai-Calcutta). There was pressure on me to open it, but tough measures were required,” he says. The state has managed to keep the numbers down. But for how long? “There may have been only 10 patients, of whom nine have recovered, but we have 76,000 people in quarantine,” the CM says. The count is likely to shoot up as the state is ramping up tests.

The state also has to keep an eye out on neighbouring Madhya Pradesh, where the virus has touched almost every strata of society—infecting the top brass of the public health department, cops, and killing a doctor, which is a first in the country. Among those getting treated is public health secretary Pallavi Jain Govil. Another dozen patients in Bhopal are police personnel. Indore district has reported the death of Dr Shatrughan Panjwani, a general physician, who was not treating any known COVID-19 case, but his clinic received over 150 patients every day before he fell ill. His death has triggered fears of community transmission. 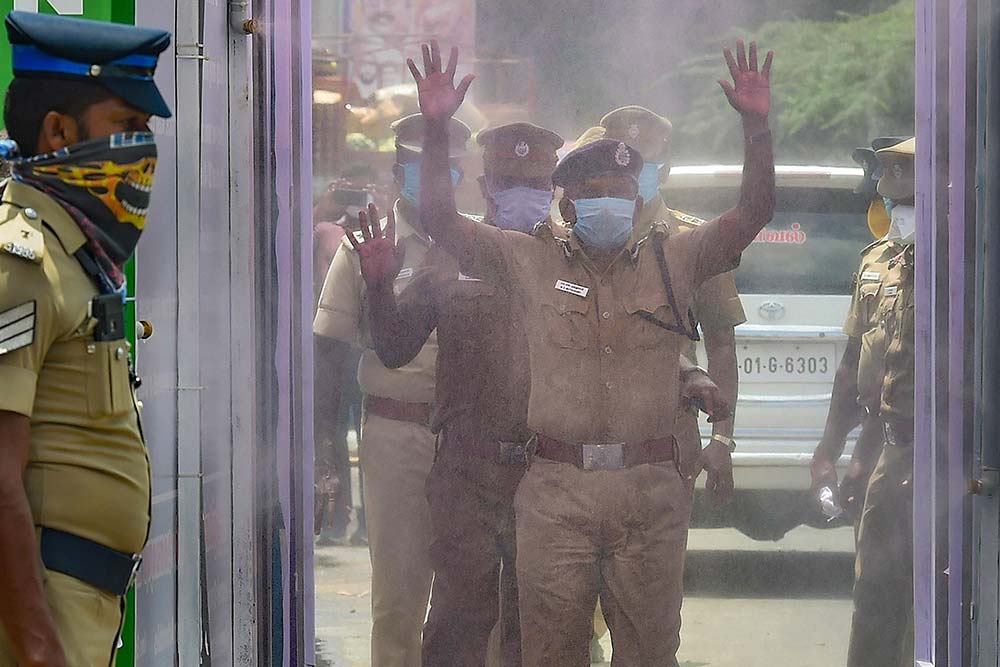 COVID-19 cases are doubling every four days in the country, perhaps because more tests are being conducted. But the number of tests is still inadequate, which means India is effectively fighting the pandemic blind and may not know the true extent of infection for months, if not years. The figure of more than 5,000 confirmed cases and 149 deaths in India (April 8) tell only a fraction of the story because the virus is highly infectious—roughly 2.5 times that of the common cold—but not everyone shows symptoms.

So, most states are playing the blind man’s bluff? Jharkhand, which has reported just four cases, certainly is. CM Hemant Soren admits as much. Since the state is not testing, it doesn’t know which stage it is in. “We have been writing to the Centre since March 21 that we need 75,000 PPEs, ventilators, testing kits, masks and PCR machines. We don’t have enough thermal scanners too. We asked for 300, got only 100 three days ago…If we don’t act now, we will face the consequences in the coming months. In Mumbai, hospitals were shut after doctors got infected. A poor state like us will have to pay a huge price.” What worries Soren more is a possible return of the natives—“about 6-7 lakh migrant labourers”—working in Kerala, Maharashtra, Goa, Telangana etc once the lockdown is lifted. “We are not prepared…financially also we are going to be in distress.” 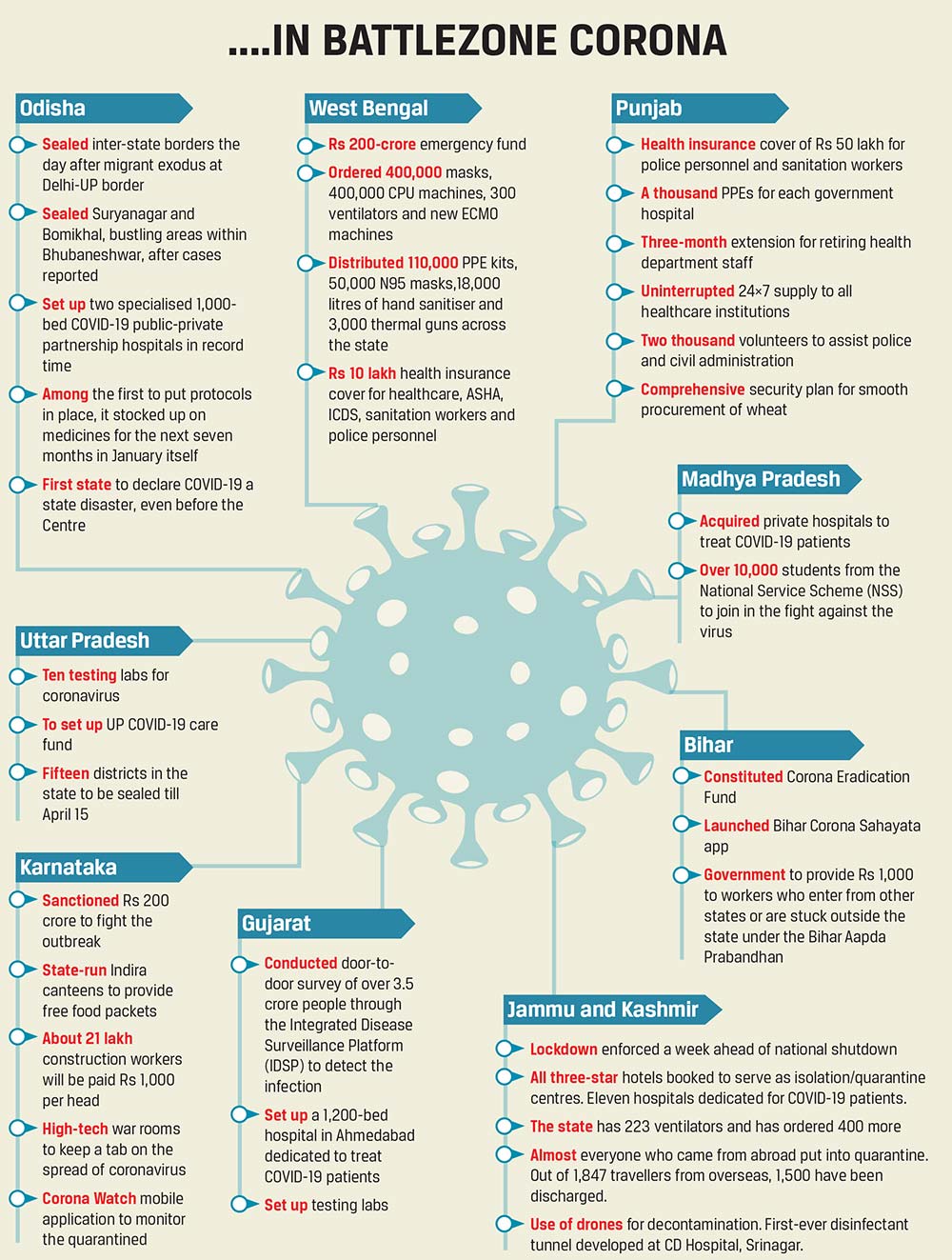 Affluent states are pushing a screening-and-testing approach. Delhi CM Arvind Kejriwal has made tests the mainstay of his 5-T strategy—quite like the South Korean model of widespread tests to identify carriers. Rapid tests will be carried out in hotspots like Nizamuddin and Dilshad Garden, while lab tests will be done simultaneously across the Capital. Delhi has the highest cases after Maharashtra and Tamil Nadu. Test—that’s one T ticked, the rest are Tracing infected people and their contacts, Treatment, Teamwork, and Tracking and monitoring. Kejriwal is confident of treating 30,000 cases based on severity of symptoms in hospitals, hotels, banquet halls and dharamshalas—which have been drafted in to ease the load on the healthcare infrastructure. It’s ad hoc but effective, with a successful track record in the US and Europe. 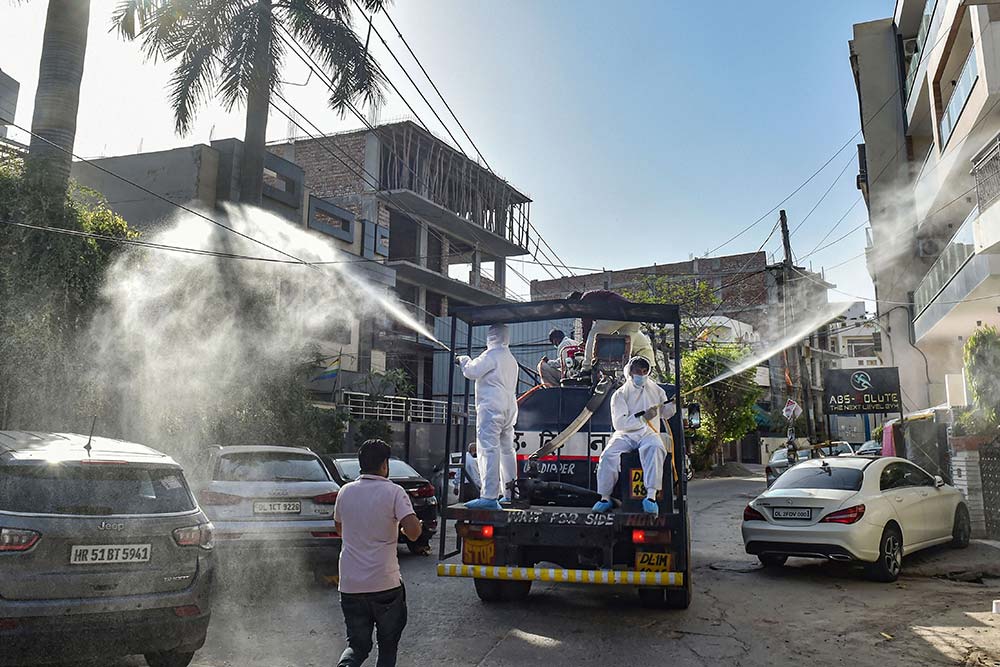 The government in Maharashtra—a state with more than a thousand cases—is not low on confidence either. Minister Nawab Malik says: “We began preventive measures even before the PM’s announcement (of a lockdown for 21 days from March 25). Our figure is rising because we are doing more tests, compared to states like Bihar and Odisha. We have a special cell headed by the chief minister and every arm of the government is in action. We are monitoring and chalking out plans to stem the pandemic.”

Rajasthan is another big state where infections are rising rapidly. It has a “ruthless containment” policy—called unofficially the Bhilwara Model after the entire townsfolk were locked in; food, water and medicines delivered at doorsteps on call. It is modeled on the complete shutdown in Wuhan, the Chinese city where the virus originated. Rajasthan too is confident of winning the war against the unseen enemy. Deputy chief minister Sachin Pilot says the government is fully prepared and has reserved 95,000 additional beds for COVID-19 patients. “There are hotspots like Ramganj near Jaipur, but we are containing it,” he says.

Fighting a contagion that has frustrated the world’s best is no mean task—even Italy’s healthcare system, one of the finest on the planet, struggled amidst mounting bodybags. But lessons learnt from previous epidemics and calamities come in handy. When COVID-19 exploded on China, it drew heavily from its experience gained during the 2002 SARS outbreak. South Korea had data from the 2015 MERS attack to fall back on. The two previous viruses belong to the corona family, whose newborn is the monster currently on the loose. In India, Kerala battled a secretive killer hardly two years ago—the Nipah virus. The state, which takes pride in its robust public healthcare, knew the drill when the new coronavirus landed. The tested protocols—social distancing, isolation et al (new to most countrymen outside the state)—were quickly activated. The result: heartwarming stories like that of Thomas, 93, and wife Mariamma, 88. The couple fully recovered at Kottayam Medical College and went home, winning the battle against a virus striking hard at the elderly. 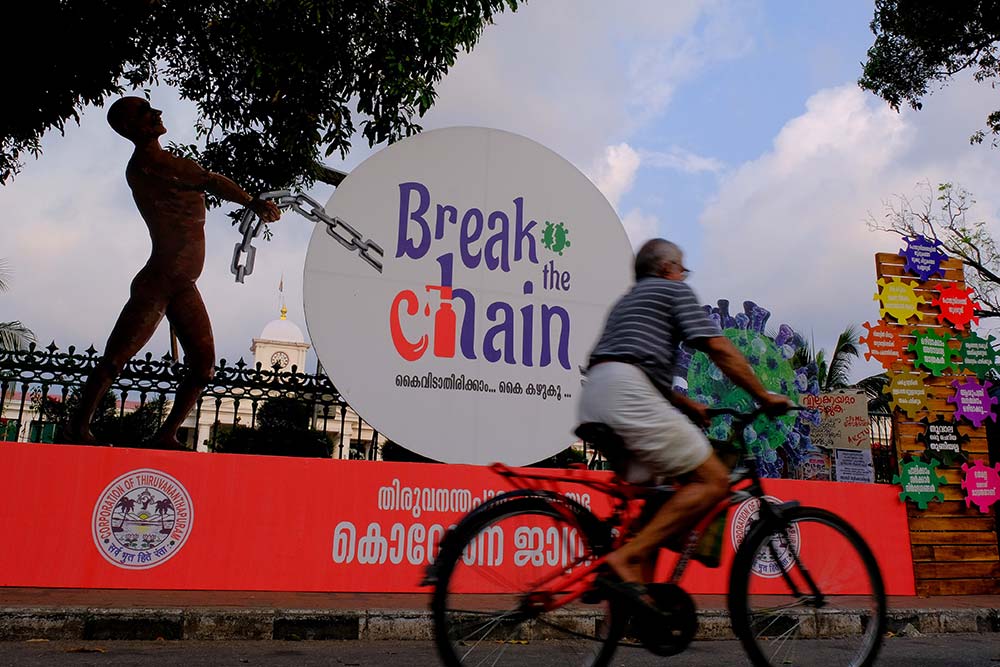 It wasn’t a virus that taught Odisha disaster-management skills, but a cyclone—a super on all scales—that flattened the coastal state in 1999. Drawing from that experience, the administration is mobilising its COVID-19 defences quickly and (so far) efficiently. Like shutting down completely bustling areas in Bhubaneswar, where cases were reported. The government has been proactive despite reports of factionalism at the top tier of the administration. Its case count has been static at 42 for a while, yet areas beyond the state capital have been declared containment zones for surveillance and contact tracing. Besides, there’s food and lodging in 1,948 camps for 65,000 “guest workers”—the state’s non-native workforce.

Show us the money

40,000—India has that many ventilators for treatment of COVID-19 cases. Production has been ramped up
Figure on April 7, 2020

The country is at war, only the theatre is different, as are the soldiers and artillery. But everyone needs money to run the tanks into battle. To buy the war machines—more hospital beds, test kits, ventilators, thermal scanners, N95 masks and coveralls. And to feed the poor and jobless who have either fled the cities or are stuck in shelters. Several states complain that they are left to fend for themselves. Central assistance is hard to come by or is just a trickle. The penny-pinching will hurt Jharkhand, CM Soren portends. He got Rs 284 crore for the State Disaster Risk-Management Fund but his request for “our MNRGEA dues of Rs 600 crore” stays ignored. Maharashtra has made a similar request to the Centre to release Rs 14,000 crore of arrears. West Bengal wants the withdrawal limit for states under the Fiscal Responsibility and Budget Management Act to be raised from 3 per cent of GDP to 5 per cent. Rajasthan is pooling from its tradition of charity. NGOs and Marwari businessmen are funding the war, deputy CM Pilot says.

And until the war is won, if there is one place that can lighten the mood it’s where the fiercest battle of World War II was fought on Indian soil. Imphal. Fun-loving Manipur fights the new enemy with gigs and giggles at its quarantine centres. The art and culture department has ‘enlisted’ prominent singers and artistes, such as comedians of the Nokphade group, to entertain those sequestered from the herd for mandatory isolation till the virus leaves them alone. The performances are from a safe distance, though. A quarantined woman has recovered. A healthy dose of humour is the best medicine, they say—even for a disease that has no cure. That gives hope: the fans will return to Sarusajai, NorthEast United will win the trophy. Party awaited.

(With inputs by Rituparna Kakoty)