From Dust To Ashes

A section of Indian Christian laity is opting to cremate rather than bury their dead, with gradual endorsement from the clergy 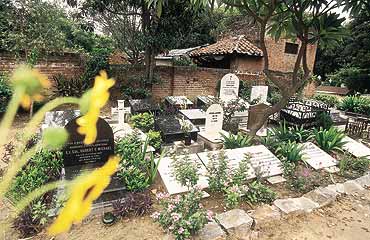 outlookindia.com
-0001-11-30T00:00:00+0553
Ensconced between burial tombs on either side, a cluster of strikingly smaller graves claim space at the heart of Delhi's Prithviraj Road Christian cemetery. Incongruously modest in size, they stand out in the middle of hundreds of larger, older conventional graves that crowd the place. Ask the cemetery's caretaker and he says: "These smaller ones have ashes, not bodies buried in them. Many Christians these days are opting to cremate then inter the ashes of their dead."

And Christianity is accommodating, even blessing, their choice. A choice being made by a small but significant section of the 25-million strong community in India. They feel no less Christian in departing from tradition, and opting for cremation over burial for themselves and their loved ones. Not that such Christians are in the majority, far from it, and yet the grace and tolerance with which their religion is supporting their choice is truly remarkable in these times rife with religious bigotry. To be sure, many community members are entirely unaware that it's permissible at all for Christians to be cremating their dead. But even the more conservative Christian denominations are largely accepting, or at least silently acknowledging peoples' right to personal choice.

"Jesus himself said Sabbath is for Man, Man is not for Sabbath," expounds Father G. Gispert Sauch, professor at the Vidya Jyoti Roman Catholic College of Theology. "Humans aren't subordinate to a preordained sacredness of the world. The world is God's secular creation given to man. Man has made symbols and rituals for himself. Deciding to bury his people while others cremate their dead. It's understandable that man is attached to the rituals he has crafted, he sometimes doesn't want to change tradition, but to change it is not sacrilege."

In concurrence, Reverend Pritam Santram, pastorate-in-charge of Delhi's Cathedral Church of Redemption, likens religion to flora and fauna, dynamic and evolutionary, adapting to the changing world. Shrinking spaces, increase in infectious diseases, changing perception of health and hygiene, rampant migration that makes burials in native places difficult, increasing avarice of land grabbers, encroachers and gravediggers could variously be reasons for preferring cremation over burial in today's world. "The last rites are about reverently disposing of the physical remains of those we love, with hopes and aspirations attached to this life and to life after death," says Rev Santram. "Quite apart from the fact that Abraham and Jesus were buried, burial finds favour with Christians because of the doctrine of resurrection, which requires people to be buried so that they can rise on Judgement Day. But a different understanding of resurrection has many believing God doesn't need bones and body to make the dead rise. Hence, cremation doesn't contradict the dogma of resurrection."

In tandem, Rev Ashish Amos, general secretary of the Indian Society for Promoting Christian Knowledge, says resurrection implies everlasting life of the human spirit. "If the body was so important, then it should have been mummified." Adds the pastor of Bangalore's Richmond Town Methodist Church, Rev C.A. Benjamin: "The issue is not cremation versus burial, but the commitment to Christ. Those who die in Christ will surely rise in Christ."

A belief that will see Delhi resident Eugene Salema, a Roman Catholic, inter the ashes of his mother's cremated body next month. There is some paperwork yet before she can be laid to rest near the remains of his father at the Prithiviraj Road cemetery."My mother expressly ordered she be cremated and I'll honour her wishes," says Salema. "Also, given the space crisis in metros today, I feel more people should go in for cremations."

Another set of practical considerations, meanwhile, have made Mumbai's Dr Zulica Lobo decide on cremation for herself. Burials, she feels, are "problematic" with a host of rituals attached to them: "One month after death someone has to bless the grave, pray over it on All Souls Day, visit it on birthdays and anniversaries. There should be no fuss after death. Burial is expensive, cremation is the easiest way to leave. I haven't communicated my wish to the church yet; it might have some reservations. But if I say it's my last wish I think they will respect it."

Just as Bishop Nimrod Christian, head of the Methodist Conference in the Delhi and Rajasthan regions, had wanted to honour the will of a woman parishioner who wanted to be cremated. A pastor in Baroda at the time, Christian recalls that many in his church objected vociferously when he decided to perform Christian rites over her pyre. Breaking religious tradition, setting unchristian precedents for others to emulate seemed odious to them. It had taken a two-hour-long emergency meeting with the community to convince them otherwise. Recalls Christian: "I kept drumming the same points till they agreed unanimously. First, the dead woman had willed she be cremated, respecting individual choice is important. Second, why lose parishioners to more liberal churches. Third, cremation is theologically justified in Christianity."

The Church of North India, for one, has included cremation among the liturgy in its Book of Worship. The section on Burial of an Adult has prayer instructions for "The Committal of the body to the earth, or to be burned, or to the sea." Rev Karam Masih, Bishop of Delhi for the Church of North India, categorically states his "openness" to cremation. Scarcity of space is not just why: "Christians constitute only 2.5 per cent of the country's population, if space were the only issue, Muslims would have been cremating too. They aren't because Islam doesn't provide for it, for us cremation is a theologically sound practice. There's a possibility of cremation in the very phrase dust to dust, ashes to ashes."

The most ardent votaries of cremation, perhaps, are those with the difficult job of making space for fresh burials in the congested cemeteries of the metros. With area for 10,000 graves, over 1,50,000 dead have already been buried in Mallickbazaar cemetery. Ranajoy Bose of Calcutta's Christian Burial Mission explains how: vaults with members from a family buried in the same grave at different levels. Rev Valentine D'Silva, chairman of the Delhi Cemeteries Committee, speaks of small chambers built against the boundary walls in some of Delhi's cemeteries to accommodate exhumed remains from old graves to enable new burials. Says he: "We've had to close fresh burials in centrally located cemeteries like the one on Prithviraj Road since 1991."

Naturally then, Bose and D'Silva are comfortable when requests to inter cremated remains in smaller graves come their way. "Though such requests are rare," says Bose, "they're becoming somewhat a trend." Rev Franklin Macwana, presbyter of Bangalore's St Mark's Cathedral affiliated to the Church of South India and chairman of the city's Cemetery Committee, agrees: "I come across three to four requests for cremation in a year.It's perfectly all right; the Book of Common Worship, in fact, provides for a prayer for cremation and another for burial." Bose adds to the sanction: "To cremate and then inter the ashes is the most hygienic and space-saving solution, common in the UK and Japan." This as Rev D'Silva finds himself "encouraging" his parishioners on the issue of cremation: "Doctrinally it's not against Christianity. If God can raise progeny from stone, He'll raise the dead from ashes. Only our people are sentimental, they've lived long with the tradition of burial."

Till not very long ago, the Roman Catholic Church forbade cremation. The laws then said that the church "condemns the cremation of bodies...that it is illicit to carry out an order to cremate a body and that contracts and wills ordering cremation are null." The penalty was deprivation of ecclesiastical burial—a burial with rites—unless there were signs of repentance before death.

From apostolic times, Christians had followed the Semitic practice of burial and abstained from cremating their dead, a practice common in the Roman Empire. During the early persecutions, martyrs were often cremated and their ashes scattered in indication of contempt. The catacombs are evidence of the care early Christians took to recover bodies and grant them honourable burial. Under Christian influence, cremation practically ceased in the Roman Empire during the fifth century. The converted pagan tribes of Europe made no opposition to burial either. Cremation, except as rare emergency measure, gradually became almost unknown in Europe for some thousand years.

Till in the late 19th century, cremation saw a revival in Europe. Laws in certain countries recognised it as an acceptable funeral custom; its proponents cited public hygiene and land conservation as motives. In forbidding Catholics to join these Cremation Societies, the Holy Office in 1886 asserted that cremation was unchristian and incompatible with the unbroken custom of Christian burial in the liturgy for the dead. The church's sharp reaction had its roots in the materialistic and anti-Catholic sentiments of European proponents of cremation. They were "Enemies of Christianity" till as late as 1926.

But by the 1960s, some non-Catholic Christians in the US were urging for cremation for entirely different reasons. Burial seemed to them an anti-Christ materialistic denial of death and an overemphasis on the importance of the body. A more Christian attitude towards death, a greater stress on its true spiritual significance was the reason cremation was propagated by them. The Roman Catholic Church repealed its law prohibiting cremation. At present therefore, the Catholic Church "earnestly recommends" burial but "it does not, however, forbid cremation unless it has been chosen for reasons which are contrary to the teachings of Christ."

Traditionalists though still advocate burial. Says Rev Rajinder Masih, president of the Baptist Union of North India: "We're conservative and won't compromise like the other denominations. Tomorrow we too might be compelled to cremate, but not today." Granting that Rome has exempted burial in calamitous circumstances, Fr C. Joseph, judicial vicar of the Syro-Malankara diocese in Thiruvananthapuram, says the Church of Kerala doesn't like to avail or entertain this exemption in normal circumstances. Chennai's Rev G. Dyvarsirvadam, general-secretary of the Synod of the Church of South India, adds: "We're an older church, more orthodox, more recognised.The instances of cremation are far fewer here than in the North." Based in Bangalore's Pentecostal Mission in Jalahalli, pastor Abraham Anurag hasn't heard of Christians burning their dead: "Perhaps, converts insists on cremation."

Burial is the right way to go, explains Rev Isaac Mar Philoxenos, Diocesan Bishop of Mumbai and Delhi of the Mar Thoma Church. "But," he qualifies, "we aren't rigid. The Church doesn't propagate cremation but it doesn't wish to go against times. Today's space cost and ecological problems are to be noted. If a person wants to be cremated, it's only fair that the wish is granted." A truly Christian thought.