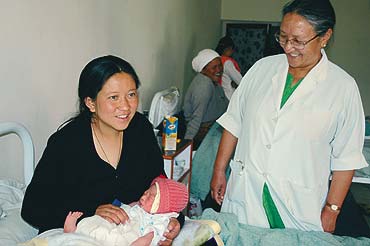 outlookindia.com
-0001-11-30T00:00:00+0553
Few outside Ladakh have heard of Dr Tsering Lhadol. But within the 40,000 sq km expanse of this mountain region, Lhadol is a household name. Held in high esteem by the women she treats and counsels, but increasingly derided by the Buddhist clerics, this 62-year-old gynaecologist has doggedly pursued her mission of improving the health of ordinary women and ensuring they plan their families. For close to 30 years, she was the only gynaecologist in the Ladakh and Kargil districts. So, if today the birth rate here has gone down to 10 per 1,000 persons in a year as against a national average of 26 per 1,000, she can single-handedly claim credit for bringing about this change.

Recognition has come to her post-retirement. She was awarded the Padma Shri this January. Lhadol was also among the 1,000 women shortlisted worldwide last year for the aborted move to award them a collective Nobel Peace Prize. Can just one doctor make such a difference? Though today Leh and Kargil both have four gynaecologists, Lhadol remembers a time not too long ago when she used to hold health and family planning awareness camps in remote areas alone. "It’s a question of mutual trust. I know the family background and circumstances of the women coming to me. Initially, it was tough to convince them and they used to come secretly. But now they hardly have any inhibitions," says Lhadol. Proof of this is the fact that there are hardly any couples in the child- bearing age today who have more than two or three children. Correspondingly, maternal mortality here is nil against a national average of 480 per 10,0000 women. Till about 20 years ago, it was common to find women in Ladakh with seven to eight children. In Zanskar, Nubra or even Shia-dominated Kargil, the doctor’s camps have been a huge success. "It’s a myth that Muslims are averse to family planning," she says.

Ironically, what she pursued with an almost missionary zeal has today put Lhadol in a spot of bother. She is under attack from the powerful Buddhist clergy in Ladakh which is upset with the fall in birthrates. It also fears being outnumbered by the Muslims. But the doctor continues her work undeterred. After retiring from the district hospital Leh, she now works at the Maha Bodhi Karuna Charitable Hospital. She never married and her work, she says, is her life. "I’m like a Buddhist nun who serves society."