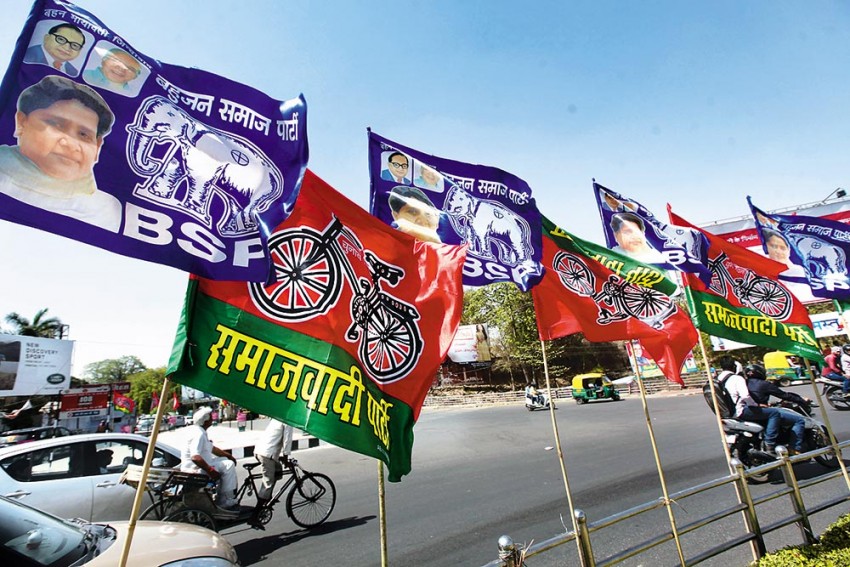 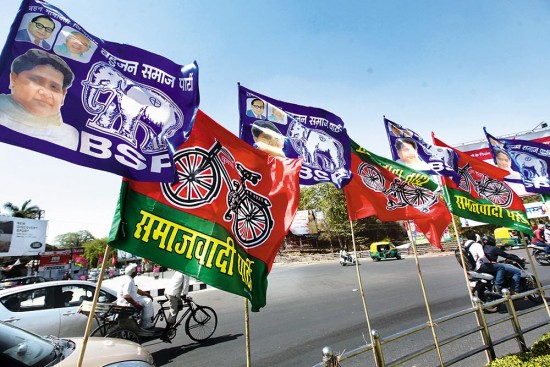 Fresh from conquering the bonsai red fortress of Tripura and bringing down Lenin’s statue, nothing, it seems, can dampen the spirits of a euphoric BJP. Not even the shocker from BSP chief Mayaw­ati, who decided to support the Samaj­wadi Party (SP), a bitter rival for over two decades, in the Gorakhpur and Phulpur Lok Sabha bypolls in UP. The implications go beyond those two seats, of course. The move seems to be a sort of testing the waters, for a new mahagathba­ndhan, which, if it happens, may  upset the saffron party’s 2019 calculations for 2019.

Does the BJP view the prospect of a combined SP-BSP as a threat? Not in its current mood, and not for the half-formed shape the threat is in now. “It’s not even a long-term relationship. At best, it’s an opportunistic flirtation that will fizzle out soon,” says a senior BJP leader. “In a political alliance, there are two things at work: electoral arithmetic and chemistry. In the case of SP-BSP, neither works.” On chemistry, he has a point—relations between the leaders (and cadres) have long been marked by antagonism, and that only reflects the natural tension between the social blocs they represent. But electoral arithmetic? Even if all numbers don’t get added?

Chief Minister Yogi Adityanath doesn’t appear too flustered. He calls it an “unnatural relation”, the coming together of a snake and mongoose during a flood. But bluster apart, Yogi is not taking any chances and is in aggressive campaign mode, addressing public rallies in both constituencies. He personally has a lot at stake. Gorakhpur is home turf, and the bypolls will also be a vote on his one year as chief minister. It’s also a seat Yogi has represented for 20 years in the Lok Sabha. Before him, his guru Mahant Avaidyanath was MP from the seat for a decade. The association is half a century old.

After the 1967 polls, Avaidyanath’s guru Mahant Digvijaynath too had represented it as an Independent candidate. Cumulatively, thus, except for an 18-year period from 1971 to 1989, Gorakhpur has had the chief priest of Gorakhnath Math as its MP for 34 years—and uninterruptedly for three decades now. This is the first time the BJP has fielded a Math outsider from the seat: Amit Shah has zeroed in on Upendra Shukla, an influential Brahmin leader from the area. 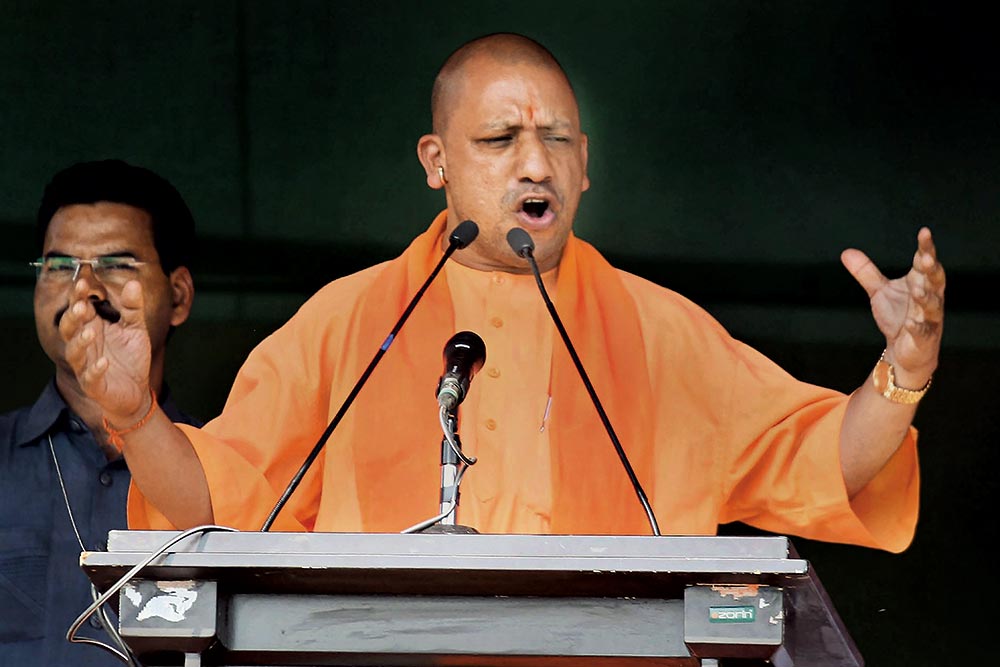 “It’s a prestige issue for Yogi,” explains a state BJP leader. “He even has to overlook the fact that Shukla was put up aga­­inst his will. He had wanted a Math insider to be nomina­ted as he believes an outsider will dilute the political influ­ence of Gorakhnath temple. But adhyakshji (Shah) prevailed. Yogi has to campaign for Shukla who­leheartedly for his own and the party’s reputation. It might also be a good idea to reach out to the Brahmins, the largest savarna group in Gorakhpur and, at 13 per cent of the population, also in the state.”

As compared to the last-minute, ad-hoc attempt by the BSP and the SP to aggregate their votes—an idea whose viability is not self-evident—the BJP has gone about working at its social combinations with near-scientific precision. It was the Bihar defeat of 2015 that spurred the BJP to relook at the caste combinations it needed to strengthen. “The social combination we worked out in Bihar in the face of JDU-RJD-Congress mahagathbandhan went somewhat haywire,” explains a BJP general secretary. “Laloo Prasad Yadav gloated that Kamandal lost to Mandal. But there were a number of factors working there.” The BJP-led NDA had given 23 tickets to Yadavs and 10 to Muslims in Bihar. Of them, only six Yadavs won and none from the min­ority community. “For the UP assembly elections, we corrected our social messaging, focusing on the non-Yadav OBCs that comprise about 25 per cent voters. We also managed to expand our base among non-Jatav Dalits, breaking away half of Mayawati’s committed votebank,” the general secretary explains. The BJP government at the Centre also moved a Bill to grant constitutional status to the OBC Commission.

“The BJP is on solid ground and that’s why we are not really worried about the coming together of the BSP and the SP,” says BJP spokesperson Bizay Sonkar Shastri, a Dalit leader from UP. “Only hunger for power brings them together. It’s plain opportunism. They have nothing in common apart from promoting divisions along caste, creed and religious lines—the kind of politics the people of UP have rejected. That’s why they chose the BJP by a three-fourth majority.”

Shastri rationalises alliances forged by the BJP, saying coalitions are sought only for the betterment of people and development. “The BJP has had to expend much energy to bring the focus of politics—both central and of states—to development, away from caste. It has taken stupendous efforts by PM Narendra Modi and Amit Shah,” he adds.

“Only a partial accrual of BSP votes to the SP is possible,” says Prof Alok Rai. “There’s too much ­conflict between ­workers on the ground.”

Another UP leader sounds a note of caution. He says Gorakhpur may not be a problem, but Phulpur could prove tricky as it’s traditionally not a BJP stronghold. Keshav Maurya, who had to vacate the seat after he became deputy CM, had won it for the first time for the BJP in 2014 with a record margin—“greater than that of Pandit Nehru (who represented the constituency till 1964)”—as he loves to say.

What helps the BJP—and slightly muddies the pitch for SP candidate Nagendra Pratap Singh Patel—is the sudden arrival in the fray of strongman Ateeq Ahmad, SP MP from the seat in 2004-09, as an Independent candidate. The BJP hopes he will split the Muslim votes the SP and the Congress are eyeing. The Congress’s Manish Mishra may, in turn, be a rival claimant to the BJP’s Brahmin votes.

Though Mayawati has urged her supporters to vote for the candidate most capable of defeating the BJP, leaders think not much vote transfer will take place. Prof Alok Rai of Ban­aras Hindu University (BHU) believes only a partial accrual of Dalit votes to the SP is possible, not a wholesale transfer. So it’s not a question of simple addition of voteshares.

“On paper, the BSP-SP entente seems formidable, comm­anding a substantial votebank of Dalits, Yadavs and Musl­ims,” says Rai. “Extrapolation of votes, by the sections both the parties represent, won’t lead to an arithmetical conclusion. There’s too much conflict between voters and workers of the two parties on the ground. Too many forces are at play below the surface of social combinations and permutations. It’s simplistic to believe the complete BSP voteshare will get added to that of the SP to help it exceed that of the BJP.”

Also, the academician points out, so far it’s not really a true alliance between the two and, if they actually do give it a formal shape with proper seat-sharing, it may be a game-changer before 2019. It is these bypoll results that will decide for the BSP and the SP if there’s any political mileage to be derived from coming together.