Freedom On A String

Isn’t it better to paint the sky with kites than to watch marchpasts and listen to boring speeches? 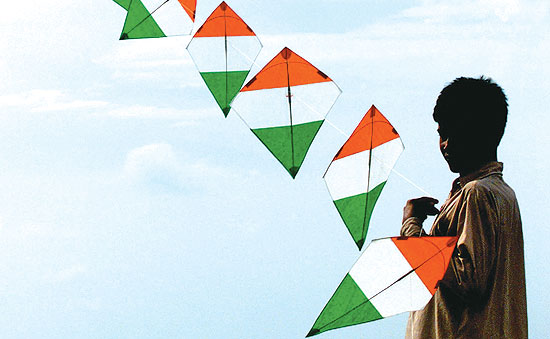 There is almost nothing about rituals of statehood that appeals to me. The speeches leave me cold, and patriotic anthems happen to be the most ponderous form of music ever performed or composed. As for the pomp and circumstance of parades and other solemn but pathetic attempts at grandeur—they only repeat their lessons in how distant the apparatus of the state actually is from the lives of citizens.

Typically, my attention, when flags are raised up poles, is less on the flag and more on the sweat on the brow of the man doing most of the actual hoisting. Because flags, like nations, get stuck in their destinies, and sometimes have to be tugged at vigorously to open and flap about; or let loose their meagre shower of yesterday’s desiccated petals. The palpable anxiety of the hoister (who is worried about what might get written into his confidential report if the string snaps, or the flag stays tied up) and the thinly masked frustration on the visage of the attendant dignitary who wants it all done with as quickly as possible are the two performances I find most moving at these moments. Apart, that is, from the sporadic defecations of ceremonial cavalry horses, caparisoned elephants and aloof camels brought out to lend the parade a touch of biodiversity. Somehow, they ring truer than most other attempts to mark such occasions.

Republic Day, with its pornography of ordnance, enormous waste of public money and tacky tableaux is probably the worst offender, but Independence Day, with its schoolchildren bused out to the Red Fort in Delhi and subjected to security checks at the crack of a humid dawn, doesn’t rank far behind. The children lose a well-earned holiday and the rest of India gets a pious homily from behind bullet-proof glass. Rather than being an occasion for quiet, sober and perhaps personal reflection on what liberty might mean (especially when so many subjects of this republic are denied its substance), Independence Day has become an empty vessel for an increasingly narcissistic commemoration of what it means to simply ‘be’ Indian, as if that were of any real consequence. Meanwhile, the violence that marked Partition, coincident with ‘Independence’, goes unmourned in India, Pakistan and Bangladesh.

But there is something about August 15 that still means a lot to me, and that isn’t about flying flags. It’s about flying kites. August 15, as anyone growing up in north India ought to know, is really all about manjha and pench, about letting loose a full-throated cry of ‘bho-katta’, when an airborne kite snaps from its string in the sky, and the mad run and skirmish for its capture that follows before it hits the earth. It’s about decoding a person’s passions from the colours they choose for their kites, about learning to test the strength of paper and to sense the wind by licking your finger. These, and other elementary lessons in aerodynamics are still reasons to look forward to August 15 each year.

Perhaps it’s a throwback to the boyhood thrill of holding a taut kitestring on the precarious rooftops and bylanes of a ‘refuzee’ colony in west Delhi, head cocked up, eyes locked in a steadfast gaze intent on scanning the clouded sky, tracking distant, tiny but majestic diamonds of colour as the kites danced to the wind. Their flight taught me more about ‘attaining liberty’ and their spiralling descent more about ‘losing it’ than all the civics lessons on the meaning and significance of ‘Independence Day’ ever could.

Anand Bakshi, in his lyrics for the film Kati Patang, did not know he had gifted us with the one of the most pithy ways of thinking about the destiny of nationhood and nationalism. As the song goes, ‘Na koi umang hai, na koi tarang hai (There’s neither a surge, nor a wave)’. Ships of state adrift in still, motionless waters, their flags just about fluttering in a spent tailwind, are to me like so many kati patang; neither surge, nor wave, and certainly no pious ritual, can lift them out of their torpor.

What can one do, in such circumstances, but heed the call of Mary Poppins and her friends, Mr Banks and Bert, and simply, ‘Go fly a kite’?

(The author is an artist and writer with the Raqs Media Collective.)