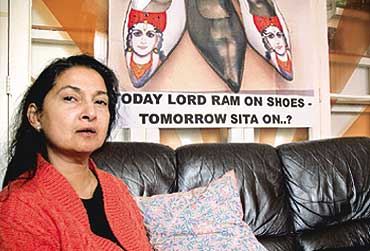 outlookindia.com
-0001-11-30T00:00:00+0553
The god Ram painted over French firm Minnelli's 'designer' shoes is not, of course, the first time Hindu images have been set up as exotic eastern design. But unlike other instances, it's led to protest which in the past few days has begun to pick up steam like no other.

In the past too, Hindu groups scattered across the West have been periodically taking the fight to what they see as abuse of cultural images. People have eased themselves over the figure of Saraswati painted on toilet seats, others have blown their noses into Krishna-marked pocket tissues. Women have been sold panties with Hanuman poised to leap on them, and some of the barest Italian bikinis now offer a range of Hindu gods.

Even shoes are not new. The Californian company, Fortune Dynamic, had launched a range of shoes with Hindu images on them. After a campaign by several Hindu groups across the US, Fortune withdrew the range from the market.

The new campaign is kicking in stronger partly because Minnelli insists it will continue to sell the shoes. They are backing on the French freedom precept—pick the design they like, sell it as they choose. But to Hindus, the design amounts to desecration. "People are very moved, distressed to see their Shri Ram painted on shoes," says Sheila Maharaj of the group Hindu Human Rights (HHR) that is campaigning against Minnelli. "They are supportive of the campaign. We are getting a strong Hindu response from all around the world, even a very strong supportive response from non-Hindus."

A Minnelli executive was abrupt and dismissive when HHR first called them, Maharaj said. Since then, Minnelli staff have refused to take calls or answer messages in the face of a growing "e-mail and telephone bombardment" after HHR published their e-mail address and telephone number on its website. Several Hindu groups now plan to join a protest outside the French embassy in London called by HHR on Sunday (June 12).

The protest is increasingly being directed at the French government too, for failing to pressure the company to withdraw the shoes. The French confrontation with Hindu groups follows its continuing conflict with Muslim, Jewish and Sikh groups over its hugely controversial law banning the wearing of religious symbols in schools. That law, directed at the Muslim hijab for girls, has encompassed the Jewish kippa (cap), the Christian cross and the Sikh turban too, so that it does not appear overtly anti-Islamic.

As Sikh groups protested, a French minister suggested they switch to invisible turbans. No French Sikh could find one of those, but the government had to find another minister after it failed to explain just what an invisible turban is.

Hindu groups have encountered a French bias for far longer. "In France, we find a lot of the writing very anti-Hindu," says Maharaj. "They view it from a European Christian mindset. There is no analysis of Hindu civilisation from the Hindu viewpoint." And while a good deal of the French media opposed the law on religious symbols, there is little support in the French media for the campaign against painting Ram on shoes. Some French journalists who inquired into the controversy said there was nothing wrong with the shoes within the French worldview, and that in the worst possible scenario, the shoes marked just a tacky hippie image.

Minnelli has about 120 outlets across France. In the face of silence from the company, there is little information on how many such shoes were manufactured, and how many sold. They were never likely to find many buyers, but that is not the reason that Hindu groups want those shoes off the shelves, and off the streets of France. They want an apology from the company, and more importantly, an awareness that would mean the group does not keep up with its firefighting on one such product after another.

Most companies that have used Hindu images on products have argued innocence and withdrawn the products. When Ram and Saraswati appeared on swimwear and lingerie from the Italian firm Roberto Cavalli, the daughter of the company owner flew to London to apologise, and promptly ordered their withdrawal (the VHP did not need to carry out its threatened campaign of holding Sonia Gandhi responsible).

A Belgian bus company that had twisted the arms of a Nataraja figure to portray him as a sort of traffic policeman directing passengers to the front of the bus withdrew the image after strong protests from HHR. The books chainstore Borders withdrew its finger puppets showing Hanuman and Kali after the group protested. In the Minnelli case, Hindu groups are encountering what they see as the company's right to offend.

London has become the launchpad of the protest partly because the Hindu population in France is small and scattered. Some French Hindus have been invited to join the protests and take the campaign into their own country.

London-based HHR is a small but particularly energetic group. Bigger Hindu groups in Britain are now falling in behind its campaign. "Use of Hindu symbols in a manner deeply offensive to the community has become a fashionable trend," said Venilal Vaghela, chairman of the influential Brent Hindu Council. "Commercial manufacturers need to understand the sense of hurt Hindus feel by this disrespectful attitude."

To press their case, Hindu groups are evoking imagery around these images too. That Hindus take their shoes before entering a temple. That when Ram was banished, his khadau were placed on the throne as a mark of veneration. "Nowadays, it is a measure of the decline of Hinduism's standing that a French company uses the celestial features of this self-same deity and plasters it over women's fashion shoes to be trodden into the pavements of France's modern metropolises," HHR declares. But Maharaj also sees a bright side. She says there's a "rising awareness of our spiritual and cultural identity, and indignation over abuse of Hindu symbols".