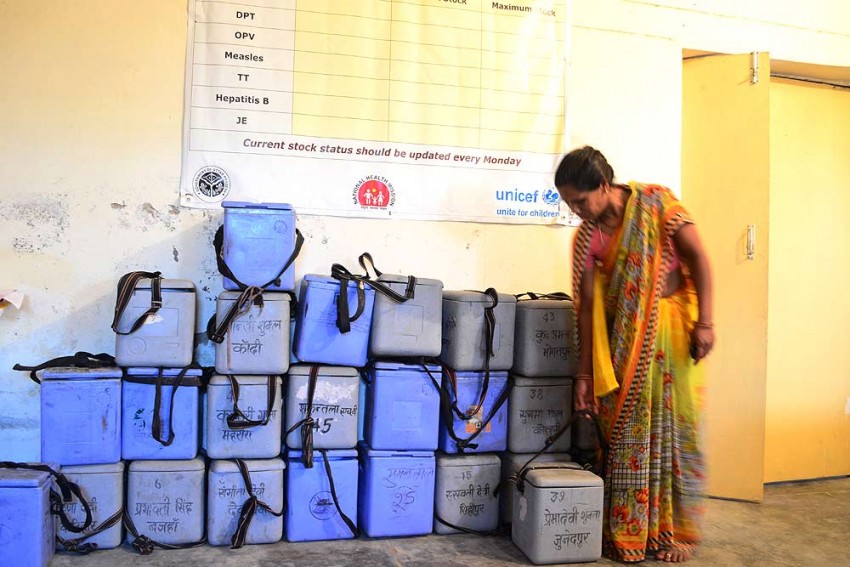 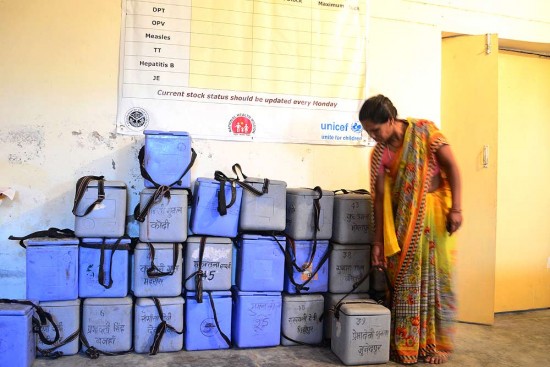 How many vaccines does a newborn need? Does a child need vaccination regardless of how minor the ailment or rare the disease? Even doctors don’t offer a clear answer. More than 85 per cent of the total vaccines sold in India are administered through state-run programmes under the central government’s Universal Immunisation Programme (UIP). Aiming to immunise all newborn children, the programme started off with six essential vaccines and, over the past few years, introduced three more—rotavirus, Pentavalent and pneumococcal vaccines—while the mumps vaccine is in the process of being added. Battling overstretched resources and poor coverage, the programme has also drawn flak for yielding to the influence of international bodies, leading to certain vaccines being introduced that allegedly don’t match the profile of immunisation needs on the ground. For instance, every year, five lakh children die due to vaccine-preventable diseases and another 89 lakh are at risk, because they are either unimmunised or partially immunised.

So is public money being spent for private profit through the welfare-oriented, ‘free’ immunisation programme? “The UIP is funded by taxpayers’ money, so when any vaccine is introduced for mass immunisation, it has to be proved that the disease burden (spread of the disease) and the vaccine’s quality actually call for rolling out a state- or nation-wide programme for it,” says Dr Jacob Puliyel, head of paediatrics at St Stephens Hospital in Delhi and a member of the National Technical Adv­isory Group on Immunisation (NTAGI).

Half of the 40 members of the WHO committee that changed the protocol for adverse effects ­following ­immunisation represented vaccine-manufacturing firms.

As a huge amount of public ­money—Rs 9,451 crore, as per the Indian Council of Medical Research’s projection for 2017—is spent to enable free immunisation, the choice of vaccines involves a balancing act between the cost of the product and its utility in keeping the country free of preventable diseases. Getting a measure of vaccine utility requires wide-ranging studies on disease burden, immunisation efficacy and the vaccine’s adverse effects on individual children as well as its collective impact. It is on the basis of the profile emerging from such studies that the money spent by the government on the vaccine procured through tenders needs to be justified.

The past decade or so has seen a proliferation of new vacci­nes in the market, led by big multinationals seeking to widen their reach in developing countries such as India. This has encouraged a supply-push approach to imm­unisation rather than a demand-driven one. Queering the pitch even more is an opaque tangle of global institutions—decisions on procurement for the UIP happen within an elaborate, complex system controlled by this network. It involves conditions on expenditure attached to ‘soft loans’ from the International Monetary Fund (IMF), approval mechanisms of the World Health Org­anisation (WHO) and recommendations of the Global Alliance for Vaccine and Immunisation (GAVI), which works as a bridge of sorts between global pharma giants that make vaccines and developing countries that procure them.

As things stand, the National Vaccine Policy too is proving to be of little help in this regard. According to a paper published by Y. Madhavi and N. Raghuram in science journal Current, the old policy was amended “in a tearing hurry” by the Union ministry of health and family welfare in 2011 without any consultation with the stakeholders. “[The amended policy is] not designed to enh­ance national public capacities for public immunisation programmes, but to justify spending public money on privately produced vaccines in the name of protection from diseases, whose incidence figures and public health statistics are dubious and industry-manufactured. In its eagerness to push vaccines, this policy completely missed the very idea of selective immunisation and implies that all immunisation is universal,” write Madhavi and Raghuram.

The changed orientation had a direct effect. “There were few studies for establishing disease burden on the ground even though it costs much less to monitor diseases than to develop and produce vaccines,” Madhavi tells Outlook. “Vaccines are recommended by scientists who develop them or companies that make them, but bulk procurement by a sovereign natio­nal government must be guided by disease burden and efficacy, not by estimates and advance market commitments enco­uraged by international agencies. If a disease is prevalent in some other country, it’s assumed India bears a burden as well.”

“Commitments to procure vaccines are often made even before ­clinical trials for ­efficacy are completed by the ­manufacturer,” says Y. Madhavi.

Take the Pentavalent vaccine, for instance. It is a single-­vial combination of vaccines to protect against five diseases—diphtheria, pertussis, tetanus (DPT), hepatitis B and haemophilus influenzae type B (Hib). A quick look at the GAVI website shows it was recommended by the alliance to repl­ace the DPT vaccine and increase the uptake of vaccination against hepatitis B and Hib. Introduced as part of the UIP in 2011, Pentavalent is suspected to have actually killed 276 children so far, most of them in Delhi, Tamil Nadu, Madhya Pradesh and Kerala, according to the health ministry’s reply to an RTI query by Puliyel. A ground report by the Human Rights Law Network (HRLN) revealed a dozen suspected deaths in Delhi, with all the children showing similar symptoms.

“About 24 hours ­after the vaccine was administered, the children are reported to have cried inconsolably in pain, while their abdomen had turned black and blue,” says Prakriti Sar­een, a member of the HRLN team that brought out the report. But, even though, technically, deaths within 72 hours of administering a vaccine are taken to be a result of ‘adverse effects following immunisation’ (AEFI), the government has refused to acknowledge the connection bet­ween the vaccine and the deaths.

Pentavalent came to India pig­gy­backing on GAVI recommendations even though it’s not lic­ensed by the US Food and Drug Adm­ini­stration (FDA). Moreover, according to Puliyel, no rigorous field research was done in India on its effects. When trials in 2008-09 led to the deaths of 14 children in Sri Lanka and 43 in Bhutan, both countries showed Pentavalent the door. That’s when the WHO diluted the protocol used for measuring the AEFI, bes­ides limiting Pentavalent to just two states in India to begin with. The change in protocol, according to the WHO website, was done by a 40-member committee, half of whom represented vaccine-manufacturing companies. It raised suspicion that the interests of Pentavalent’s manufacturer had something to do with the change in the WHO protocol.

Moreover, several studies have shown that India’s disease burden for hepatitis B and Hib—the two diseases that Pentavalent prevents in addition to what the DPT vaccine was already covering—is almost negligible. These include studies conducted by the Sanjay Gandhi Postgraduate Institute of Medical Sciences, Lucknow, and the National Institute of Nut­rition, Hyderabad. According to an editorial in the journal of the Indian Academy of Paediatrics, “The frequency of chronic infection for hepatitis B was similar in both unvaccinated and the vaccinated individuals—about 0.15 per cent—rendering the hepatitis B vaccine completely useless in India. The pap­ers also observed that the immunological and epidemiological outcomes of rolling out Hib are not being monitored as the UIP has no capacity for that function.”

Dr Naveen Thacker, Asia Pacific Paediatric Association president and CSO representative on the GAVI board, denies the vaccine caused the reported deaths. “A vaccine is introduced in the country only after it goes through rigorous examination by the NTAGI committee,” he says. “The studies conduc­ted to investigate deaths related to Pentavalent do not show any causal relationship with the vaccine.” Gagandeep Kang, member of NTAGI and the WHO’s Imm­unisation and Vaccine Implementation Research Advisory Committee, too brushed aside the deaths as “circumstantial” in a recent conference.

India’s dependence on vaccine imports and private players has grown manifold over the past few years due to the shutting down of state-run PSUs in 2008. This is a huge change from the 1984 vaccine policy that had stressed on self-sufficiency and, in fact, enabled exports to other developing countries. The closing down of the PSUs left the UIP at the mercy of imports from foreign firms and gave donor agencies grea­ter control over the choice of vaccines. Today, India procures its vaccines from several private companies, both Indian and foreign, including Bharat Biotech, Serum Institute, Pfizer and GSK. In 2010, two PSUs were revived for vaccine production, but the attempt was half-hearted—their contribution remains a measly 2.4 per cent of the total vaccine base. Worse, the change in the procurement pol­icy in fav­our of new combination vaccines means that even the government won’t purchase vaccines produced by its own PSUs.

The dependence on foreign pharma giants is such that the contracts usually include advance market commitments, which have forced many countries to bend over backwards for generating sufficient demand to meet the supply coming through GAVI. The contracts commit governments to procure a predetermined number of doses of a new vaccine. “In fact, the commitments are often made even bef­ore clinical trials for efficacy are completed by the manufacturer,” says Madhavi. Moreover, the vaccines are supplied at subsidised rates through GAVI only for five years (as per the contractual obligation), after which the full price has to be paid. With only 1.17 per cent of India’s GDP allotted to healthcare, this could turn out to be too big a price to pay.

The distribution channel too is a cause for concern. Acc­ording to the Immunisation Technical Support Unit (ITSU) under the health ministry, at least 25 per cent vaccines go waste—due to gaps in the supply chain and logistics management, they lose their efficacy by the time they are administered. While this is true for most vaccinations, the wastage is higher in the case of the BCG vaccine against tuberculosis (over 50 per cent, according to ITSU). Dr Davinder Gill of Hilleman Laboratories, which works on improving quality and supply chain of vaccines in India, believes that major technological and policy interventions are needed to reduce vaccine wastage. “Apart from an improvement in the infrastructure and handling of such vaccines, the government needs to clearly lay down open-vial policies, which include the protocol on storing the remaining doses of vaccines after a vial is opened,” says Gill.

There is also a need to keep a check on how much money is spent to meet international obligations vis-à-vis vaccines. A thrust on self-sufficiency in vaccine production can only contribute to the government’s focus on ‘Make in India’. Also, if the stated emphasis on targeted del­ivery of subsidies were to be ext­ended to the heavily subsidised UIP, it would demand more accurate data collection on the effects of new vaccines, besides pinpointed governmental interventions to make the programme successful not just on paper, but also on the ground.