There's hope now for Mumbai's 'invisible' workers, who labour in the most trying conditions 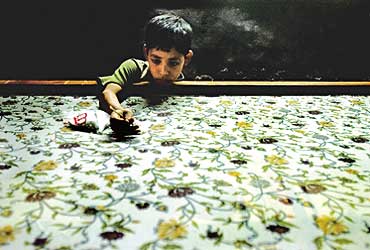 outlookindia.com
-0001-11-30T00:00:00+0553
When child activists from Hyderabad-based MV Foundation went to Sitamarhi, Bihar, last week, they were accosted by scores of parents asking if they had heard about their children. They had sent children as young as six to Mumbai, hoping that they would return rich from the city of dreams. Instead, they haven't heard from their children in years and are now seeing thousands of malnourished, poor and sick children returning home.

"Agents and touts mesmerise parents with stories that their child will have a bright future in Mumbai and take the children away," says MV Foundation's A.V.M. Swamy. They buy the Glittering Bombay dream and pay with their children ending up becoming one of the city's most embarrassing secrets.

Some 70,000 children work almost exclusively in hazardous industries in Mumbai, doing crazy hours, often suffering physical abuse. And while the clothes and jewellery they make with their nimble fingers for trousseaus are omnipresent and their bags could well pass off for their branded counterparts, they are the city's most invisible people. And now they are turning up at neighbourhood railway stations, boarding trains to go home.

A two-month-long crackdown, which ended with a raid releasing more than 450 child labourers in Mumbai's Madanpura area, has brought these children out of cramped, low-ceiling sheds, which formed their sole access to city life. In three raids, the police have released 600 children. More importantly, they seem to have broken the back of unit owners. "Yahaan workshops mein dehshat phail gayi hai (There's panic in workshops here)," says Mansoor Qadri, a child activist. 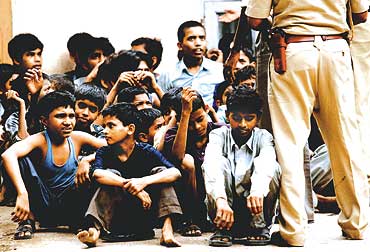 Activists say they have spotted more than 9,000 children taking trains back to Bihar, often accompanied by the workshop owners. Buoyed by this, the Delhi police released 29 children from zari units in the capital. And now, Bihar is suddenly preparing to take back thousands of its children and keep them forever.

This new political and social will is shaking up the landscape of one of India's longest lasting invisible problems and is galvanising other state governments. In Maharashtra, activists have worked for months, negotiating with unit owners to let their child labourers go, set deadlines, and followed up with raids. Authorities take pains to ensure that children are taken in school buses, not police vans, after a raid and are sent back home in special bogeys with police escort. "Now, if you go to an Udupi restaurant, you will hardly see any children working there," says activist Santosh Shinde.

In Bihar, the government and civil society are scrambling to set up a system to track the children and ensure they are resettled. Each child is entrusted to his hometown district magistrate, who hands them over to parents with an understanding that police and ngos will be tracking them to ensure that these children do not slip back into their horrific lives. Going by the condition many of these children are in, and hearing their stories, that should not be hard.

Many children who have reached Bihar suffer from tuberculosis, according to Daisy Narayan, chairperson, Bihar Child Welfare Committee. Children who do steel buffing are vulnerable to TB and asthma while those in zari units have eyesight and back problems due to the long hours hunched over intricate beadwork. But across occupations, these children are malnourished and withdrawn.

Smiling and frail, Aftab insists he is 12, although he looks no more than eight. He says he has been making bags for six years and hasn't been home all these years. Every day he starts work at nine and churns out bags till 1.30 am, with two breaks for small meals. Like most of these children he has rashes on his arms and legs and a wounded knee to show for working in an overcrowded, dark pit for years. All he wants to do now is go home.

Children like Aftab keep the wheels of these businesses running.They work in zari units, leather units, mechanic shops, make bags or do steel buffing, all jobs that require skilled hands.

These children have nimble fingers for intricate work and can be paid nothing, although Aftab thinks he is paid because he gets Rs 40 every Sunday. They are kept in pathetic conditions because children scare easily and cannot protest. All of this survives because the system is so disembodied that only the subcontractors get caught and not the actual buyers who bankroll and run the business.

They dangle the money to subcontractors who get children from their hometowns, even cousins or nephews, with false hopes that they will rise up this chain. Actually, once these children get older, they are merely replaced in the assembly line, with nimbler fingers.

But for that short while, the Bombay Dream seems so exciting in Bihar, Bengal, Orissa, UP, Rajasthan and Nepal. Cartels from different regions operate in different businesses—Bengalis craft jewellery, Bihari and UP children do zari work, Nepalis do leather work and Rajasthani children make pani puris for all of Mumbai.

So, on any given day, touts spin tales about the shimmering Mumbai lights in some small village and pay a couple of thousand rupees to bring 30 to 40 children to the city daily. Now, the city is hitting back to curb this child trafficking.

None of the workshop owners arrested in the raids have been freed. Slowly businesses are beginning to crumble under the pressure. But as long as poverty and lack of opportunities exist, touts will find a way to spin tales of a better life. "Any lasting solution for this will have to be in the source villages," says Farida Lambay, founder trustee of Pratham, a child rights ngo. In Bihar, Narayan of the Child Welfare Committee says that families from the poorest districts in northern Bihar are most vulnerable to trafficking. So, the government has now committed to setting up alternative, residential schools and hostels there and will strengthen employment schemes that will allow families to care for their children. "This situation was forced on us by the raids in Maharashtra but now we want to do whatever we can to keep our children here," Narayan says.

Life at home is a pipe dream for Raju, a 12-year-old bag worker from Nepal. He has earned nothing for three years and when the police freed him, like most others, he had no money. He came here because his family told him what a big and exciting city Mumbai is. But he is going back without seeing anything other than the little windowless shed in which he worked with eight other boys. City life doesn't suit him and all he wants to do now is to "meet my mother."

(The names of children have been changed.)

Weeds In The Lawn