Pakistan's crackdown on militants is nominal, they're still flourishing 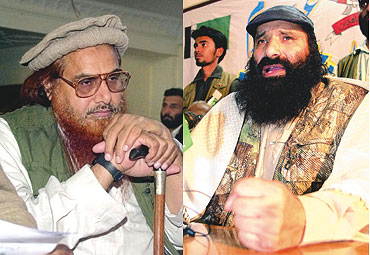 outlookindia.com
-0001-11-30T00:00:00+0553
Let us make three quick assertions at the outset. First, despite President General Pervez Musharraf's claims of having uprooted the terrorist network in Pakistan, most outlawed militant groups and their leaders are back in business under changed identities, operating freely in the country. Second, these militant groups couldn't have achieved such potency without the support of the Pakistani military and intelligence agencies. Third, the Pakistani establishment needs these groups to achieve its strategic goals in the region.

Now, let's look at the promises General Musharraf made post-9/11, and the actions he initiated against militants. He banned six of the nation's top jehadi and sectarian groups in two phases—on January 5, 2002, and November 14, 2003—declaring that no militant or sectarian group would be allowed to indulge in terrorism to further its cause; he placed under house arrest key jehadi leaders who had criticised his U-turn on Afghanistan and Taliban. Under US pressure, and the looming shadow of an Indo-Pak war, Islamabad was forced to check cross-border infiltration into Kashmir.

Let's now examine the situation on the ground. After the initial crackdown, at least four major jehadi groups —Lashkar-e-Toiba, Jaish-e-Mohammad, Harkat-ul-Mujahideen, and Hizbul Mujahideen—have resurfaced and regrouped. The leaders of these groups—Prof Hafiz Mohammad Saeed, Maulana Masood Azhar, Maulana Fazlur Rehman Khalil, and Pir Syed Salahuddin—remain at large. The treatment they received suggests that Musharraf's administration has left open the possibility of using them to wage controlled jehad in Kashmir.

The Pakistan establishment's soft attitude towards the leaders of the banned jehadi organisations can be gauged from the fact that the Hafiz Saeed-led Jamaatul Daawa (JuD) freely held a 25,000-strong meeting at the historic Minar-e-Pakistan Park in Lahore on March 18, 2006. In his address, Saeed criticised India for its 'mischievous' propaganda about infiltration from Pakistan, saying that Delhi had claimed to have ended following up the installation of a fence along the LoC.

A few weeks later, on May 5, 2006, the US State Department branded JuD and its affiliate, Idara Khidmat-e-Khalq, as terrorist organisations. It is well known that JuD is the parent organisation of Lashkar-e-Toiba, though the former denies having spawned it. Inexplicably, General Musharraf has been soft on the JuD, listing it among militant organisations that are merely 'under observation'—and not currently banned.

Last year's devastating earthquake ravaged parts of the Pakistan-administered Kashmir, and also buried the dubious past of militant organisations, particularly JuD's. Despite losing most of its assets in and around the quake's epicentre, the Jamaatul Dawa—the legal name under which the banned LeT operates in Pakistan—provided tremendous relief to the people, earning their gratitude and support. It later launched a campaign to collect relief goods for the quake victims.

JuD activists don't wear uniforms, but everyone knew who the bearded, muscular men with Kalashnikov rifles at the fore of relief and rescue work were. It was only after objections from top US officials about the role of militant groups in quake-hit Kashmir that Pakistan asked them to remove their banners and flags from the relief camps. The US was particularly concerned about JuD.

JuD leader Saeed isn't the sole militant bigwig roaming freely in the country. For instance, on March 26, Hizbul Mujahideen leader Syed Salahuddin was shown on geo TV, addressing an international conference of the Jamaat-e-Islami in Peshawar. In an interview later, he said the one-sided flexibility and pragmatism shown by Pakistan in the ongoing peace dialogue with India has conveyed an impression that Islamabad feels exhausted in extending moral and diplomatic support to the Kashmir cause. "The freedom fighters in Kashmir will continue to wage jehad with the same zeal and zest," he said.

With General Musharraf expressing outrage and sympathy over the Mumbai blasts, officials say the Indo-Pak peace process is still on track. The Pakistani foreign office spokesperson has ruled out the possibility of a Pakistan-based jehadi group's involvement in the Mumbai blasts, adding that Islam is a religion of peace and those claiming to be its proponents could not be expected to be involved in such grisly acts of terror.

Two leading jehadi groups operating in Kashmir have denied any role in the Mumbai bomb blasts. "The Mumbai attacks are inhuman acts. Islam does not permit the killing of innocent people," said Abdullah Ghaznavi, a LeT spokesman. "Blaming the LeT for such acts is an attempt by the Indian security agencies to defame Kashmiri militants." Similarly, Syed Salahuddin's Hizbul Mujahideen denounced the attacks as outrageous, saying the group abhorred the killing of civilians. "Attacks on civilians are not part of our manifesto. We have never carried out such attacks nor will allow anyone to do so," said Hizb spokesman Ehsan Elahi in Islamabad.

However, a retired intelligence official didn't rule out the LeT's involvement in the Mumbai blasts. He thought the train blasts might be an attempt by the Pakistani establishment to pressurise India to make the ongoing Indo-Pak parleys meaningful. The official recalled that the Varanasi blast was claimed by the Lashkar-e-Qahhar (Army of the Vanquisher), which could be just another name for the LeT.

The Pakistan government overtly shares the growing US concern over terrorism. But observers feel that its military and intelligence establishment cannot afford to clamp down on militant organisations, which provide the fighting forces in Kashmir. This is precisely why General Musharraf repeatedly contends that a distinction should be made between terrorists in Afghanistan and the 'freedom fighters' waging jehad in Kashmir. Despite enthusiastic applause from the West for the anti-militancy efforts of Pakistan's 'visionary' military ruler, it is evident that much remains to be done on the ground before these efforts actually bear fruit.