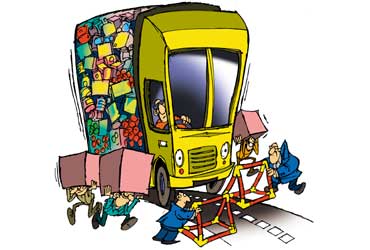 outlookindia.com
-0001-11-30T00:00:00+0553
Talk about doublespeak! Even as commerce minister Murasoli Maran urges Indian industry to compete, he goes and clamps what smells suspiciously like non-tariff barriers on imports of 300 "sensitive items" freed recently. These items can now be imported through only 11 ports, four metro airports and the Tughlaqabad container depot near Delhi. So shell-shocked was most of industry last week that intense lobbying began right after the news broke, forcing the ministry to include eight more entry ports only for edible oil.

What are these 300 items? Broadly, agricultural items and those produced by small industry—meat and poultry, milk and milk fats, fresh and dry fruits, tea, coffee and spices, rice, wheat and other cereals, edible oil and seed, liquor, cigarettes, natural rubber, silk and cotton, marble and tiles, ceramics and glassware, locks, new cars and parts, toys, writing instruments. This is the first salvo of the "war room"—a panel of secretaries—set up by Maran to monitor the import of sensitive items. But if industry can and should compete, ought we protect farmers and small manufacturers?

Says N.R. Lakhanpal, director general of foreign trade: "We've to balance individual or group interests with national interest. We can't allow domestic producers to be decimated because of a few groups. We've to think of the public interest." Yes, but is he aware that at one go, this step will create severe bottlenecks in goods movement, increase prices, raise freight costs and spur smuggling and underinvoicing? "That's propaganda. These are just 300 out of the 10,200-odd items we import. The designated ports carry 80 per cent of our imports, so there'll only be a marginal inconvenience. Yes, the bigger ports are busier but they've the latest infrastructure, so delays will be minimum. And, let's face it, if we had to monitor and get a true picture of the real imports of sensitive items, this was the only way to test the sensitivity in a vast country like ours."

But Ratan Gupta of the Gujarat Chamber of Commerce is inconsolable. "This is like another quake. We're looking at a Rs 2,000-crore loss. Most of our ports and warehouses are rendered useless. One day after the news, edible oil prices rose by Rs 5 a kg. Almost 40 per cent of edible oil is routed through the state and the entire palmolein through Kandla." Gujarat, with 30 ports, can now use only three ports, for edible oil.

And all this to fight an unseen enemy—so far, there are no clear indications whether imports of some of these items have really spurted. cii senior advisor T.K. Bhaumik agrees. "Most of these were zero-import items. Also, nobody knows the extent of their import penetration. I hope it's just a temporary reaction. In our economy, where input-output linkages are so strong, protection of one sector always hurts others."

While the commerce ministry refuses to admit the war-room fiat as a protectionist move, many see in it the politics of business. The growers' lobby is the strongest in the administration. Also, with the Opposition attacking the government for being anti-poor, this move is expected to steal some of their thunder. Says trade expert Bibek Debroy: "The government wants to be perceived as one working to protect the interests of farmers and small industry."

All agree that the sensitive items (barring edible oil) are insignificant to our import basket. cii had listed 800 items, imports of which came to Rs 1 crore each. According to commerce ministry sources, the import value of these items, barring edible oil, would be around Rs 500 crore.That's not even a fraction of our imports last fiscal, expected to be over Rs 2 lakh crore. As such, says Debroy, "the point-of-entry restrictions are a non-issue". But Lakhanpal says if imports of any item crosses 3 per cent of the value of local production, the importing country can trigger the wto safeguards and restrict inflow in the national interest.

Although Bhaumik doubts the wto-compatibility of the move, ministry sources are confident. They argue that others like the EU have also resorted to such restrictions to protect domestic producers. But complaints from the US and the EU, or even Australia, the source of most processed foods imports for India, can't be ruled out. India is already embroiled in an auto parts dispute with the US. But even if queries are raised by exporting countries, India can easily buy time up to two years to change its decision. Monitoring and restrictions, especially in the post-QR era, then, are here to stay. Can this move succeed in protecting farmers and ssis? The former should benefit if things get messy and imports become costlier, as world food prices are cheaper. But farmers not getting fair return has more to do with lack of agricultural reforms than imports. Agro-processed items are not only costlier but enjoy very little penetration so far. As for ssis, most of them are dead and gone, and the latest budget has dereserved most of their turf.

And what of consumers? As usual, they get the rough end of the stick. While a large-scale price rise may not happen, inconvenience for the urban consumer isn't ruled out. Also, as Bhaumik argues: "Our import growth is now lower than gdp growth, while till the '80s, we had a gdp-import growth ratio of 1:1.5. China managed 10 per cent growth only because of its import growth rate of 18 per cent. Instead of boosting imports, fuelling demand and creating confidence, the government is sending wrong signals. All this could have been done by just strengthening the dgft and customs."

Instead, the government has filled the war room with a cluster of babus, for whom the end of QRs is a threat. But not representatives of private trade and industry and consumer bodies, whose real business this should be and for whom a whole new world of opportunities has opened up.