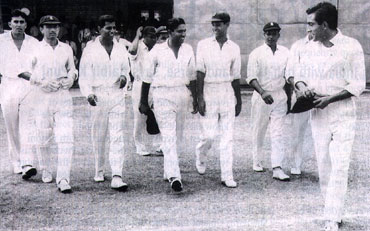 The first time Mansur Ali Khan Pataudi captained a team in India—the Board President's XI against England in 1961-62 he did something that went against the grain of how India played its cricket, and which had only been done once in the 69 Tests India had played till then; he declared in the third innings and gave England an achievable target to win, so as to have a chance of winning himself. England duly won; but Pataudi had gone for broke, and that mattered.

Through the 1950s and into the 60s, India had been defensive in their approach to the game, playing safe, unimaginative cricket, aiming always to avoid defeat, treating a draw as victory. Newly emerged from a colonial past, a sense of inferiority still seemed to linger. Then, tragedy conspired with circumstance to bring about an event which, in hindsight was a seminal one for Indian cricket. The tragedy a near-fatal blow to the head of Indian captain Nari Contractor during India's 1961-62 tour to the West Indies. Circumstance Pataudi, who was being groomed for future leadership, happened to be his vice-captain on that tour. Seminal event India had its youngest-ever, and arguably finest-ever, captain.

His early Tests in charge were cautious encounters he was still finding his feet as a leader. He showed streaks of aggression though; in his eighth Test as captain, against England in Kanpur in 1964, he won the toss and put England into bat, drawing a collective gasp from everybody present only thrice before in over 30 years of Test cricket had an Indian captain opted to field on winning the toss. The match was drawn; Pataudi had the courage, but not the new-ball bowlers to make it work.

Known to be highly intelligent and analytical, and a good reader—of books and men, some would say—Pataudi was quick to do a SWOT analysis of Indian cricket. Prominent in the first column was Spin. India had no pacers to speak of, but a bunch of fine young spinners coming, some of whom would answer to names like Bishan, Pras, Chandra and Venkat. Spin would win India matches, reasoned Pataudi; not ask defensive stock-bowling option, but as attacking force, aimed not at containment beat taking wickets.

Erapalli Prasanna talks in his autobiography One More Over, of how Pataudi nurtured his spinners, gave them self-confidence, an always encouraged them to think batsmen Out helping them formulate strategies to every man, like a chess player marshalling his resources.

Those resources included the fielders. Before his time, Indians considered fielding a chore, to be endured and not enjoyed. It was never thought of as potentially match win Ring, perhaps because India wasn't looking to win matches. But Pataudi was.

Not only did India's outfielding improve drastically under him, so did the close-in fielding. Pataudi realised early on that close-infielders were an essential adjunct to his spin-bowling attack. Great spinners need good fielders close in, to catch those edges, and to bring that element of doubt —or fear —into batsmen's minds. By the time his reign at the top was over, he had built up the world's best close-in cordon, consisting of men like Eknath Solkar, Abid Ali, Ajit Wadekar and S Venkataraghavan.

A brilliant cover-fielder, Pataudi fed from the front. His batting set up India's first win under him, against Australia in Bombay in 1964—he top-scored with A 86 in the first innings and made 53 at a crucial stage of the Purchase in 'the second. His batting resembled his captaincy—unwaveringly aggressive, yet, calculated. He shocked the Bombay crowd by constantly lofting balls into the empty outfield; not since CK Nayudu's times had that been seen there, as intervening generations considered Vijay Merchant's orthodoxy a more sensible ideal to aspire to. Pataudi always counter-attacked when pushed into a corner, and played many critical innings in crises, especially memorable being his 75 and 85 against Australia on a Melbourne green-top in 1967-68, made after a hamstring 7 ill strain, with 'one good eye and one good leg', as eulogisers love to exclaim.

Pataudi won India its first overseas Test series victory, against New Zealand in 1968. Apart from this, his record as a captain was statistically ordinary; but his contribution to Indian cricket is unquantifiable, and priceless. His desire to win, like a genetic strain, engulfs us all today As does the fact that we can.