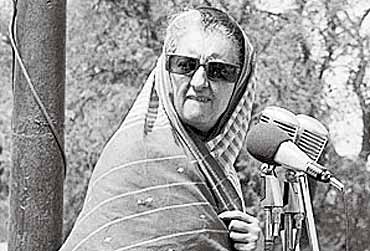 In The Name Of Democracy
By Bipan Chandra
Penguin India Rs 350; Pages: 374
The usual spate of articles on the Emergency that appear in newspapers on June 25 were missing this year. After almost 30 years, have the crises thrown up by the Jayaprakash movement of 1974 and Indira Gandhi’s Emergency of 1975 faded from our memories? An eminent historian like Professor Bipan Chandra thinks so. According to him, people feel closer to the events of 1947, 1962 and 1971. And even though the massive popular movements which started in Bihar and spread into large parts of north India and its traumatic aftermath were "potentially fascist", neither have left "an abiding legacy".

Chandra accepts that his reconstruction of events is largely based on "careful reasoning" in the absence of adequate direct historical material. Mrs Gandhi’s private papers are not in the public domain while JP’s papers consist mostly of his articles and speeches, which do not provide any special insights into what went on behind the scenes. Access to such records would have provided a clearer picture about the source of important allegations regarding "subterranean foreign influences" and/or the penetration of the RSS in JP’s movement.

We are now very familiar with the incumbency factor. It happened after 1971 with Indira Gandhi except that the author describes these as the ‘Years of Disillusionment’. Slogans of Garibi Hatao, radical economic reforms (not of the current vintage!) like bank nationalisation, fera, mrtp Commission and the 24th constitutional amendment did not sustain the regime for long. In 1973, the economic downturn began and the Congress lost election after election. The steep rise in oil prices in October 1973 sent the Indian economic managers into a tailspin. There were food riots in several cities. A series of bandhs, gheraos and demonstrations, which often turned violent, culminated in the railway strike of May 1974. And thus, the die was cast.

It started in Gujarat with the Navnirman Yuvak Samiti demanding a moral reconstruction of society but soon political parties entered the fray seeking resignation of the government and dissolution of the assembly. After many brave words, Mrs Gandhi capitulated by eventually dissolving the assembly and calling for fresh elections. In his analysis of the Gujarat movement, Chandra sees it as an essentially "urban middle class agitation...which later undermined the economic programmes of the agitation...and directed it to political ends".

The genesis of the student movement in Bihar was not only inspired by Gujarat but began in December 1973 with the same objectives: protesting inflation, college fees, cinema tickets and corruption in society. The Bihar Chhatra Sangharsh Samiti led by the redoubtable Laloo Prasad Yadav spearheaded the agitation with violent clashes with the police, leading to lathicharges and firing. In April 1974, JP agreed to take over the leadership of the movement and converted it into a political campaign "to save democracy". By September 1974, JP admitted that "the exigencies of the struggle dictated that resignation of the Bihar ministry and dissolution of the State Legislative Assembly have become its immediate goals". Despite JP’s personal charisma, the movement began to lose its elan and by the end of 1974 was deemed "a spent force". Drawing upon the study of Ghanshyam Shah, Chandra concludes the "movement was not broad-based...the Jan Sangh and the ABVP came to occupy a dominant position".

Indira Gandhi was in no mind to give in to what she now believed as a movement "aimed (at) the Central government and me". In fact, she began to see the battle as an extension of her struggle against the Congress’ old guard. There was perhaps some truth in this apparently megalomaniac perception as attempts to arrange informal negotiations between her and JP came to nought. "Jayaprakash has always resented me being prime minister," she confided to Pupul Jayakar. Not to be outdone, JP remarked, "Does she think she can ignore me? I have seen her in frocks."

Anyway, Justice Jagmohan Sinha of the Allahabad High Court settled the issue and declared Indira Gandhi’s election invalid. She retaliated by choosing to exercise an option that was "the deepest cut" to Indian democracy. Chandra thinks she should have called for elections rather than take the authoritarian route.

There are several significant questions Chandra raises. If authoritarian elements like the RSS infiltrate a popular protest movement, does it alter its basic character? If leaders with a popular mandate allow this to happen ostensibly to protect democracy, is it opportunism? Are extra-constitutional means justified if there is a perception of authoritarianism? Does the social base of a movement that seeks to reform society determine its legitimacy? The fact that the Emergency was replaced by the Janata experiment in 1977, which in turn failed and brought Indira Gandhi back in power, is itself enough food for thought.