The state's in denial; everyone else knows the truth about Binayak Sen 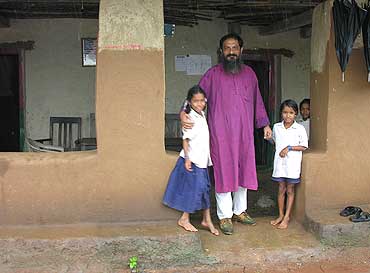 "Dr Binayak Sen is certainly a doctor but a big zero in terms of actual practice of medicine."
—Official chargesheet

The greatest price for Dr Binayak Sen's incarceration on the trumped-up charge of being a Naxalite collaborator is being paid by people who this chargesheet says do not exist at all—his patients. "In the search of his house, no material related to a doctor's clinic was found, there were no medicines," says the almost childishly crude chargesheet. But it's all there, a two-hour drive from the state capital, Raipur, in a village called Bhagram Nala. The clinic, the medicines, the testing equipment, the trained health workers, the medical records of patients who flocked here from a staggering 248 villages. And a community health programme that transformed the lives of its beneficiaries—protecting them, for example, against falciparum malaria, one of the deadliest diseases in this region—but is now tragically running itself into the ground because the doctor who gave it life is watching the days slip by in a barrack crammed with convicted prisoners in Raipur Central Jail.

In normal times, it would be self-evident that the "big zero" flagrantly scrawled across Sen's three decades of medical service to rural communities was a big lie. The fact that one of the country's best medical colleges, Sen's alma mater, Christian Medical College, Vellore, went out on a limb to support him through his ordeal—raising funds for his legal defence, launching signature campaigns, despatching books to him in prison, networking internationally on his behalf—should have nailed the lie. But it didn't. It was the accusation of being a courier for Naxalites that seemed to win the day, despite the flimsy evidence for it, as Sen's bail plea travelled through the legal system, and got rejected all the way from sessions court to Supreme Court (which dismissed it with a single sentence.)

So, gradually and painfully, it has become clear, to a largely apolitical tribe of doctors who revere Sen as a role model, that these are not normal times. Especially not in the context of Chhattisgarh, where the claim of fighting the 'war' against Naxalites provides the police and intelligence apparatus wide cover for chilling human rights violations. These range from fake encounter deaths and the displacing of tens of thousands of tribals by the state-sponsored militia, Salwa Judum, to jailing professionals like Sen—who stuck out their necks and insisted on accountability—with the help of a draconian state law.

What has further dismayed the doctors is that Sen's strong, continuing involvement with the world of medicine has not come across vividly, over the past year, whether to judges hearing his bail applications or to a wider public. That it is, rather, the wild charges against him that have set the parameters for discussion, whether for those attacking him or for those defending him. That for all that has been written about him, few know the sheer number of hours he spent on medical work in Bhagram Nala and the Shaheed Hospital in Dalli Rajhara, the extent to which his wide network of patients depended on him, the level to which state health programmes have benefited from his creativity and wisdom. (Bizarrely, even as he is being demonised by the state police, ably assisted by a local media fed on police leaks, his ngo Rupantar, which played a seminal role in designing the state's Mitanin, or village health worker programme, is still getting government funds for training such workers.)

Most importantly, most people are only dimly aware, if at all, of the cost to the community of denying him bail and keeping him in jail, while the case against him is heard at a cripplingly—indeed criminally—slow pace, with only 6 out 85 prosecution witnesses examined in a so-called fast track court. Celebrated human rights lawyer Nandita Haksar, who has just taken charge of the campaign to free him on the request of several overworked doctors, eloquently drives home the point many of Sen's peers make: "Binayak's primary persona is of a doctor, he came to human rights as a doctor. Not allowing him to treat people, to practice his medicine—his requests to do so, even in jail, have been turned down—is a form of torture, and a disservice to the community."

Shocked that a year has slipped by with Sen still in jail, a newly-formed group, Doctors in Defence of Dr Binayak Sen, has finally decided to tell his story with the rigour it deserves. As part of this effort, doctors belonging to the Jan Swasthya Sansthan (JSS), a rural medical centre near Bilaspur (largely alumni of cmc, aiims and other prestigious medical institutions across the country) are scrutinising years of data to piece together what it really means to keep a doctor like him in jail. The full picture will come out in a report called "When does a doctor become a threat to the security of his country?" to be released at the end of his month—but even the glimpses made available to Outlook say a great deal.

Between 2004 and 2006, 54 patients were seen, on average, every week at Sen's Bhagram Nala clinic. In 2007, thanks to Sen being whisked away to jail mid-year, the figure plummeted to 9. Apart from treating acutely ill patients (those suffering from diarrhoea and malaria, for example), the clinic was providing care to 569 patients with chronic and long-standing diseases, including hypertension, asthma, TB, diabetes, heart disease and kidney disease. The most telling figure is Sen's success rate in controlling malaria through the community programme he ran—the date shows a fall of 80 per cent in the number of malaria episodes over seven years.

"It is remarkable," says Dr Yogesh Jain of JSS, "this is way beyond what we have achieved, which is not even 50 per cent. In the context of the National Anti-Malaria Programme, it is an unimaginable success rate." Today, as the doctors describe it, Sen's health workers, struggling to carry on his work, despite their limited capacity to do so, are devastated; his patients bewildered. "Why are all the people he looked after being punished?" asks Dr Anurag Bhargava. Says A.V. Ramani, a fellow cmc alumni: "When you set up base in a rural area it's because you have a certain faith in the system. How do rural doctors retain that faith, after what has happened to Binayak Sen?"

Gathered together in a living room in Bilaspur on the eve of the first anniversary of his incarceration, Sen's fellow doctors also spoke poignantly about a man who has for the last year been painted either in the lurid colours of a "Naxali dakiya" or in the monochrome tones of a victim of human rights oppression. They remembered the Binayak who shocked city-bred medical interns by briskly wiping up the mess left by a sick patient; the Binayak who grew a beard after the Babri Masjid demolition to understand what it felt like to be a Muslim—and rather enjoyed being called Maulanaji by strangers; Binayak the foodie, Binayak the enthusiastic singer of Brahmo hymns.... Inevitably, however, all their anecdotes, their laughter and their memories ended in a single question: when will his ordeal end?