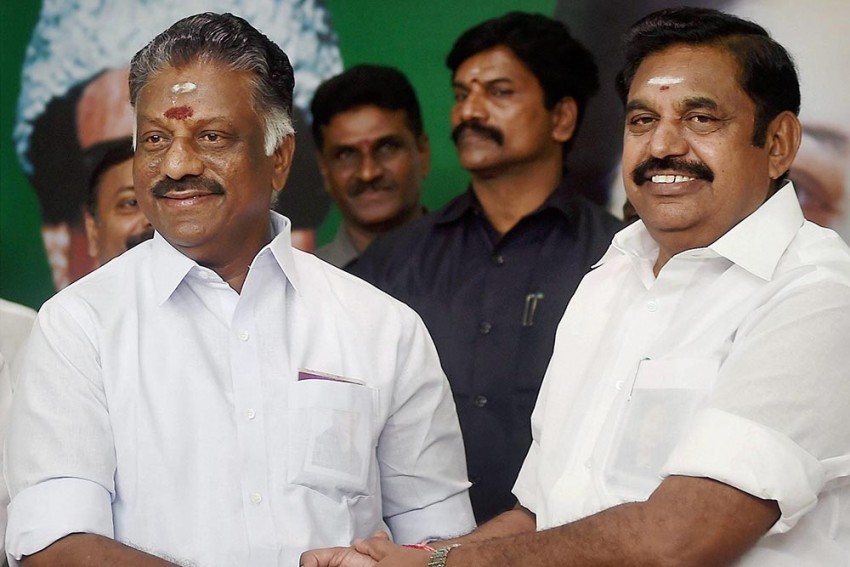 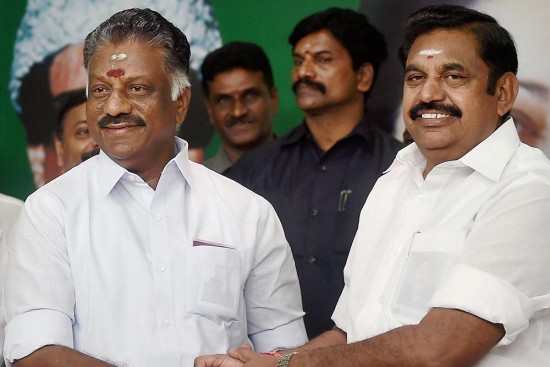 For the sheer twists and turns it can script, Tamil Nadu politics can beat even the trickiest ghat road. Such has been the dramatics after the death of AIADMK supremo J. Jayalalitha in early December last year that the state saw two chief ministers changing, a CM-­elect being sent to jail and a byelection cancelled after  two factions of the ruling party fought for an election symbol that had got frozen.

So, after many false starts and angry words, the August 21 merger of the two AIADMK factions had the appearance of the final act of restoring peace in the embattled party of Amma. Till one more twist kicked in, as 19 MLAs owing allegiance to T.T.V. Dhinakaran, the party’s ‘deposed’ deputy general secretary, with-drew support to chief minister Edappadi K. Palanisami (EPS), reducing his government to a tottering minority.

“Poor EPS could not even celebrate the merger. Neither could OPS (erstwhile rival O. Panneerselvam), his comeback to the cabinet,” observes Ramu Mani­vannan, professor of politics in the University of Madras. “Instead, they were plotting to keep their flock of MLAs safe from a marauding Dhinakaran who was hell-bent on unseating the two proxies (EPS and OPS). The merger, rather than consolidate EPS’s position, has badly undermined him.” As political uncertainty gripped the state again, Tamil Nadu’s acting governor Vidyasagar Rao found himself playing the referee once more. Earlier, in February, he was accused of favouring the OPS camp, first by delaying V.K. Sasikala’s swearing-in—till the Supreme Court verdict arrived and sent the one-time Amma aide packing to the Bangalore jail in a disproportionate assets case. The Raj Bhavan again sat on the EPS claim to form a government—it was only when OPS could not shore up his numbers beyond 12 MLAs that the governor chose to invite EPS.

Thus, on August 21, Rao flew in to Chennai in a jiffy to swear in OPS and one more minister from his faction—and even got the CM and his deputy to shake hands. But the euphoria was short-lived. The very next day, the governor was confronted by 19 MLAs of the Dhinakaran camp who sought the removal of EPS as the CM. As Rao grappled with a constitutional crisis and EPS was exploring ways to save his government, Dhinakaran had his 19 MLAs safely tucked away in a holiday resort in Puducherry.

“If only the merger had happened we would not have minded OPS getting back into the ministry,” says legislator Thanga Thamilselvan, a staunch lieutenant of Dhinakaran. “But it really got our goat when they announced that Sasikala would be removed as general secretary. That is when we decided to pull the rug. Even now we would want the government to continue, but under a new CM.” 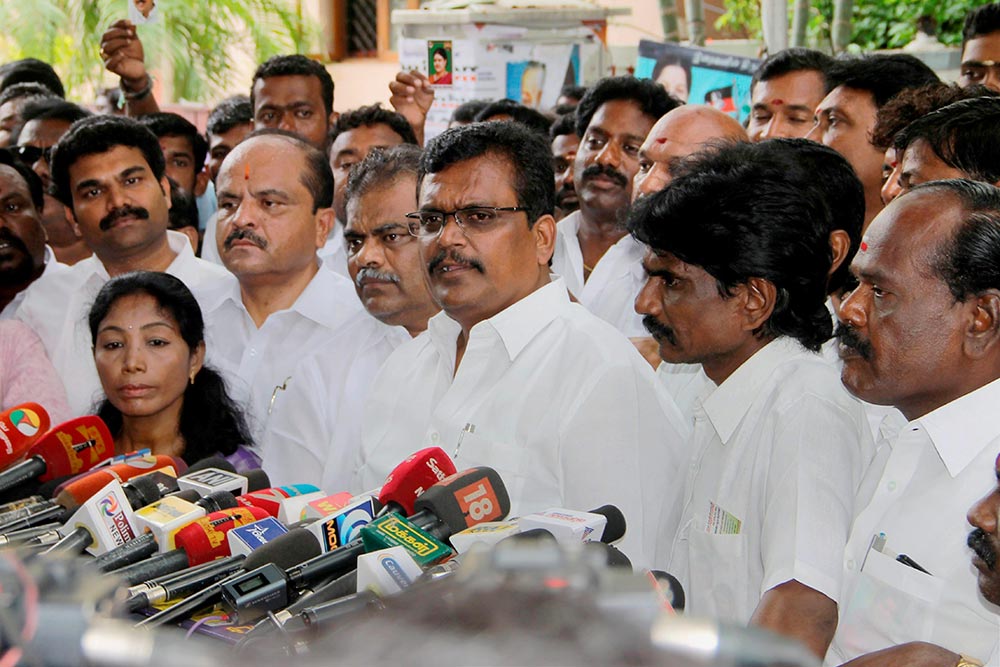 MLAs with TTV address the media after meeting the governor

The Dhinakaran group has already sounded out assembly Speaker P. Dhanapal as a possible replacement for EPS. Their calculation: since the AIADMK has 31 Dalit MLAs, they would rally behind Dhanapal, who belongs to the Arunthdhiyar sub-sect among Dalits, one of the most backward communities in the state. That would also give second thoughts to the DMK about toppling a government headed by a Dalit. “The Sasikala family has been betrayed by a Thevar (OPS) and now a Gounder (EPS)—the two backing communities of the AIADMK, notes political commentator Ravindran Durasamy. “So they are placing their bets on a Dalit, hoping he would be more subservient. Ultimately, the family wants to be in control of the 1972-founded party, which has been their oxygen for survival and expansion of their business interests.”

Dhinakaran has also grown in confide­nce after his successful August 14 rally at Melur. His ability to network with party functionaries has seen him reach out to those sections that felt left out under the EPS dispensation. No wonder, he warned that “sleeper cells” in the EPS camp would be activated to destabilise the government if the Sasikala family continued to be targeted. State intelligence has also cautioned EPS that at least ten ministers are ready to switch sides.

Dhinakaran, sources say, is not averse to taking the help of the DMK and Congress (98 MLAs in total) to topple the EPS government—and then have AIADMK legislators regroup under him.

According to sources, Dhinakaran is not even averse to taking the help of the DMK and Congress (with 98 MLAs) to topple the EPS government and then have the AIADMK legislators regroup under his leadership. He wants to pre-empt both EPS and OPS before they convene the party general council to unseat Sasikala and approach the Election Commission to retrieve the AIADMK’s frozen Two Leaves symbol.

Ultimately everything hinges on the governor’s decision. According to sour­ces close to Raj Bhavan, Rao expects the leadership change of the AIADMK’s legislature party to happen at the party forum and not through the governor’s office. This would mean that Dhinakar­an’s MLAs will have to write to the party’s whip (with the EPS group), seeking a meeting of the legislature party.

If this attempt fails, they could app­roach the Supreme Court to direct the governor to convene the assembly for a floor test. “Six months have passed since EPS took a floor test; so one more floor test is technically feasible now,” points out a former advocate general. “Also, the situation has changed after some MLAs withdrew support to EPS. So the governor has to take cognisance of these circumstances to convene the assembly at the earliest for the floor test.” 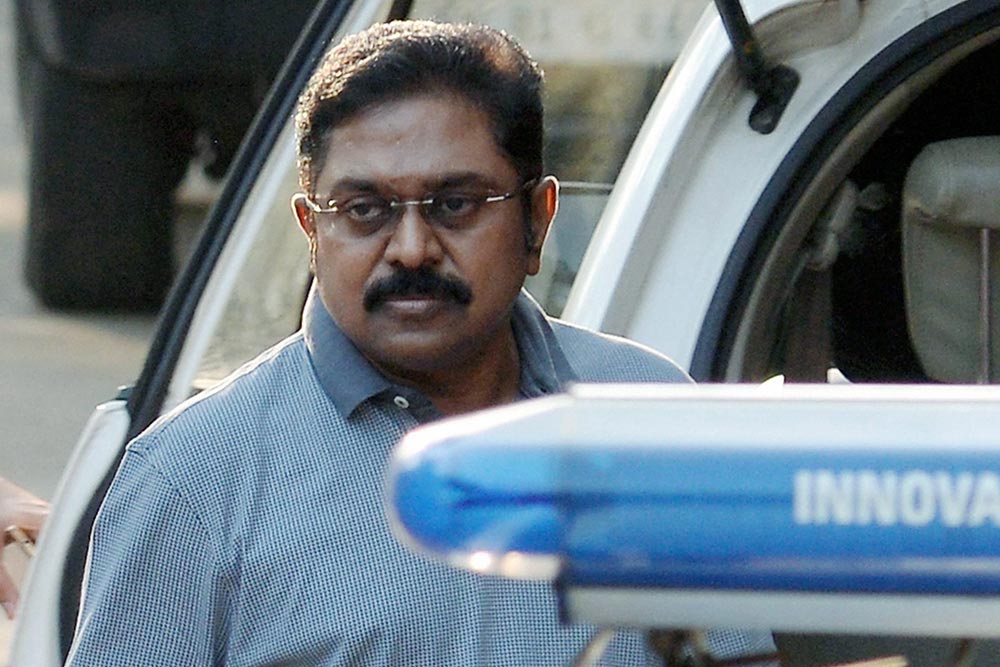 Dhinakaran’s googly has flummoxed the BJP, which blessed the merger and even played an active role in it. The party was hoping that the EPS government would stumble its way till 2019 so that Tamil Nadu can have simultaneous elections for the assembly and the Lok Sabha. That would give time for superstar Rajinikanth to float his party and build up momentum. But the present crisis could lead to an early election by 2018, which would be advantageous only for the DMK and Congress.

“It appears we have to rework our calculations if the EPS government does not last till 2019,” shrugs a state BJP leader. “One option would be a spell of President’s rule while keeping the asse­mbly in suspended animation so that the AIADMK factions can arrive at some kind of accord. We backed the merger of the two factions hoping that it would bring greater stability to the state. But Dhinakaran wants to protect his family’s turf which has led to the present crisis.”

The Opposition DMK is least convinced that the BJP (ruling at the Centre) is interested in the state’s welfare. “Why have they not appointed a full-fledged governor in over a year? It wants a weak government functioning under a cloud of uncertainty, so that Delhi can conti­nue to call the shots,” says DMK spokesperson K. S. Radhakrishnan. “Look how the state government was tricked into accepting NEET for medical admissions. The Centre promised to back a state ordinance giving exemption from NEET for a year, but later told the Supreme Court that it was against the ordinance.”

The coming weeks will see a battle between the survival skills of EPS and the staying power of OPS, pitched against the manipulative moves of the Sasikala family, especially Dhinakaran. More pol­itical churn can only leave Tamil Nadu with a bad tummy.

A Latter-Day Torch To Be Borne With Care