The Congress has finally shaken hands with the TRS. Worried, Naidu? Updates 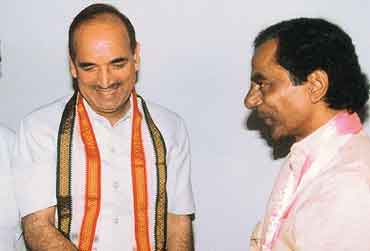 outlookindia.com
-0001-11-30T00:00:00+0553
The warning was loud and clear. The rumble of firecrackers could be heard at NTR Bhawan—the Telugu Desam Party headquarters—as jubilant Telangana Rashtra Samiti (TRS) cadre celebrated, a kilometre down the road, in front of their leader K. Chandrashekhar Rao's residence. The long anticipated Congress-TRS alliance had finally been forged. For supporters of the homeland demand, it was time to celebrate. For Chandrababu Naidu, it was a signal that the fight was getting that much tougher.

The sound of the crackers had barely died down and the chief minister was already issuing statements dubbing the alliance "a panic reaction of a frustrated Congress". Despite the brave words, the TDP's own reactions reveal just how seriously it views the new threat. Naidu held several meetings through the day to first monitor the formation of the alliance and then plan strategies to counter it.

Of the 107 assembly seats in Telangana, the TDP had won 52 seats last time. The BJP had cornered seven. As for Lok Sabha seats, the region accounts for 16, of which the TDP won eight and the BJP three. So writing off Telangana is not as simple as the TDP would have us believe.

The details are yet to be spelt out but TRS sources claim it has an assurance of 42 of the 107 assembly seats and 6 parliamentary ones. "With this our victory is assured. The Opposition alliance will get 250 out of the 294 seats," said Ghulam Nabi Azad, the aicc's observer in-charge of Andhra Pradesh.

The Congress is hoping the alliance will sweep Telangana and boost its chances of ousting the TDP. In fact, the Congress was so desperate to keep the TRS on board that many of its leaders feel the party has been shortchanged by a fledgling sub-regional party which is yet to prove its vote-winning capabilities. "The choice was simple. Either we gave in to them or faced the prospect of spending another five years out of power, which frankly means the end of the road for the Congress in Andhra," says a former Congress MP.

The TDP is already strategising on how it can capitalise on the brewing dissent in the Congress—bound to get louder as more and more ticket aspirants find themselves out in the cold because of the TRS alliance. The Congress has a reasonably strong presence across telangana, with 41 of its 91 representatives in the last assembly coming from this region. The TRS, on the other hand, has a real presence in only four districts of north central Telangana but will be contesting from all ten districts in the region hoping to improve its tally. The CPI(M) and CPI are also pushing hard for their share of seats. "Individual sacrifices will have to be made because the losses far outweigh the gains. I think voters will now realise that we are going to sweep Telangana and this will help create a positive wave for the Congress in the other regions too," says Ponnala Lakshmaiah, a former Congress mla from Telangana.

Naidu, however, is hoping it turns out differently. "The alliance has brightened the TDP's prospects because people of all three regions will give a strong verdict for a unified Andhra," Naidu said. The TDP has traditionally opposed the idea of carving up Andhra Pradesh. It even managed to keep its poll ally, the BJP—one of the earliest advocates of creating a separate Telangana—quiet on the issue ever since the two tied up in 1999. This cost the party dearly in the last election but Naidu has left the BJP with little choice but to continue with this internally unpopular policy.

The Congress, despite its alliance with the TRS, continues to remain ambiguous on the issue of actually dividing the state. It is afraid of alienating voters in the other regions and playing into Naidu's hands. "When we come to power at the Centre and the state, we will fulfill the expectations of the people of the region.We will try and attend to the Telangana issue as well as some backward pockets in Rayalseema and costal Andhra," Azad said at the press conference, carefully picking his words, trying to keep everyone happy.

The Congress believes with the new alliance it now has the best chance possible to prevent Naidu from scoring a hat-trick and extending his run as AP's longest serving chief minister. Naidu, on the other hand, has a reputation of being a master-strategist. Now is a time when his skills will be put to real test.