Autumn is a desirable season in sexuality. Mature trysts with love and lust, turning passivity into passion, and dating after divorce are the new colours of the fall. 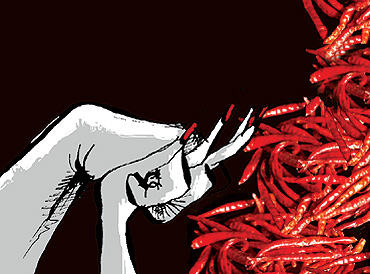 outlookindia.com
-0001-11-30T00:00:00+0553
There is supposedly a paradise on earth where mature men and women make languorous love all night long on silken couches, drinking champagne, their energies never flagging as they experience one orgasm after another. The quest for this Eden is futile since it exists only in the reports and minds of sex scientists. These reports are always utopian, in that all respondents have sex regularly and are fully satisfied in their marriage and relationships, much like Sting and his wife Trudi, who recently discussed on television how they can make love for up to eight hours at a time by practising Tantric sex. The truth is that for most normal people in their 50s, that's how long it takes to get the job done—once.

There's an obvious disconnect between perception and reality. So, on this trip to Goa for the New Year, I asked a few friends (all above 40 and counting) how their sex lives were shaping up. The results of my survey: 20 per cent of my respondents just looked away in disgust, saying, "You? Not again!"; 20 per cent said, "Mind your own business"; another 20 per cent smirked, "It depends with whom...", and the remaining 40 per cent said, "What's sex?"

Sexual ennui sets in rapidly—statistically, after seven years of marriage or two children, which ever comes first. Sex after 40, especially in a marriage, is like a game of Russian roulette—you may get lucky, but the dice are loaded against you. So, lust gets replaced by comfort and companionship, but more importantly by freedom. "I am not looking for sex, but rather a separate bedroom," says Sunita, 54, a housewife. "You don't have to put up with the snoring, can read well into the night, or watch television. It's a little haven of your own and I think I have earned it."

It's this complete disinterest in things sexual among women that arouses the ire of men in their 40s, who believe their best times are yet to come. Their constant refrain is that their needs are seldom met and that by rejecting sex, women are rejecting affection and love. Women, on the other hand, say this constant talk about sex is merely that—talk—and men would be hard put to put up a decent show, if called upon to perform! Physiology too contributes to the rapid dwindle. Sexual arousal tends to flag with age. "Sex at 60 has much to do with luck and circumstance," candidly admits Vinod, 54, who claims to have had more than his share of luck. So, despite the best intentions, senior moments happen and one is almost always let down by the body. 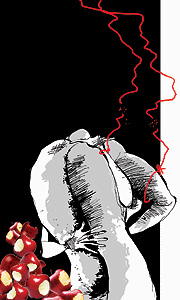 But before you slip into deeper depression—the sex pundits may not be wrong, after all. For one, bodies of both men and women never completely lose their capacity to feel and give pleasure and hormones never completely dry up. Moreover, changing social circumstances have helped redefine life dramatically in India. Forty today is not middle age, not remotely, as 60 has become the new 40. Looking good and keeping fit have become important, especially since wrinkles that show up beneath the balding head, sagging breasts, cellulite and paunches are no lust launchers. So, better awareness, diets, gyms, cosmetologists, the taut bodies of friends that you envy, all force you to remain fit...an attractive body being able to continue to kindle the fires at home for that much longer. "The competition out there is fierce," admits Vikram, 38, from Jodhpur, whose wife Tina is an extremely attractive and svelte mother of two. "I have to make the effort to keep the sparks flying, otherwise, man, who knows these days!"

The changing economy has affected the entire dreamscape of a nation, irrevocably changing its consumption patterns. In an attitudinal sea change, India today brims with ambition, as men with disposable incomes, especially those from small towns, make their way to a new upper class. More money in hand means more down time. At the New Year party in Goa, a group of forty-somethings from Hyderabad and Nagpur who were more than willing to talk about their sex lives said the best moments were on vacation. "There are no children, no responsibilities, everyone's relaxed and having fun. I never say no on a holiday," giggles Sanjana, mother of two teenagers, who was obviously having a great time. The men agree: "We now take two holidays a year, it's been that great." The rest join in the chorus.

Sex after 40 is now seen as another of a host of new experiences available. Commonly viewed as burgeoning promiscuity brought on by years of sexual repression, it is in many cases a manifestation of an emerging new social identity that is pushing the envelope in exploring all available options. A certain amount of over-40 sexual happiness also comes from the increasing number of men and women ending old relationships and seeking new ones. Divorce is no longer the issue it used to be and once the decree is through, people are even encouraged by their families to seek social contact, all of which definitely leads to a second wind sexually.

Vandana was married at 21, had two kids by 24 and was divorced at 45. With the children grown up, Vandana says, she started "dating"—still a quaint word to use in India. "Suddenly there were interesting men out there, people I had never looked at. It was untenable to think that at my age, I could even consider being in a sexual relationship again. Yet sex has never been so good; I am ecstatic that I have been given a second chance."

For men too, life is looking up. With the growing numbers of unattached women, finding a younger woman to share your life and bed with is wildly exciting. "Women today are very sophisticated, both in their approach and needs. This can be initially intimidating for a man, especially the second time around. But once you overcome fears of rejection, it's a wild ride," says Gaurav, 41, divorced and not looking for remarriage.

India is on the brink of a sexual revolution with attitudinal changes in private that have yet to gain public acceptability. There's stunned silence in the room as Debasish faces his family, the impact of what he has just said taking its time to sink in. Debasish has just announced his plans to get married. Nothing particularly dramatic, except that Debasish is 63, a grandfather and father of three children, all in their 30s. "I have been a widower for 12 years, raised my children alone and got them married," he says. "Two years ago, I met a widowed lady and suddenly all the long-buried emotions came to the fore. Love and companionship are basic needs, whatever one's age. Thinking relationships are only about sex is insulting, to say the least. The children may not like it, but I have the right to live my life just as much as they do." Certainly the children baulked at first, embarrassed and mortified, but soon accepted the truth of what their father was saying.

Debasish is not alone; this is India@60 where new definitions are being forged and fresh lines are being drawn after centuries of living within prescribed parameters. Romance, senior style, is rapidly becoming a reality, if not an acceptable part of life. Life is for living, is the new mantra...and if there is a dollop of sex added to it, believe me, no one's complaining.