Mamata once believed in democracy. Time she rediscovered it. 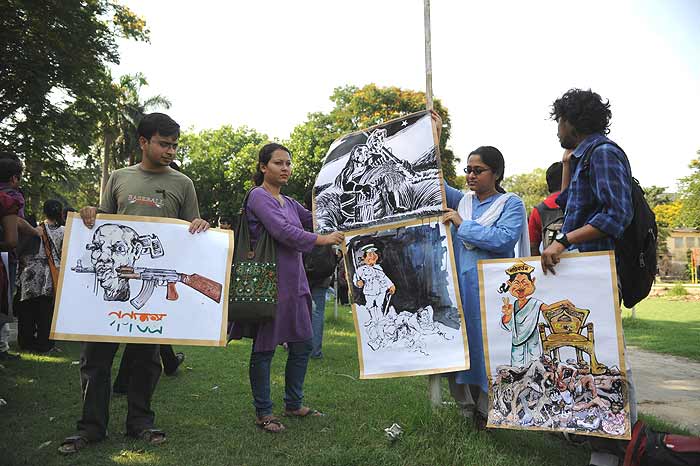 I'm sure similar things have happened in history, but this is happening in the year 2012, in our city, Calcutta, where we otherwise show a lot of forbearance. And this is something that has seldom happened in India. First of all, that little thing at the heart of the controversy, it is not even a cartoon. It is an act of humour. A little piece of art. Popular art. You see such things regularly on the back of autorickshaws, buses, trucks. If you go to Bangladesh, you will see lots of them. In other states of India you will see them. Bhagat Singh with some Bombay matinee idol. It’s not that they are insulting Bhagat Singh or that there is some sort of innuendo. It’s just that people enjoy a piece of artful, apocryphal absurdity within the basic framework of reality. And it takes imagination to concoct such a thing.

Look at me. I faced it too. The moment I earned a little fame way back in 1992 and after a few people started to follow me as a songwriter, singer and musician, various cartoons made their inevitable appearance. Really well-known Bengali newspapers carried these cartoons. One pro-CPI(M) Bengali daily regularly printed cartoons of yours faithfully. And very vindictive ones too, those that belittled me. But it was, after all, a cartoon. In a world full of injustice that makes daily demands on our sense of outrage, it wouldn’t do to lose one’s shirt over such a thing. Where is our sense of humour? Why can’t we laugh at ourselves?

Mamata’s various paranoid acts read like a script. And all for domination. the same authoritarianism against which we were fighting.

What is more dangerous and therefore transcends the realm of humour is that professor Ambikesh Mahapatra was not arrested at first, soon after it was discovered he had forwarded the ‘offensive’ cartoon. People entered his housing estate and beat him up, and he was forced to write a ‘confession’. Only then was he arrested, along with a retired engineer, Subrata Sengupta. The police arrested not the miscreants who bashed the professor up (they’ve done it now), but the affronted duo at their mercy.

And consider this: there was not a single abusive word in that cartoon. So the mock-outraged reaction of the government, and that of the two cabinet ministers of West Bengal, who proclaimed that whatever the police had done was right, is totally unacceptable.

This, along with other acts of hauteur, like the case of the blacklisted newspapers and the banning of Marx in textbooks, reads like a script. And for what? For domination. The same authoritarianism against which we were fighting. Mamata Banerjee had been fighting a valiant war. And no doubt that she really sought the downfall of the CPI(M). And she always proclaimed her allegiance to democracy and freedom of speech. We became friends. We joined hands. And we started to fight shoulder to shoulder.

But that was a different Mamata. That was a Mamata with whom I could communicate. Who would give you a patient hearing sometimes. Though I saw even then that she was very impatient. Almost like me. And she also has something artistic about her. She is quite a good painter. I have observed Mamata closely; we have been very close, and both of us showed a lot of respect for each other. It’s not that I want her to vacate the chief minister’s post, like some people who are clamouring for her departure. But she should mend her ways.

I will now reveal something that I seldom speak of. She literally coaxed and cajoled me for over a year to agree to become a Trinamool Congress candidate in the 2009 Lok Sabha polls. She said every booth in my constituency (Jadavpur, in Calcutta) would be manned by the CRPF. If it is manned by the crpf it’s one thing; if it’s manned by the home guards, under the CPI(M), it is quite another. Time and again she promised me, “Don’t worry, Kabirda, you will have crpf personnel in every booth.” But no, not a single crpf man was assigned to my constituency. Maybe they wanted to see me defeated. I won the Jadavpur seat without any help. I still wonder why Mamata was so insistent on my joining up. Just to show the world that she had Kabir Suman, the well-known musician, activist, journalist, in her entourage?

As told to Dola Mitra