Did the Congress shoot itself in the foot with the Art 356 move? Updates 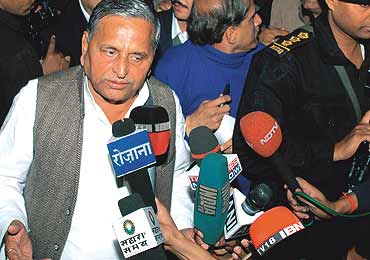 Earlier, the Congress leadership seemed in favour of 'vacating' its aggression. For, the decision seemed to involve sacrificing the relative stability of the UPA at the Centre for uncertain electoral gains in UP. Only, since the Congress had raised the pitch so much and even party chief Sonia Gandhi had played a key "advocacy" role, serious damage control was warranted if the UPA was not to lose face.

Invoking the much-hated Article 356 had exposed the schism within the UPA—with the Left unitedly crying foul—and also dredged up a latent unease in its equation with Rashtrapati Bhavan. President A.P.J. Abdul Kalam, who had burnt his fingers once with Bihar, was reportedly none too enthused this time. The Congress also risked tarnishing its image by showing it was willing, even if temporarily, to make common cause with the BJP to go after Mulayam. After all, as the Left was against it, it would have had to accept saffron support to get parliamentary ratification for President's rule.