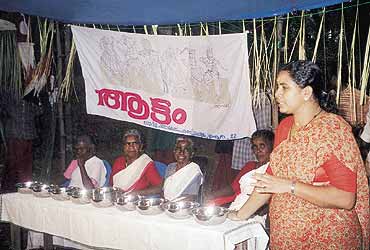 outlookindia.com
-0001-11-30T00:00:00+0553
Dr C.R. Rajagopalan isn’t part of folklore yet. But his Centre For Folklore Studies in Thrissur, a place for collecting, collating and comparing local and traditional knowledge in and around Kerala, is close to becoming one.

But rosy pictures have a downside too. The 12th edition of its quarterly Keraleeyathayude Nattarivu—the primary source of revenue for the centre—was its last issue and now, for want of funds, publication has ceased. In the last issue focusing on children, the editorial was in the form of a confession which translates to: "Nothing is conclusive/Rains don’t come back/No patriarch is reborn/ Birds in flight never return/Once begun with knowledge of the wild/ Nattarivu/Has arrived at the knowledge of games/Played a game, None won/Game Over, Try Again."

"Don’t worry," says Rajagopalan, senior lecturer at the research centre, department of Malayalam at the Sree Vivekananda College, Thrissur. Luckily, publisher DC Books has come up with a proposal to publish all four issues in a year as a single book. The first one should be out in early 2003. Rajagopalan’s affair with folklore triggered a unique activity across the state that soon became a movement. Every other week some village, even remote ones, would play host to a team from the centre which would gather to record tales from the past, as told by the villagers. The village elders would be at the forefront, as their stories mattered most. "Now it has become a more frequent activity. Sometimes every week...," he says. "Villagers gather informally every week on a Sunday or holiday to document their histories. We don’t have to initiate it now, they do it on their own. Soon each village in Kerala will have its history on paper," adds a beaming Rajagopalan.

Nattarivu is a collection of thoughts, images and memories recounted by villagers, tribals and nomadic groups. Rajagopalan has been collecting and putting together the material for the past two decades. His individual effort expanded from stray essays in magazines and newspapers to setting up the centre in 1995 and publication of the magazine. Each issue used to have contributors ranging from scholars and educationists to peasants and hunters.

"All the traditional ways—of study, transmission of knowledge, practical skills—they have all declined due to globalisation," he laments. In many instances, even local medicinal knowledge has been robbed, now patented to outsiders. It was a bid to transform this knowledge into a contemporary living tradition—through folk art forms and other ways of expressions—that he began his studies. "By registering even a piece, the intellectual property right of the ‘local knowledge’ is established. So this makes the whole activity a celebration of local people and their traditions," he says.

But Rajagopalan, strapped for funds, has drastically cut down activities now. "I am already deep in debt from the publication of the magazine. We are currently trying to sort that out," he says. The centre’s efforts to raise cash by forming a performing art group, Karinthalakoottam, has also come a cropper. "Though we have engagements through the year, the performances aren’t bringing in any revenue." The group’s renditions of tribal songs and folk music are gaining in popularity though their two volume-audio recording wasn’t a commercial success. "We can’t seem to find support groups though the moral backing of the people is there," he says.

"I am driven by my quest for the unknown. That’s my way of saving the world," says Rajagopalan of his life’s work. Digging into the past is a means to protect the future. As he puts it, the known is a mixture of fact and fiction. And the unknown is folklore. The truth. To find out more, contact: Dr C.R. Rajagopalan, Centre for Folklore Studies, Kanimangalam P.O., Thrissur, Kerala-680027. Ph: 0487-425227, e-mail: nattariv@md3.vsnl.net.in, www.puzha.com

(Clarification: the correct e-mail address of the animal welfare ngo Anthra, featured in the October 21 issue, is anthra@vsnl.com)

The Burden Of Expectations