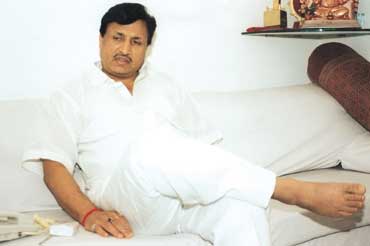 outlookindia.com
-0001-11-30T00:00:00+0553
Sinners will be punished," Shanti Devi, mother of murdered poetess Madhumita Shukla, says when told that preliminary tests have proved that the DNA samples of the six-month-old foetus her daughter was carrying at the time of her death matched the blood samples taken from BSP MLA and former minister Amarmani Tripathi. Madhumita's murder on May 9 had caused a sensation in Lucknow and the needle of suspicion ever since had pointed consistently towards Tripathi with whom she was alleged to have had an affair.

Though the DNA tests are preliminary in nature, they have become the talk of the town. On September 5, a close relative of Madhumita told Outlook that the family's suspicions had been confirmed: "We were all awaiting the DNA tests (result). Now that it's come, it's for the CBI to do the needful and arrest the guilty." CBI sources say Tripathi will now have a lot of explaining to do.

The investigating agency has already interrogated him on four occasions. He was quizzed in Delhi and the day the preliminary results came in, his wife Madhumani was being interrogated in Gorakhpur. Probing the 'jealousy' angle, the CBI questioned her about the alleged call she received from Madhumita's Paper Mill Colony house soon after the murder.

A week ago, the CBI had also produced computer images of the murderers. These sketches were drawn on the basis of details provided by Madhumita's domestic help Deshraj, who is the sole eyewitness to the gruesome murder. Madhumita's mother and sister Nidhi have identified one of the assailants as Amarmani's domestic help Pinku, whom he had loaned to Madhumita in the early days of their courtship and recalled after things went sour.

With the DNA result, the CBI says it can now produce Madhumita's diaries and her letters as corroboratory evidence to prove her links with Amarmani. In one of her letters Madhumita writes "how gradually the man who doted on me once had almost turned insensitive. Consequently, my phone line was cut, the servant was taken away, the car was gone". She also felt she was gradually losing her hold on him. A line from her diary during the period reads, "Mera adhikarkshetra kam ho gaya hai (my area of influence has lessened)." The relationship took an ugly twist when Madhumita turned stubborn about her wish to have the baby after she got pregnant for the third time in three years.

Amarmani's affair with the poetess began on November 22, 1999, as recorded in her diary. Her resistance to yet another abortion was expressed in what seems to have been the last letter she sent to "Mantri ji". In the five-page note, she clearly wrote she would not terminate her pregnancy this time. The letter also mentioned how she had been assured till four months of her pregnancy that she could have the baby. She felt cheated that she should suddenly during the fifth month be asked to have an abortion. Determined to have the child, she wrote: Kya maine sapne nahin sajaye (haven't I nurtured dreams)?"

She also said that having been pregnant for six months, she had developed motherly instincts towards the baby and it had become impossible for her to have an abortion. Had she obeyed Amarmani's diktat, she would perhaps not have died that fatal afternoon, alleges her kin.

The DNA results have taken the steam out of Amarmani's belligerence. Soon after the murder, he had told Outlook, "It is best if the DNA tests are carried out." He had reasoned, "Doodh ka doodh aur paani ka paani ho jayega (the truth will eventually be out)." But now that the truth is really out, the former minister of state has every reason to be nervous.

And even more so since the change of guard in UP. Not knowing Mulayam Singh would assume power, he had used the strongest of words against the man who had then insisted on speedy investigations into the case."It will be best that Mulayam Singh first looks into his own conscience," Amarmani had said.

But the tables have now turned. With Mulayam in power and the CBI tightening the noose, this is one wall Amarmani can only bang his head against.