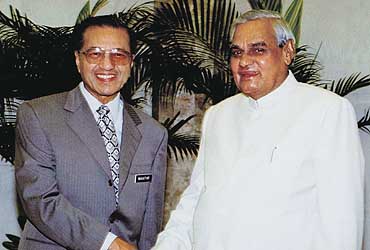 outlookindia.com
-0001-11-30T00:00:00+0553
Indian Prime Minister Atal Behari Vajpayee flew out of Kuala Lumpur last week with a mixed bag of results. He didn't get what he expected from his four-day visit, nor could he dispel the inherent suspicions about New Delhi's regional ambitions, despite its decision to exchange its role as the Soviet pointsman in Asia to that of a US satrap. Worse, the bilateral discussions didn't yield anything of tremendous significance, either for the present or even the future.

It's true innumerable MoUs (memoranda of understanding) were signed between Indian and Malaysian companies. But these mean nothing, unenforceable as the agreements are. This is especially true of Malaysia, which has perfected the art of signing MoUs with foreign countries, especially those in Africa, Central Asia, and the South Pacific. It initialled a whopping 600 MoUs with Papua New Guinea, almost all of which were not pursued. "One should not pay much attention to these MoUs," says former Malaysian ambassador to New Delhi Ben Haron dismissively.

Vajpayee arrived in Malaysia on Sunday (May 13) evening, attended a dinner hosted by Malaysian businessmen, with a formal welcome the following day in the new administrative capital of Putra Jaya, 30 km from here. He had a private one-hour meeting with Malaysian Prime Minister Seri Mahathir Mohammed. Curiously, there was no formal call on Yang Dipertuan Agung, Malaysia's elected king. He visited the Petronas Twin Towers, the tallest buildings in the world. But the pace seemed punishing for the 77-year-old leader.

Malaysia is prepared to let Indian companies bid for projects here in return for counter-trade payments in palm oil. Indeed, the railway and bridge building projects given to Indian Railways and l&t were paid for in palm oil. "When Vajpayee agreed to accept Indonesian palm oil for defence equipment, it jolted Malaysia out of its policy of keeping India at a distance," says Haron. Malaysia is now keen to sign similar contracts with India.

And for good reason. Malaysia's smallholders produce palm oil but its market prices are lower than the country's cost of production. It has a huge inventory of palm oil and it can't offload without incurring further losses. That's a prime reason for the Malaysian government wanting India to reduce the duties and taxes on edible oil, which New Delhi has promised to look into.

Malaysia looks to India for servicing its MiG and other fighter aircraft, and for future purchases of defence equipment. It wants to do that with counter-trade in palm oil, as was the deal India struck with Jakarta. The price of palm oil is a sensitive issue here. It could bring down the government, especially now when it is caught in the political maelstrom the incarcerated former deputy PM, Anwar Ibrahim, had unleashed. Nor could New Delhi promise huge cuts in the duty on palm oil export because of the possible backlash from its own farmers.

But hopes were dashed not just bilaterally. India wants a higher profile role in asean (Association of Southeast Asian Nations), the 10-country regional bloc with which, as Vajpayee noted in a lecture, it has a 1,600-km border. But Malaysian officials disagree. India's role in Southeast Asia is quietly challenged here, especially following New Delhi's effusive welcome to the US' National Missile Defence system. The dominant view here is that India's seeking to become a US satrap to contain China. Indeed, the US-China rivalry, though not mentioned explicitly, cast a pall over the talks, what with New Delhi and Kuala Lumpur harbouring divergent views about Washington.

Vajpayee's public lecture on "India and asean: Shared Perspectives" sought a more visible role for India in asean, a far cry from the membership it had earlier wanted. Ironically, in the '60s, New Delhi turned down tentative feelers to join asean. It subsequently found itself blocked out even as a dialogue partner because its foreign policy seemed inextricably entwined with the Soviet Union's. (asean members were opposed to Communism.) It became one in the early '90s, only after Russia won for itself the dialogue partner role.

Diplomats and analysts here say India can't hope to improve further upon this status. "India exchanged the Soviet umbrella for the American," notes one Malaysian analyst, "and asean is not keen for India to be more active in either role."

Indian officials are incensed at this view but it is a perspective New Delhi will have to overcome before it can hope for a change of attitude in the region. That Cuban leader Fidel Castro, who was applauded for his enduring opposition to US hegemony, left a few hours before Vajpayee arrived only shows, as a European Union ambassador notes, that India would have to try harder to persuade Malaysia and asean to accept its new worldview.

All this points to the continuing friction between India and the region. New Delhi has long neglected this region and when it does exhibit interest, its geopolitical quarrel with China intrudes. China, on the other hand, has resolved most of its border disputes with the countries in the region. Says a former Malaysian ambassador, Jack de Silva, "China is prepared to use its diaspora to build bridges, with a long-term aim in mind. India does just enough to keep itself in good odour in the region."

Silva thinks India can be overbearing in the conduct of its diplomatic or commercial affairs. "It's a fact," he notes, "that India has not won a single major construction contract through open tender." Since good political relations usually follow strong economic links, it isn't surprising that New Delhi fails to arouse much enthusiasm in Southeast Asia for its geopolitical objectives.

No wonder then that only protocols on visa exemption for diplomats and for double taxation were signed, but the one on extradition got caught in a bureaucratic mesh. Italian businessman Ottavio Quattrocchi, accused of receiving a bribe in the Bofors deal, will hence continue to find Malaysia a safe haven until the lengthy—perhaps interminable—judicial proceedings culminate to the bjp's satisfaction.

Indo-Malaysian relations are stuck in a groove because of past hurt and mishaps. It improves incrementally at best. Malaysia remains uncertain about New Delhi because it wouldn't come to its assistance even while it unstintingly supported India's causes—against China, against Pakistan. For instance, during the Indo-China war in 1961, then Malaysian prime minister Tengku Abdul Rahman launched the Save Democracy Fund in Calcutta; again, the Indo-Pak war of 1965 saw the Malaysian ambassador in the UN vehemently criticise Pakistan. In contrast, India stayed away from the 1963 dispute between Indonesia and Malaysia and turned down Kuala Lumpur's request for assistance in tackling ethnic riots.

Malaysia wanted India as a dialogue partner in asean till 1974 but New Delhi ignored the overture. Thereafter, the regime in Kuala Lumpur became more pronounced in its Islamic orientation and consequently adopted a neutral approach to the Indo-Pak rift.It made New Delhi increasingly suspicious of Malaysia. Says Haron, "New Delhi then started to take positions contrary to asean when it need not have. So long as India remains preoccupied with Pakistan, India's intentions for a larger role in the region must necessarily fail." There is a tinge of that in the present. Southeast Asia looks to India the same way the US businessmen look at China: the billion people as consumers of the products they manufacture. One could perhaps call it the goods news.

This rehab home is a double blessing—it's for disabled orphans