For The Sake Of Indipiti

In the Myanmar jungles, the Khaplang faction has a functioning system in place 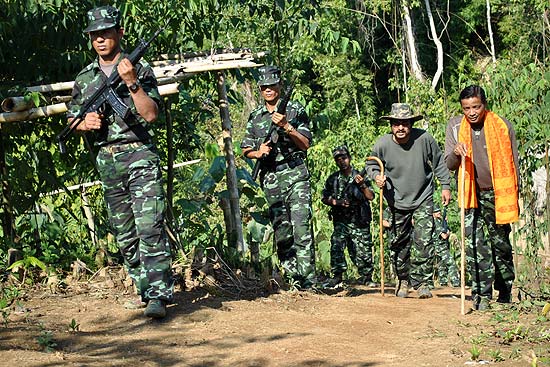 Twenty kilometres north of Mon in Nagaland is a narrow road that meanders up and vanishes into the blue hills. The thin line that serves as boundary between India and Myanmar is indistinguishable and beyond this line is a camp on the foothills that is the biggest military camp of the rebels. This is also the headquarters of the NSCN(K) and one of the entry points to eastern Nagaland.

We stayed overnight at this camp to wait for an ULFA squad to arrive and escort us for a meeting with Paresh Barua. The trek would be long and dangerous, we were warned. A long and exhaustive list of dos and don’ts also arrived in the mail. The trek took us through over 30 villages inhabited by the Konyak, Lainung and Pangmi (all Naga tribes), countless rivers, hills and vegetation often too dense for even sunlight to filter through. Sometimes we would pass through landscape laid bare by slash-and-burn cultivation.

Every other day we would reach camps of different groups and meet cadre, chat with them. Popular supp­ort for “indipiti” (independence) and the rebels appeared overwhelming.

The NSCN(K) system required every household to assist all rebel groups by turn. Every family was required to accommodate four rebels whenever they halted at night. Young men fetched water, firewood and helped locate houses where vegetables and rice could be purchased.

The next morning other households would depute members (“sakhan”) to carry the bags to the next destination. As a thumb rule, the groups would leave early as the guides had to return in time to attend to their fields. The rebels seemed to be wary of the Myanmar army, avoiding areas with military bases. “After all, it’s the Myanmar army, it can never be trusted,” an elderly Naga quipped by way of explanation.

The rebels, especially the Khaplang faction, were at war with the “tatmadaw” (as the Myanmar army is called) for two decades till they reached a ‘written accord’ in April 2012. While observers in Yangon and Nay Pyi Daw describe it as an informal understanding, the rebels insist there is a written agreement. The army agreed not to raid villages or exact forced labour, collect taxes and disturb rebel camps. In return, the reb­els agreed to allow the army to appoint teachers for the Naga children in the region, hoist Myanmar’s flag and share information.

Khaplang also runs a ‘government in exile’ but unlike the NSCN(I-M) in Nagaland, which has been allowed by the Indian government to maint­ain a regular ‘army’, Khaplang foll­ows a policy of ‘mandatory military service’ for three years for all able-bodied men and women in his area of influence. Every household is expected to pay an annual tax as well.

By Rajeev Bhattacharyya in Guwahati

(Bhattacharyya spent four months in rebel camps in Myanmar. His book, Rendezvous with Rebels, came out in 2014.)