For The Mentally Disabled, Muskaan Means A Smile In The Mind's Eye 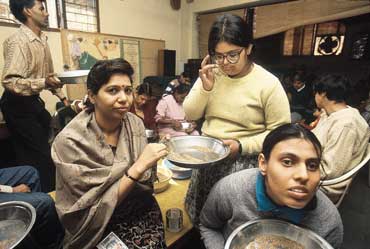 Shagorika Heryani January 15, 2001 00:00 IST For The Mentally Disabled, Muskaan Means A Smile In The Mind's Eye

outlookindia.com
-0001-11-30T00:00:00+0553
It’s the proverbial light at the end of a dark tunnel. For Mrs Srinivasan, a housewife in a middle-class Delhi family, life couldn’t have been more difficult with two mentally challenged sons and a hostile educational system unwilling to give them a fair chance. She knew that both 20-year-old Ravi and 17-year-old Ramji had it in them to defeat Down’s Syndrome, a chromosomal abnormality resulting in a flat face and nose, short stubby fingers, a vertical fold of skin at the inner edge of the eye and mental retardation. But she had a problem: she didn’t know where to go. Confused and disappointed, the much-aggrieved mother then heard about Muskaan, an association for counselling parents and giving vocational training to mentally challenged adults, and didn’t think twice before she got them admitted in 1992. Today, she is a proud mother—Ramji recently won a medal in regional special Olympics. Says she fondly: "Ravi, now 28, was a painfully shy boy eight years ago and could only say one word—‘amma’. Today both my sons speak fluent Hindi. Ravi is fond of singing and once he starts, it is difficult to stop him!"

This then is not an isolated success story among the estimated 20 million mentally challenged people in India. But, this is not to say that their condition is any better. The exact figure is not known because they are excluded from the census—nothing could be more revealing of the prejudices in society. For their parents too the experience is equally harrowing and traumatic.

Take, for instance, the trauma and confusion of Dr Shanti Auluck, a PhD in psychology herself, in dealing with her 22-year-old son Puneet. The anguish and disappointment over her fate and a lackadaisical educational system were not hers alone. There were many others who shared her burden. But they refused to be party or victim to this silent apartheid. In 1982, at the suggestion of Dr I.C. Verma, then head of the genetics opd at the All India Institute of Medical Sciences (aiims), New Delhi, a small group of parents pooled in their resources to start Muskaan. Says Dr Auluck, its vice-president, "We realised that to secure proper conditions for their development, we had to create them ourselves."

From three students and two teachers in a tiny garage eleven years ago, Muskaan today has 11 teachers looking after 40 students. Aged anywhere between 18 and 50, these students are enrolled for a three-year programme after they have completed their basic educational training. Says Mrs Neera Chawla, principal of Muskaan: "We are a big family here. We learn together, help each other and share our joys and sorrows." The trainees make everything from masalas and candles to greeting cards and stationery items, which are then marketed and distributed by volunteers including students and parents. Besides imparting such vocational skills, Muskaan also works on the social communication and cognitive skills of the trainees. Asserts Dr Auluck: "We are not just interested in giving them job skills but in their overall personality development. Our aim is to improve their quality of life."

She adds that they also seek to get the trainees absorbed into mainstream society, to give them the confidence to be at par with others in an unprotected environment. Sadly, the number of handicapped people employed in corporate India today stands at an abysmal 0.40 per cent. Muskaan hopes to remove this social prejudice.

The ball was set rolling last year when Disha, a Delhi-based export house, employed five trainees from Muskaan. Says Rashmi Paliwal, the managing director: "Someone has to step in and help these people, especially when the society seems to have given up on them. Their disability is not a hindrance at all and they are just like the others in my office." Adds a determined Chawla: "Next month six more trainees will join a post office in the mass mailing department. It’s been an uphill task but at Muskaan we never give up. Every trainee here is a challenge and an inspiration. All they want is a fair chance and a friend to call their own." The association plans to shift to a new campus in Vasant Kunj which will also house a vocational training and work centre, a diagnostic, counselling and research centre and an integrated primary school.