For The Greater Common God 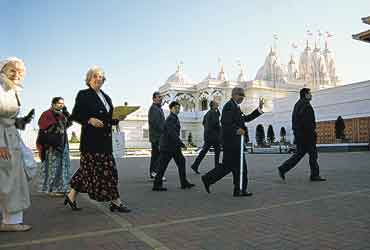 outlookindia.com
-0001-11-30T00:00:00+0553
And who shall speak for the Hindus to British authorities? The gods themselves, it seems, are taking Hindu groups different ways. The one patchwork face put together over recent months is rent now into different temples, an ugly spat having broken out over the hierarchy of divinities here.

The National Council of Hindu Temples (NCHT), which had brought major temples and Hindu groups together in Britain, is now split after the Swaminarayan temple withdrew. Differences among the Hindu leaders on NCHT paralleled a Hindu divide over who worships which god. Such differences within Hinduism are hardly new, but in Britain they determine which of these voices will carry to the government.

The spectacular, vip-pulling Swaminarayan temple was a prominent member of the NCHT along with the Hare Krishna temple in Watford, north of London. Called the Bhaktivedanta Manor, it was donated to the Hare Krishna movement by ex-Beatle George Harrison. The NCHT also spoke for most of the other 140 temples in Britain, temples where prime importance is given to Ram and Krishna, unlike the Swaminarayan temple which has its own supreme deity.

The positioning of the gods within that picture postcard Swaminarayan temple in London goes to the heart of divisions now cutting through British Hindus. The pecking order in the pantheon is linked to the relative political weight of the adherents.

A fairly small Ganesha sits in a minor shrine to the left within the sanctum sanctorum, with Hanuman opposite to the right. A few steps up Ram and Sita stand in the small shrine to the left, with Shankar and Parvati opposite. The pride of place goes to three figures of Sahajanand Swami who led an influential Hindu movement in Gujarat in the early 19th century. He died in 1830 aged 49.

This temple was built by the Akshar Purushottam Sanstha, a sub-sect within the Swaminarayan sect. Followers here believe that Sahajanand Swami, now worshipped as Swaminarayan, was an incarnation of Krishna in his early days, and for that period of his life is referred to as Shri Harikrishna Maharaj, as also appellations like Ghanshyam. His followers believe Ram and Krishna were earlier incarnations of Swaminarayan, and that the process of godly evolution culminated in Bhagwan Swaminarayan.

There are variations on this essential theme, but here stone speaks more eloquently than words. The first of the main shrines shows small figures of Harikrishna Maharaj made in gold and other metals along with Krishna and Radha done in stone. The central shrine shows a life-size figure of Bhagwan Swaminarayan with his two chief devotees, while the shrine on the right houses the figure of Bhagwan Swaminarayan standing alone as Ghanshyam. Belief that places Swaminarayan above Ram and Krishna is set in stone and stated in scale.

The Akshar Purushottam Sanstha believes Bhagwan Swaminarayan will always be manifest through a living guru, at present Parmukh Swami Maharaj, based in the Akshardham temple in Gandhinagar. He is not seen as god, but as godly. On a recent visit he blessed London with petals from a helicopter, was driven from the helicopter to the temple in a devotee’s Rolls, and stepped in over a rangoli of flowers. On his birthday, he was taken around the temple in a chariot drawn by devotees in celebratory uniform. A small figure of Swaminarayan is always carried before him; Parmukh Swami is after all believed to represent the divine principle of Swaminarayan.

Hindus outside the Swaminarayan sect refuse to see Parmukh Swami as godly, or even a manifestation of godhead. A view of Ram and Krishna as only earlier incarnations of Sahajanand Swami is "completely, completely unacceptable", says a devotee at the Hare Krishna temple. Such differences cut to the root of the divide between the Swaminarayan temple and most others. This temple’s decision to break from the NCHT is defended as administrative, but many devotees see it as a manifestation of much more.

Given its position as prime port of call for British leaders and royalty when they want to espouse solidarity with Hindus, this temple probably does not need the NCHT or the rest. NCHT leaders are now telling British officials they must speak to a more widely representative Hindu group, not to one Hindu temple.

There is much to talk about. British authorities are expanding consultations with religious groups in many fields. The Home Office is setting up a Faith Communities Unit (FCU) to replace the old Community Cohesion Unit of which NCHT was a member. The new department will deal with all issues relating to faith groups. Anyone who speaks for Hindus here carries much weight with the establishment, and with the community.

Money too could be in access here. "Temples have received grants only on two occasions for health promotion activities, to counter diabetes and heart disease which are very common among Hindus," says Bimal Krishna Das from the NCHT. "But we need funding for infrastructure, to improve the condition of so many temples that are poorly maintained because they have no funds."

Then there are issues like objections raised by the Department of Environment on the scattering of ashes, flowers and coconuts in rivers now that many Hindu families begin to find the Thames and other British rivers a holy enough substitute for the Ganges for last rites. Or issues like visas for priests brought over from India, legal issues around portrayal of Hindu gods in media, asylum reforms that look at Hindu interests, Hindu dietary requirements in institutions, or new advice to employers on Hindu sensitivities following a directive from the European Union last December.

Security too is a constant issue. The NCHT has held several meetings with the Home Office and the police on improving security at temples. It has recently also been talking to the Community Security Trust (CST) set up by the Jewish community to protect its synagogues. The CST is now actively assisting some Hindu temples in improving security.

Most groups are now looking to their own to defend their interests. Like the temple being built in Wembley by the Vallabh Nidhi group, coming up as a third major temple in London, and having both Ram and Krishna prominent in the pantheon. Devotees, primarily of Ram, do not boast a major temple in London, and turn to the Ram kathas held by Morari Bapu in the summer. "Ram resides in hearts, not in temples," Morari Bapu pronounced at the end of his katha in London last summer. This invisible temple has a huge following.

Just weeks ago, a couple of Christian fanatics smashed the deity of Ram at the temple. A new group trying to set itself up as the British Hindu Forum demanded six months in jail for one of the arrested Christian fanatics in place of the two-month sentence the magistrate handed him. They looked for a common response to the incident. But none of the leaders of other groups attended a meeting called by this group. A resolution proposed by the new forum setting itself up as the sole point of communication with British authorities too had to be withdrawn after it ran into cold silence. It must be nice to talk to the British, if not to god.