Home  »  Magazine  »  International  » Chemical Alley »  For That Whiff Of Chlorine

The US-led missile assault on Syria was based on dubious information. India should be wary of such pious, dangerous outbursts. 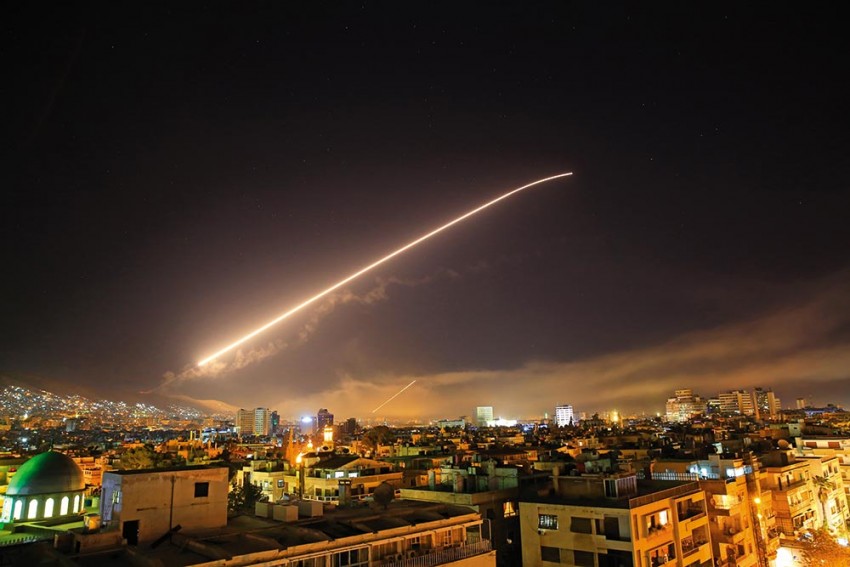 A US missile streaks the Damascus night sky on
Photograph by AP
Pranay Sharma April 19, 2018 00:00 IST For That Whiff Of Chlorine 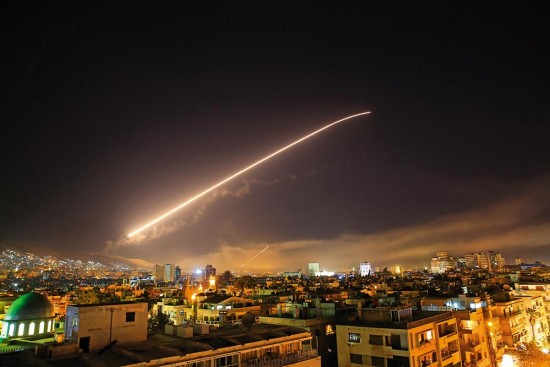 If it was meant to rally world opinion behind the prompt punishment meted out by three leading Western democracies to Syrian President Bashar al-Assad’s murderous regime and for his predilection for using chemical weapons on his own people, the script seems to have gone quite awry.

Instead of cheering the US and its two NATO allies—the UK and France—for their April 14 missile attacks on Syria, the motives for their action are being questioned around the world. Were they aimed more at saving their own proxies in the Syrian conflict? Was it also a response born out of their respective domestic compulsions? Or was it the plight of hapless civilians in this strife-torn nation that forced their hand?

Even though Donald Trump proclaimed ‘Mission Accomplished’ after the missile strikes—shadowing another such dubious declaration 13 years ago—serious doubts remain on whether chemical weapons were indeed used on civilians on April 7 in Douma and, if so, if it was actors other than the Syrian army who were behind these dastardly acts.

The US-UK combine is perhaps not the best entity to convince people about the veracity of a chemical weapons attack, since the world, and especially West Asia, still has fresh memories of their bogus claims of WMDs in the possession of Saddam Husain’s regime to justify their 2003 invasion of Iraq.

Several hundred sea- and air-launched missiles were shot at Syria, apparently targeting the government’s chemical weapons facilities. But none were aimed at either Russian or Iranian assets in Syria, even though the two countries are regularly pilloried for being the main backers of Assad. Syria says only three people were injured in the attacks.

Amidst claims and counter-claims by the major actors in Syria, analysts and reporters are trying to cut through the thicket of ‘fake news’ and orchestrated propaganda to get to the raw, unvarnished truth, which is elusive as ever.

“The information war has been eleva­ted beyond the status of an adjunct to the conflict on the ground to the point where it is now a key and crucial front in itself,” says an independent observer.

For many countries, including India, the dev­elopments in Syria have import­ant lessons. One, ‘fake’ news on WMD att­­acks on civilians can lead to a larger mil­­itary conflict in the region. Two, any country that resists the line of the US and its allies may come under huge pressure and unwelcome scrutiny. India may not be a pushover, but the unquestionable faith some of its policy planners seem to have in the US needs a reality check.

“In the not too distant past, we have faced such malicious propaganda by the US and its Western allies on Kashmir,” says former Indian diplomat Talmiz Ahmad. “There is no reason to feel complacent that it may never happen again in future,” he adds.

The Organisation for the Prevention of Chemical Weapons—the international body in The Hague to deal with cases of use of chemical weapons—has formed a fact-finding team to investigate developments in Syria. Indian ambassador Venu Rajamony says, “The alleged use of chemical weapons, if true, is deplorable. We call for an impartial and objective investigation by the OPCW.” 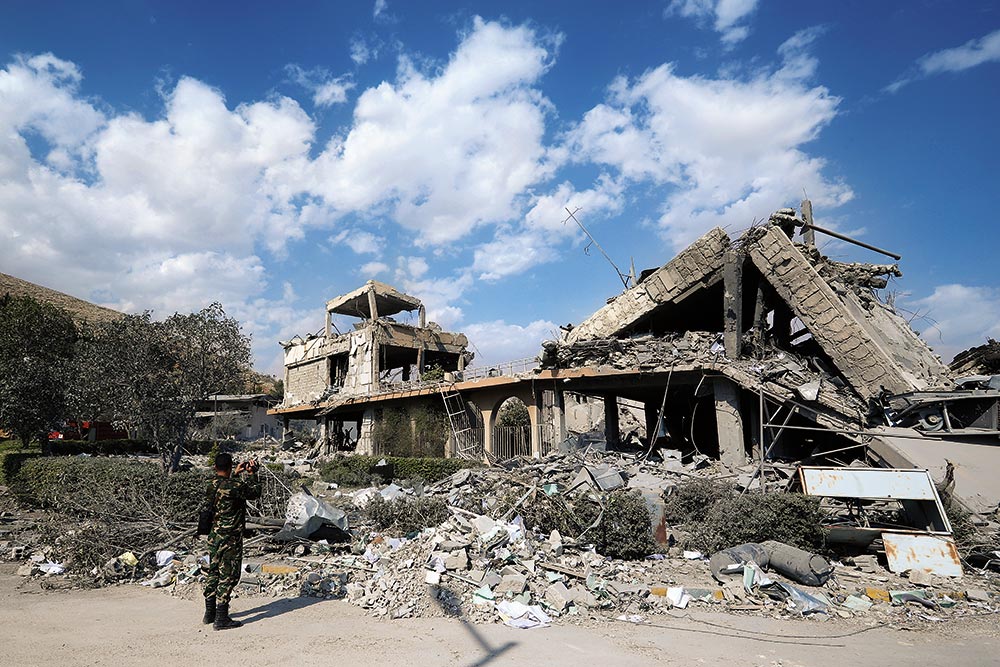 But neither the US nor the UK or France was in a mood to wait for the OPCW’s final report. They felt they had enough ‘evidence’ to act unilaterally. Interestingly, all three, as well as most Western opinion-makers, appear to rely on information provided by Syrian rebels and opposition outfits of Assad’s use of chemical weapons on civilians.

According to the BBC, “Activists from the Violations Documentation Centre (VDC), which records alleged violations of international law in Syria, reported two separate incidents of bombs believed to contain toxic substances being dropped by the Syrian air force” in the town of Douma in East Ghouta, the rebel-held area to the southwest of Damascus.

But the VDC, a Switzerland-registered human rights body operating in rebel-­controlled Syria, had been citing reports from the Syria Civil Defence—whose workers, known as ‘White Helmets’, have a dubious track record. The White Helmets emerged at a time when opp­osition fighters were under pressure from government forces, say observers. Furthermore, these volunteers have only worked in rebel-held areas and are seen to be closely linked with the Al Qaeda-affiliate in Syria, Jabhat Nusra. They supplied most of the information about the two-day use of chemical weapons and its effect on hapless civilians, especially women and children.

According to the VDC, more than 500 patients were brought to hospitals in the rebel-held areas. “The patients showed signs of ‘respiratory distress, central cyanosis (blue skin or lips), excessive oral foaming, corneal burns, and the emission of chlorine-like odour’, One woman who died had convulsions and pinpoint pupils,” it said. While the initial figure of deaths from these attacks was put at 150, later it was brought down to 70; finally, the agreed figure seems to be 43 deaths.

However, all the graphic description of suffering meets with scepticism. Russian officials and other independent sources who visited Douma claimed hospitals and doctors there did not report any case of treating victims of chemical weapons attacks. Instead, they pointed out that video clips posted by the Syrian rebels showed White Helmet volunteers without any protective gear (which a ‘chemical attack’ would necessitate) while ferrying victims to hospitals.

“Either the chemical weapons attack in Douma is nonsense or Bashar al-Assad is the stupidest man on the planet,” writes John Wright in Sputnik International. He argues, “Simply, because the potential consequences attached to Syrian military forces carrying out such an attack...would be catastrophic.”

The proof of the attacks VDC offered to the West came from the White Helmets, who’re closely allied to Al Qaeda affiliate Jabhat Nusra.

As the argument goes, the Syrian army, generously backed by Russia, was already heading towards ‘complete success’ in East Ghouta and did not need chemical weapons. Douma remained under the control of Saudi-backed Jaish al-Islam and other Salafi groups, particularly Jabhat Nusra. Russia recently brokered a deal for these fighters to move out with their families to other safer areas.

But there was a split within the Jaish al-Islam, between those who wanted peace and move out and those who wanted to stay and fight. This also coi­ncided with Trump’s announcement in late March that the US would withdraw its troops from Syria soon, sending shock waves among US allies, especially Saudi Arabia, which naturally feared an outcome in favour of its rival Iran.

Conveniently for many, reports of the chemical weapons attack came at a juncture when the Syrian army is in the ascendant. For regional US allies, it was important to ensure America does not take its eyes off Syria. Observers also pointed out domestic compulsions in the three nations that prompted these leaders to take action.

“Trump has his hands full with the various allegations about his many transgressions; including his having been in collusion with Putin et al,” says C. Uday Bhaskar, director of Society for Policy Studies.

Likewise, British PM Theresa May is battling the Brexit fiasco and a revolt within her own party, and French pre­s­i­dent Emmanuel Macron is facing unr­est over his economic policy—both have enough reason to use such safe, diversionary tactics.

For Trump, who had been talking of a detente with Russia, the challenge—to come out tough against Syria and Russia while under pressure from hardline US establishment—is stiffer. But significa­ntly, despite the anti-Moscow rhetoric, US and Western missiles carefully avo­ided Russian assets in Syria. If punitive tactics have real bite, they may not have such a tame ending. They evidently heed Russia’s rising note of displeasure.