For Some, A Ready Ansar

Is the outfit a handy name to bandy about or the local face of foreign terrorists? 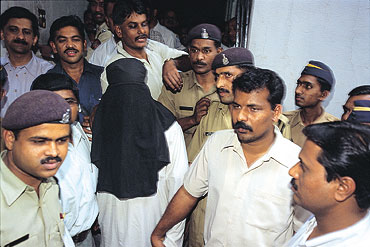 outlookindia.com
-0001-11-30T00:00:00+0553
The Students Islamic Movement of India or SIMI was founded in Aligarh in 1977 by Mohammad Ahmadullah Siddiqui, professor of journalism and public relations at Western Illinois University, Macomb, Illinois. An offshoot of the Jamaat-e-Islami Hind, SIMI's members are young extremist students, whose aim is to declare jehad against India and establish an Islamic state. While SIMI's original bases are in UP, it has spread to Delhi, Bihar, Madhya Pradesh, West Bengal, Kerala, Gujarat and Maharashtra over the years. In Maharashtra, it's said to have a presence in Aurangabad, Malegaon, Jalgaon and Thane.

Investigating agencies are now almost sure the Mumbai blasts were planned and carried out by LeT with crucial assistance from SIMI activists. The outfit had been banned and declared unlawful under the Prevention of Terrorism Act in 2001. The ban had been reinforced by the Union home ministry on February 8 this year. And, just five days before the Mumbai blasts, the Supreme Court had rejected a plea to lift the ban.

Intelligence sources claim that SIMI has managed to stay alive because of political connections, particularly in the Samajwadi Party. SP Rajya Sabha MP Abu Azmi has been accused of being a SIMI sympathiser. Some sources even claim the UP government recently sought legal opinion on whether cases against SIMI activists in the state can be withdrawn.

The alleged role of SIMI 'ansars' (full-time cadres) has come to light in several attacks, including the March 7 Varanasi blasts, which killed 15. The group was also said to be behind the explosion in the Shramjeevi Express near Jaunpur, UP, on July 28 last year, which claimed 10 lives. The October 29 blasts in Delhi last year are also believed to be the SIMI's handiwork. It is estimated to have 700 ansars and 40,000 ordinary members.

What's really worrying intelligence agencies is that SIMI is providing logistic and local support to foreign terrorist groups. For the Varanasi blasts, it had teamed up with the Harkat-ul-Jehad-al-Islami, Bangladesh; for the Delhi blasts with Jaish-e-Mohammad, and for the Mumbai blasts, it chose to help the LeT. Most believe SIMI is giving a local face to the unknown terrorist. On the flip side, there are those who say they're a handy name to bandy about when intelligence agencies have nothing. One thing's for sure, though: an operation of the scale of Mumbai couldn't have been mounted sans local recruits.