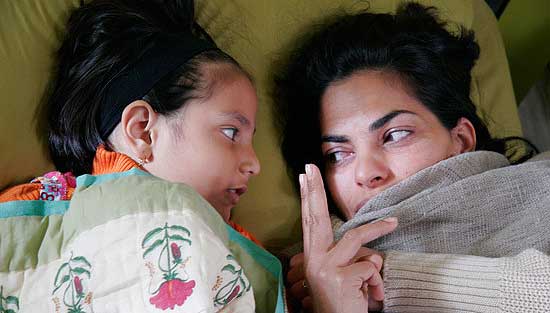 Sona Jain’s debut film has its heart in the right place. It’s a sensitive and believable look at how domestic strife and violence can impact on a child’s psyche. Much of this works because the kid at the centre of action, Shruti (Zoya), comes up with a finely-tuned performance. She is not cutesy, precocious and irritating as Bollywood kids normally are. In a case of well-thought-out casting, Jain gets the right feelings and expressions out of the untrained Zoya. The stubbornness, suspicions, vulnerability, introvertedness and unspoken fears and pains get nicely communicated.

A polar opposite to this is the portrayal of the crumbling marriage. At the start of the film it seems as though Jain doesn’t want to give a detailed explanation to the audience about what went wrong in the relationship and how. She seems to remain focused on the inner world and fantasies of the child. How she wants to travel to the Orion galaxy and thinks her mother is not for real but an alien. How she even decides to run away from home to escape her mom. However, slowly the back-stories bring past into the present and the film loses its grip. It also tends to get dull and dreary.

The two individuals and their relationship, rather the lack of it, is unconvincing enough. The unhappiness and lack of communication remains sketchy and is not credible enough. The busy doctor-father (Adil Hussian) seems to just sulk through the film. The nri mother (Sarita Choudhury) who left a career as a singer to get tied to domesticity seems to just immerse herself in the bathtub to brood. In the middle of it, there’s also the nice psychiatrist friend (Sameer Dharmadhikari) trying to figure out the child’s problems but unable to be of any use to the parents who are actually more in need of help. The sudden resolution, the acceptance of their situation by both the husband and wife, and their coming together seems just as unreal. What’s more, despite strong actors like Hussain and Choudhury, the performances seem more automated than felt, the conversations staccato than normal. It’s an interesting first film which could have been so much better.