For Blood And Oil

James Baker pays a secret visit to Delhi, with a twin agenda 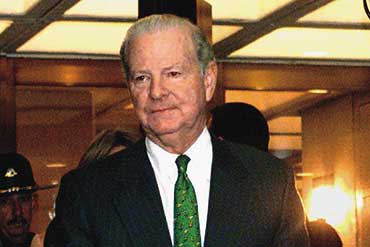 outlookindia.com
-0001-11-30T00:00:00+05:53
The visit was shrouded in total secrecy. Only a few dozen people in India knew that James Baker, former US secretary of state, Texan oilman and close confidant and key strategist for the Presidents Bush, both former and current, visited Delhi last fortnight.

Western diplomatic sources confirmed that during the closely-guarded visit, Baker met senior officials of the Prime Minister's Office, and the external affairs and petroleum ministries. The agenda was three-pronged:

"Mr Baker was on a private visit and stayed with US ambassador Robert Blackwill at Roosevelt House," Gordon K. Duguid , information officer at the US Embassy, revealed to Outlook.

Though MEA officials remain tight-lipped on the visit, it's reliably learnt that Baker sought India's support for the Allied Forces in their planned attack on Iraq. While the US considers Iraq a terrorist state, India has traditionally maintained good business and trade ties with it.

Besides buying oil from Iraq, India also has been the largest exporter of electrical equipment to the Arab nation. For instance, of the $750 million that Iraq spent on its electrical needs in the last three years, India bagged almost half. This could quadruple in the near future. Iraq's minister for commission of electricity, Sahbaan Mahjoob, visited India post-9/11, and indicated that Indian exports could be upped to $700 million in the next two years. "India's increased business with Iraq is an area of discomfort," a senior Western diplomatic source said.

It was not immediately known whether Baker met Vajpayee. Besides the diplomatic manoeuvring with the PMO and MEA officials, he made a presentation to petroleum minister Ram Naik and heads of state-owned oil and gas companies. He also extended a personal invitation to Naik to visit and address the James Baker Institute of Public Policy in Texas. "The basic idea was to dissuade Indian companies from investing in Iraq," a top western diplomatic source said, adding: "Investments to the tune of $600 million have been planned by ONGC and Reliance for Iraq."

The two companies have signed an MoU with Algeria's Sonatarch to secure an oilfield in Iraq for production of crude. ONGC Videsh Limited (OVL) has sought to form a venture with two other partners to produce crude from the Tuba oilfield. Besides, ONGC is awaiting approval from its board to invest approximately $63 million in Iraq block 8. Both ONGC and Reliance refused to comment on Baker's visit.

"Mr Baker also exhorted Indian companies to join hands with American oil majors for explorations in Nepal," said a senior petroleum ministry official. ONGC is well-placed to buy a 50 per cent stake in two exploration blocks in Nepal, owned by the Houston-based Texana Resources. Ministry sources agree that the state-owned company's investment in the two blocks were of strategic importance to India as they were located near the Indo-Nepal border.

Block 3 in Nepalgunj and block 5 in the Chitwan region were awarded to Texana by Nepal under a production sharing agreement. "Texana will conduct detailed exploration, including seismic work to further define drilling locations," said Texana president Max Mazy, adding: "We have high hopes and strong indications that the potential exists for world-class hydrocarbon resources in Nepal."

Baker's interest is understandable. First, a joint venture will help US companies understand the difficult terrain.And secondly, it will help US oil majors stave off rival interests. Two Chinese companies—China National Star Petroleum and National Oil and Gas—and Pakistan's Oil and Gas Development Corporation had also expressed an interest in the blocks.

'I Don't Pretend To Be An Indian'