Right time, right place. It was 1857 that made Mangal Pandey, not the other way round. 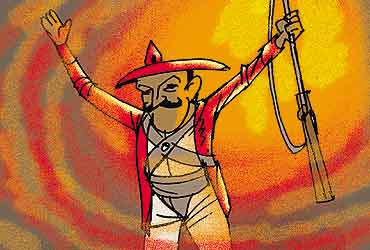 Mangal Pandey: Brave Martyr Or Accidental Hero?
By Rudrangshu Mukherjee
Penguin Pages: 109; Rs 150
San sattavan and Ghadar, the one standing for the digit 57 in the Gregorian calendar, and the second an allusion to the World Turned Upside Down, can refer only to 1857. It cannot be 1757 or 1957 by any stretch of the imagination, historical, literary or filmic. There has not been any such year in our recent past for a long, long time. Those who died or lived through it, of course, experienced it in all its gory materiality.

What a summer it was: the Company bahadur’s sepoys mutinied at Meerut on May 10th and trooped all the way to Delhi, banging furiously at the rajghat darwaza of the qila-i-mualla, gaining entry, killing and driving out the British officials and civilians from that nominally Mughal city. A small group of Britishers clutching for dear life on the Flag Staff on the city’s northern Ridge, biding their time and awaiting reinforcements from the Punjab, which allowed them in mid-September to recapture, pillage and destroy so much of the city that was Shahjahanabad.

News of the fall of Delhi, starched with rumour, precipitated mutiny and ‘civil rebellion’ in a large arc in northern and central India. The Raj was on the run. Land-holders, peasants and townfolk, maulvis and pandits joined hands, often in disconcert with the sepoys. The Ghadar was truly on...a blur of killing, plunder and inversion without a clear storyline, except perhaps the ironed out ‘universal fact’, as a British historian put it, ‘that the Black Man had risen against the White’.

Did Mangal Pandey, the Purabiya-sipahiya from among the east-UP bhaiyyas, really ignite the spark for that summer’s ghadar when he strolled on to the Barrackpore parade grounds on March 29 that year, calling his comrades to take up arms against the sahibs?

There is no dispute over the bare facts. As Rudrangshu Mukherjee points out in ‘this slim volume’, a reflection of the paucity of real information on this 26-year-old sipahi, with seven years, two months and nine day’s service in the Company’s army, no one joined him openly. Mangal Pandey went on shouting a common sisterly obscenity, which still punctuates male conversation in north Indian towns and villages. He shot successively at two English officers, unsaddling the second with a wound to his horse. And then engaged the two in an eight-minute sword-fight, injuring both of them seriously. Some of the other sepoys hit these officers with the butt of their rifles, but did not join him openly. Nor were they identified by any one, not even by the injured officers.

As this mini-mutiny was on, Major General Hearsay, his two sons in tow, galloped towards Mangal Pandey. Rather than bring the commanding officer down, Mangal discharged his gun into himself. A week later, an injured Mangal was brought before a native general court-martial, presided over by Subahdar-Major Jowahir Lall Tewary and 14 other UP subalterns, and sentenced to death. At his trial Mangal Pandey proffered no information about his motivation, aims or objectives. He neither cross-examined the witnesses, nor harangued the court. He admitted to taking bhang and opium of late, but maintained that he had ‘acted on my own will’. The records of the regiment showed him to be of a ‘good character’, the equivalent of today’s ‘clean skins’.

There is almost nothing about Mangal Pandey, independent of his March 29th act, in the contemporary historical record. He figures as a ‘fugleman’ in an important 1860s demi-official British history of the sepoy war, and then of course as the first martyr of 1857 in subsequent nationalist writings. Mukherjee’s verdict is cutting: ‘Mangal Pandey had no notion of patriotism or even India.... If love for his country drove him, he would not have become a sepoy in the first place.’

In the absence of a ‘life history’ of the famous Pandey, Mukherjee elects to sketch a context. Apart from the polluting cartridge, the high-caste purabiya sepoys felt a threat to their monopoly and perks within a closed-shop Bengal army. The sepoy was being made to bite the bullet, both literally and metaphorically: following this order would be the induction of new recruits from the lower castes into the army. It is because Mangal’s defiance and execution took place just before the actual events of 1857 that has made the two appear a part of a single connected story, inviting fresh accretions. It was 1857 that made Mangal Pandey, and not the other way round.